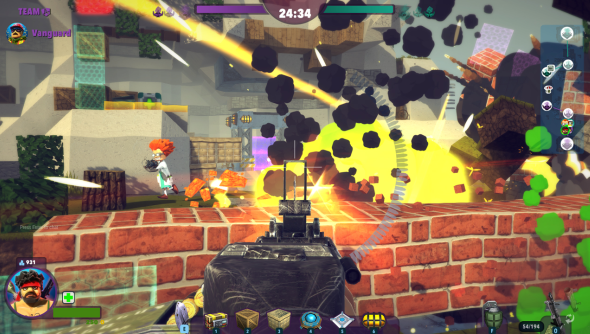 Block N Load is a fast-paced team shooter from Jagex in which two opposing teams fight to destroy one another’s base using all manner of weapons, abilities and wiley, tunnel-digging tactics.

Julian and I visited with the developers in Cambridge at an event recently, during which Julian unfortunately died.

Sadly, Julian’s excellent writing will no longer appear on PCGamesN, as he is dead now. He got a paintball lodged in his throat and suffocated in front of my eyes. He’s gone for good now and we must all learn to accept that.

Rumours that he has, in fact, left PCGamesN to work at rival site Kotaku UK are just that: vile, awful, sickening rumours that we simply cannot abide or come to terms with on even the most basic emotional level.

We wish Julian all the best. (In death.)

And if he wants to come back, he can, although he should be aware that due to a small fire that was started partly in anger, his desk is no longer functional or there.