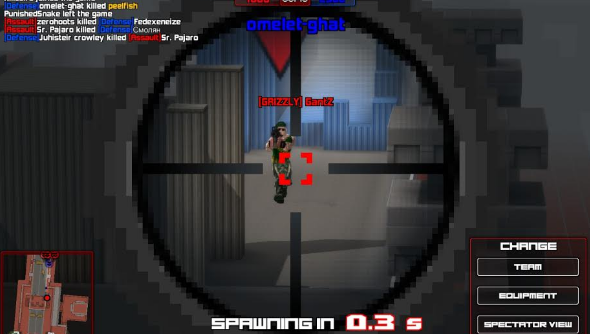 For a few years now, there’ve been Minecraft servers that fold the game’s capacity for construction and destruction into a deathmatch format – and lately the movement has spilled out onto Steam, with a growing subgenre of deformable first-person shooters: Ace of Spades; Blockstorm; Blockalicious; Block Sabbath; Back to Block.

Not all of those names are made up. Today I’ve been playing Blockstorm – an FPS that’s been in Early Access since June and garnered some very positive user reviews since.

Time to block ‘n’ load. Ah, somebody did that one? Bums. 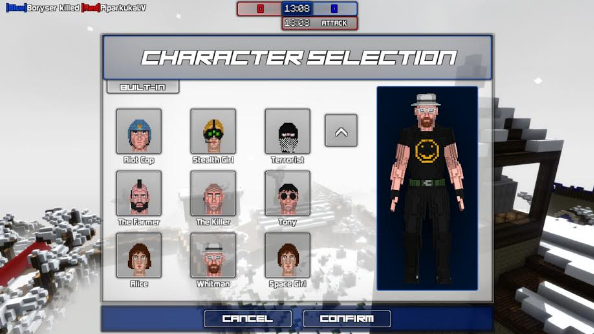 Blockstorm’s maps are made up of cubes, and its characters of many far smaller cubes that I’m inclined to call voxels, and which the developers also call voxels, so let’s call them that. Shootouts tend to look like an animatronic meltdown at the Legoland log flume.

With the entire game rendered in coloured blocks, players are free to customise their own levels and characters using an in-game editor. They can then share their creations with the community, which perhaps explains why Blockstorm’s sensible soldier skins are accompanied by, variously: a minotaur; a curly-’tached chef; a copyright-flirtatious ‘Stealth Girl’ with Splinter Cell goggles; and a man who is unmistakably Walter White.

After choosing ‘Castle Battle’ mode because it wasn’t Deathmatch or Capture the Flag, I found myself on the battlements of a fortified structure – and there in the middle distance was the enemy’s equivalent castle, upon which I could just about make out a belltower. A thickening fog took hold as I descended between candy-floss trees, and realised that it wasn’t just Minecraft’s shovel that Blockstorm was interested in. 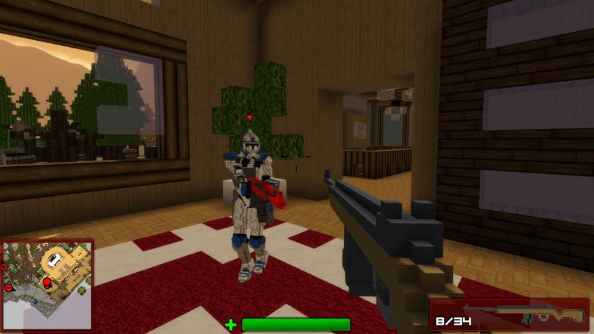 Numbers 1 to 3 on the keyboard are taken up by weaponry, but 4 is by default given over to grenades – instant craters.

Number 5 is dedicated to an infinite number of team-coloured blocks you can plant about the map as impromptu cover, platforms, bridges, and so forth. It’s a possibility that’s best exploited by unlearning some ingrained FPS behaviours. Rather than check a blind spot for incoming gunners, for instance, you’re better off closing off the route entirely.

Camping, meanwhile, has been turned from a sin into an art. Instead of retreating to known corners of the map, I’ve seen players digging their own trenches – and then taking chunks out of the victims that fall in.

Armed with a long-range rifle, I built a staircase along the outside of my team’s battlements and hopped to a nearby tree, around which I was able to fashion a crude crow’s nest. I left buffering blocks on either side of my shooting spot, and proceeded to shoot holes in the distant enemy fortress. One exchange with another sniper felt like Enemy at the Gates, excect that both of us took regular breaks to adorn the buildings of Stalingrad with extra buttresses.

It didn’t win me many points, though – and it’s as a traditional FPS that Blockstorm reveals itself to be a bit of a square. Developer GhostShark’s preoccupation with construction mechanics seems to have allowed them to forget shooter principles; jump or drop from any height and you’ll travel through the air as if through water. Quake this ain’t. 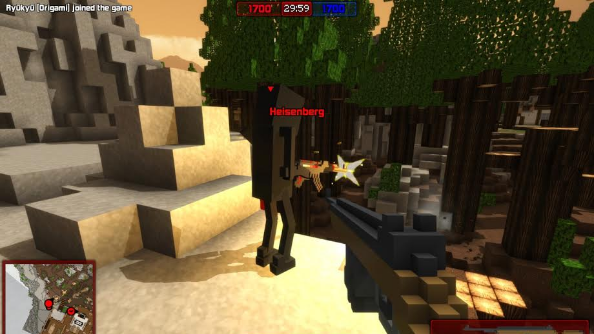 What’s more, equipment defines movement speed. A player who gracefully accepts the standard rifle and grenade is rewarded with mere sluggishness – but a sniper who dares try out the one-use rocket launcher can expect to play as a self-placing turret.

An assault map consisting of one, long bridge saw my team repeatedly traverse the flat terrain in slow-motion to meet a bullet at the other end, and demonstrated perfectly why Blockstorm’s balance solution might not be the most entertaining ever conceived.

But on better maps, like the forest interrupted by rocky outcrops and bordered by a multi-level mansion, Blockstorm feels a little like I imagine Rainbow Six Siege might. Players shot through walls to create shortcuts that persisted for subsequent spawns – and their enemies planted C4 to catch them in the openings they’d made.

You know how rally games sometimes promise that your indents in the mud will affect each subsequent lap? Blockstorm is like that, only your permanent changes to the world are large enough to appreciate. It’s oddly reminiscent of Worms in that way.

The shooter’s loading screen depicts a series of connected cogs, whirring round in interdependent motion. In reality, some of its cogs don’t quite fit – and many of its parts fail to move.

But in those inevitable isolated moments of a multiplayer match, it’s quite special to be encouraged not to chase after the nearest fight – but to burrow down and do something with your immediate surroundings instead. Blockstorm’s perhaps not the finest example of the idea on the market – but then, I’ve just been killed by Gordon Bloody Freeman.