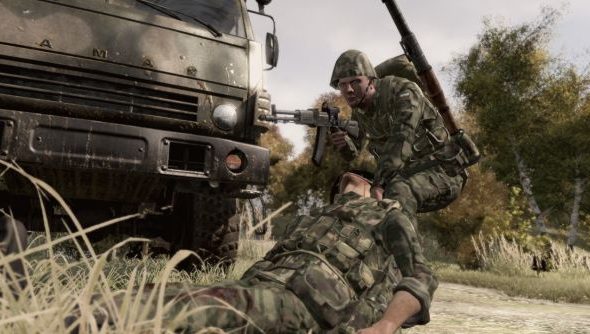 If I were a soldier, I think the best non-physical combat training I could ever do would be to play ARMA. It might not be as realistic as actually going on a live training exercise, but damnit it tries. It’s not surprising to learn that the US Army has similar thoughts, but rather than just get all their troops to simply play ARMA, they’ve assigned Bohemia Interactive a mission to make a new training game.

The ‘Games for Training’ contract sees Bohemia team up with simulation developer Calytrix to work on a five-year program. Based on the Virtual Battlespace 3 simulation, Bohemia’s game will be used by the US Army, Marines, Australian and New Zealand Defence Forces, Canadian Armed Forces, Netherlands Ministry of Defence, and the Swedish Armed Forces.

This isn’t Bohemia’s first contract with the military. They previously made Virtual Battlespace 2 in 2009, and will be using that game as a basis for the third iteration. This will allow missions and scenarios from the previous game to be imported into the new simulation, rather than requiring frequently used drills and situations to be remade for a new engine.

If ARMA isn’t punishing enough for you, civvies can buy Virtual Battlespace 3. You’ll have to purchase VBS2 from the Bohemia Simulations Store, and you’ll receive an upgrade to VBS3 when it is released in early 2014.