A game’s soundtrack can get a bit of a rum deal at times. With a visual spectacle unfolding before your eyes, it’s easy to forget the music swelling behind. But it’s there doing its job in the background – like a bass player in a rock band, it lends structure to the moment and helps it pop. Whether it’s the thunder of the drums on Martin O’Donnell’s Finish the Fight as your Warthog barrels toward the end of Halo 3, or the subtle difference between a gunshot that slaps and one that splats, good sound and music is an essential component of immersion.

The Borderlands series is no exception to any of this. Imagine coming under fire from its Mad Max-style goons, and answering with one of its one billion guns, in eerie silence. Or, worse, imagine the music being wrong – imagine arriving at one of its many futuristic vistas, a dark monolith rising from an alien landscape, and cool summertime reggae starts up.

Composers Brian Lee White and Brian Trifon of Finishing Move, who have also lent their talents to Crackdown 3 and Halo 2’s Anniversary edition, helped to craft Borderlands 3’s soundtrack. We spoke with them to see what went into shaping the game’s sound.

PCGN: Re-imagining the Halo 2 score must have been quite the task; how did you go about it?

Brian Trifon: For Halo 2 Anniversary, we wanted to keep the spirit of the original. It was a larger team of people – Paul Lipson, Lennie Moore, Tom Salta, and us. We all focused on different things.

Brian Lee White: We were not given any material other than just the raw in-game assets, because there’s a little bit of controversy over the original material, so we did not have a score to reference. We had to re-transcribe directly from the assets.

BT: Just from the recordings, yeah. We had to listen to it and figure out what it was. One of the challenges, and a big part of our job, was to focus on the electronic elements in there, which obviously can’t be played by live musicians, so we had to program [them] and create new sounds for them. We wanted to stay true to the actual notes and melodies, but update the sound with something more modern.

Oh yeah! I bought a $150 cello from a builder on Craigslist

One of the cool things about that project was we got to hire Steve Vai, because he originally played on the Halo 2 score ten years before, so we got to bring him back to play guitar.

What attracted you to Borderlands 3?

BLW: Musically, Borderlands has always been really eclectic. It’s had electronic elements, guitars, and things like that. That’s a place where we shine in our production – the stuff that’s not just your traditional orchestra-only score, but these eclectic world elements, and electronic elements. It was cool to be able to add our sound to the Borderlands sonic landscape.

BT: I think Borderlands is a perfect playground for that too, because it’s a ridiculous, over-the-top game with this irreverent sense of humour. It just allows for all kinds of music, and high-energy stuff, too. So we can have some pretty heavy industrial-sounding things mixed in with world textures and electronic music. We get to combine so many different things that we like – it’s a lot of fun! 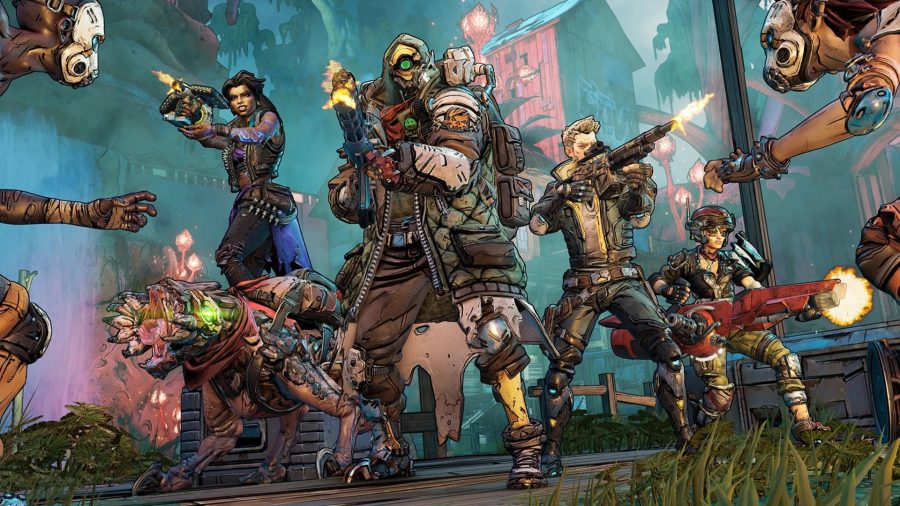 Did you try to convey any of that humour through the music?

BT: I think for a lot of it, we didn’t try to hit it on the nose. In music you don’t always want to just mirror exactly what’s happening, and we don’t want to be slapstick. The elements of humour come across in the game. I think it’s more that you want the feeling that it’s badass – the irreverence is what we want to come across about the humour. Part of that is a big ‘F U’ middle finger, and that’s about having music that is energising and aggressive, but also fun, and expresses a depth of emotion too, so you feel present when you’re playing.

But there were moments where we played up some of the humour. There’s a boss fight in a motorcade where [a broadcast] has a commercial break – but I don’t know if we can give spoilers about that!

BLW: There’s one track where we did get hammy with the guitar, kind of like some Dimebag Darrell riffs. It’s rad and visceral, with some nods to different musical styles and things like that. There are lots of custom sounds where you hear it, and it’s very signature – you’re like ‘oh, wow, what’s that sound?’ It gives you this juice because your ears perk up and you go ‘oh man, that’s a weird sound, this is a weird alien planet we’re on!’

That’s cool, just tying all those alien elements together with the landscape. We did a lot of work on Pandora, which is a desert planet, so we had these desert-style Mad Max elements that seem rusted and old but gnarly, and really catch your ear. 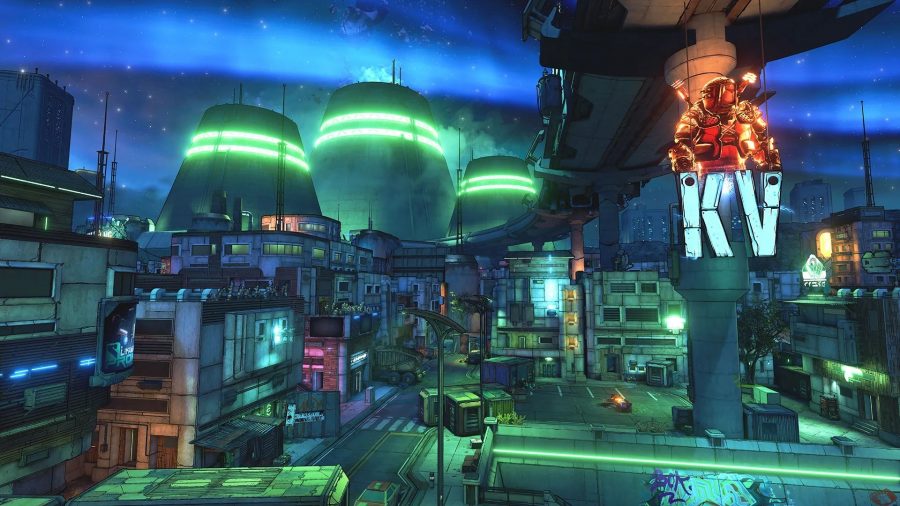 Sounds can come from wonderfully weird places – like how Ben Burt recorded R2-D2’s beeps by making baby noises through a synthesiser, or the tills in Pink Floyd’s Money. What are some of the weirder things you’ve used in Borderlands 3?

BT: We’ve got some pretty weird sounds in there. One of the ones I liked is this – I don’t know what you’d call it, like a whirly pipe or something. It’s a kind of plastic pipe that you twirl around like a toy, and it makes a constant pitch, but if you twirl it faster, it goes through the harmonic series. I got it at a dollar store.

So it’s just a toy, but I ended up recording that and turning it into a sampled instrument. It’s pretty beautiful and haunting. That’s one of them, and we recorded a lot of scraping metal sounds as well.

BT: Oh yeah! I bought a $150 cello. A good cello is usually many thousands of dollars, but this was a $150 cello that I found on Craigslist from a builder. It actually works pretty well, but I don’t know how to play the cello at all, so I used it to make a lot of low, stringed, scraping sounds. It’s more using it as a way to make musical sound design, rather than to play Bach’s cello suites or Elgar’s cello concerto or anything like that. 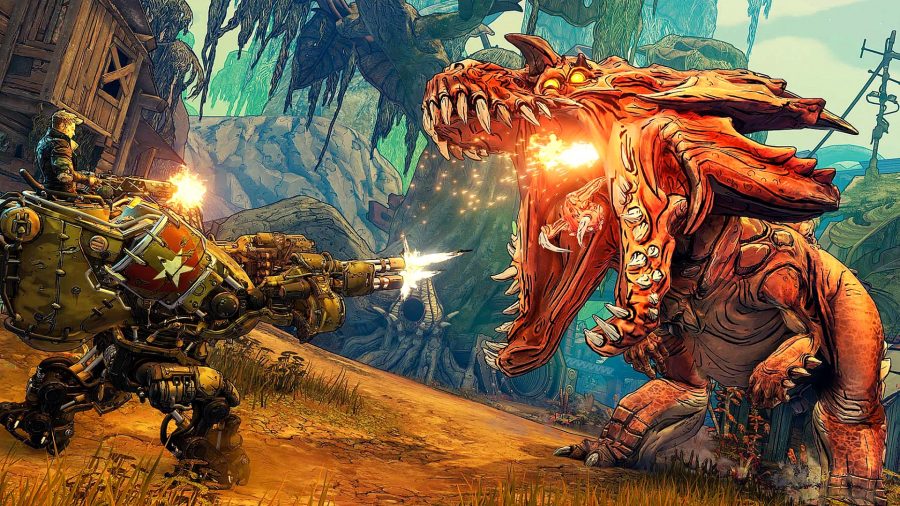 Aside from that, it’s pretty conventional tools, but just things that we really like, so lots of guitars, pedals, amps, analogue synthesisers, vintage synthesisers, filters and things like that.

BLW: We have a long history of designing sounds that we keep private, just for our own composition. So anything that we do is going to have ten years’ worth of custom recordings we’ve made and kept over the years, like this old wedgwood oven in [Brian’s] apartment years ago.

Sound design gives the sense of a real experience, whereas music heightens emotion

BT: Yeah, that’s something we still use a lot, basically in everything. In my old apartment, the oven door made a squeaking sound, and it was kind of a constant pitch. So at one point, I recorded that and then just processed it, so the pitch was a little bit more even, and then mapped that out as an instrument. It’s haunting and beautiful, but in other contexts it can also be a harsh, aggressive metallic sound.

Do we hear the oven in Borderlands 3, then?

BT: Absolutely, there’s the oven, the whirly pipe, and all kinds of other weirdness. 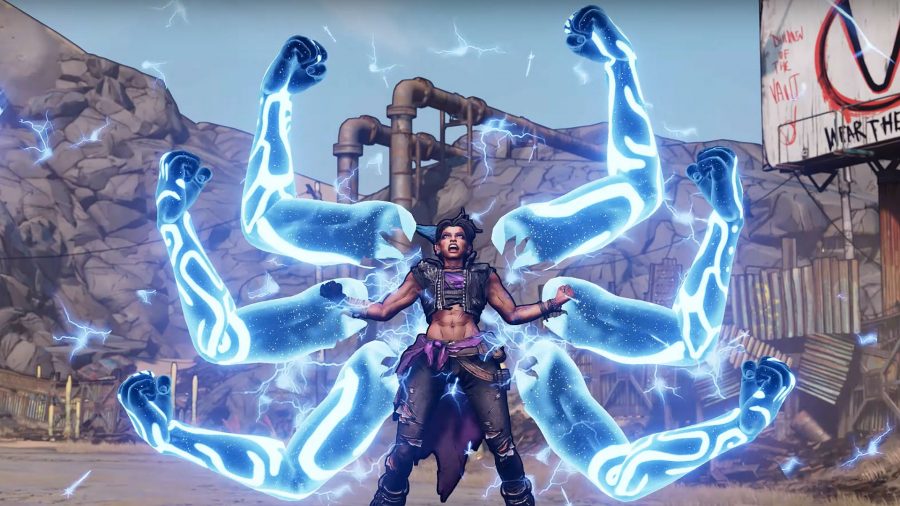 BT: Absolutely – I think there are two elements of that. Music really brings out the emotion in everything you’re looking at, and it can also help with the setting – like just the landscape. And then the sound design and ambience is really what makes it feel present and real, like that’s what gives it the sense of being a real experience, whereas the music is what heightens the emotion.

If you watch any [game], or film or TV show for that matter, with no music and no additional sound design beyond just what the boom mics on set pick up, it feels pretty empty. It’s hard to watch, even the most amazingly well-acted things. The sound brings it to life, in my opinion.

BLW: Yeah. We do a lot of Hollywood trailer content, too, and that’s really where these signature sounds have to sell a whole movie in one or two minutes, and really make the visuals pop. And so a lot of our sound design ethos comes from ‘how do we catch people’s attention so that they’re drawn in to whatever world we’re scoring?’.