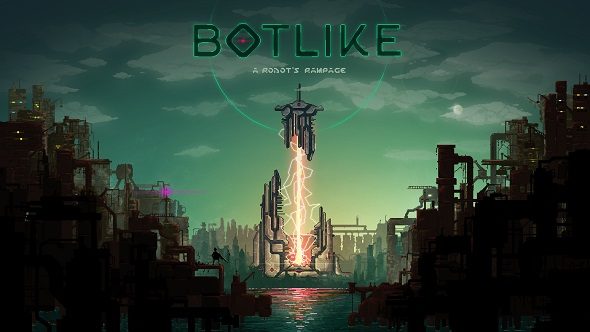 While you’re probably tired of hearing the words ‘permadeath’ and ‘procedurally generated’ in the same sentence, hold on for just a second. Developer Binji is hoping to revitalise the roguelike with fast paced shooting, intense platforming and a dash of humour in their new game, Botlike.

For more games from the little guys, check out our list of the PC’s best indies.

Tasking players as the retired robot S.I.R, you are forcibly recommissioned after your house gets destroyed by a giant tsunami, caused by the totalitarian robot regime that now rules Earth. Galvanised by the loss of his home and the deaths of many of his fellow retired warbots, S.I.R digs out his old top hat, rocket launcher and minigun, and decides to overthrow the world government. You know, just like in the good old days.

As a rusty old machine, S.I.R must pilfer the parts from newer robot models in order to continue his campaign of destruction. By combining items together, S.I.R can create special super items or even stronger monster items to decimate hordes of enemy automatons. He’s not completely clapped out though, as S.I.R’s air dash and double jump allow him to outmanoeuvre the legion of robots who are out to stop him.

You’ll acquire quite the arsenal of weaponry as you journey to avenge your home. S.I.R can collect to high powered sniper rifles, energy cannons and rocket launchers during his quest, which can be all be upgraded using the scraps harvested from fallen enemy bots. You’ll definitely need them for the boss robots at the end of each randomly generated level. Do be careful that you will lose all of your phat loot when you die, so don’t get too attached to that super-powered laser blaster.

Currently on Steam Greenlight, Botlike is looking to enter Steam Early Access sometime in the summer.