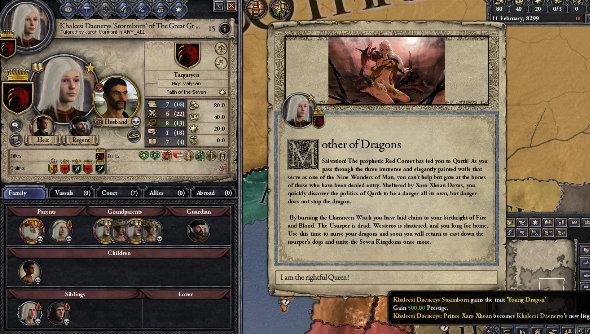 If you’ve been enjoying the Game of Thrones mod for Crusader Kings 2, you’ll probably have noticed there is a little something missing. The clue is in the continent that you’re currently ransacking: Westeros. Yup, the blood-stained landmass is only the western side of George R.R. Martin’s fantasy world, with the eastern side made up of Essos. This eastern territory is home to the savage Dothraki horse lords and some lovely fashions, but more importantly it’s the current digs of fan favorite Daenerys Targaryen, AKA the Mother of Dragons.

It’s time to get very excited, as Dany and her armies are about to start playing the game of thrones thanks to the Essos update. Will she win, or will she die? Well, it depends on how good your strategy is, I suppose.

The Stormborn and her three dragonets will provide the main strain to Game of Thrones’ Essos update. “Daenerys is obviously a very important character in the Song of Ice and Fire,” explain the mod’s developers on their discussion board, “and so we have given her a detailed event chain that spans the Clash of Kings and Feast for crows scenarios to try and recreate her story for the player in the mod.”

If you’re not well-read in the Song of Ice and Fire series, or not yet caught up with the HBO series, then shy away from this next bit, since it could be considered a bit spoilery.

“The main chain will follow her progress from Qarth to Astapor where she claims an Unsullied army,” they continue. “From there the player must defeat the other cities of Slaver’s Bay, and will hopefully one day eradicate slavery and return to Westeros. There are a few tangents the player can go on as well, maybe you will choose not to go to Slaver’s bay and go straight to your homeland to reclaim your birthright?”

The Essos update also bolsters the mod with the new features granted by Crusader Kings 2’s Sons of Abraham DLC, with the Cardinal system retooled to fit the Game of Thrones fiction. The High Septon will, of course, be put into power by the vote of a Council of the Most Devout. Similarly, pop-up events will we peppered with a Game of Thrones flavouring.

Prepare yourself for the return of the rightful heir of the Iron Throne, and begin plans to retake her kingdom and people. Brace yourself, the Essos update is coming December 17th. Download it here.