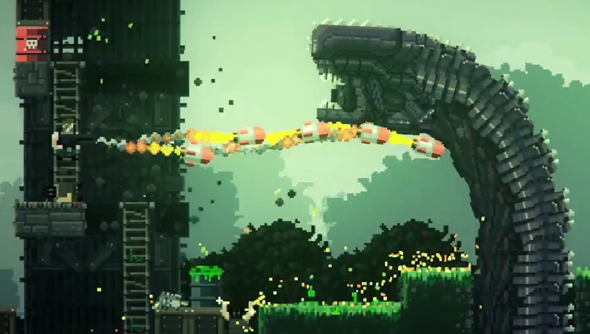 It’s been months since the last major Broforce update but it’s been worth the wait. Free Lives have added the aliens of LV-426, or at least something looks a damn sight like them, to the Vietnam forests of Broforce.

If you’ve tired of fighting the screaming blood-filled soldiers that have been in Broforce since it launched then you should try out the xenomorphs; they’ve acid pumping through their veins and have no problem with hunting down humans.

See the aliens at work in the Alien Infestation trailer:

Unlike the terrorists, who could only run back and forth on one plane, the aliens can climb walls, leap through the air, and crawl along the ceilings. Terrorists still make their presence felt but if the aliens feed on their fleshy bodies they only grow stronger. Still, as a bro, you’ll kill them all the same: big guns, hot lead, and wilful disregard for property damage.

As before, you can play through the Alien Infestation campaign either in solo or in co-op. However, from the trailer I’d guess solo runs are going to end quickly and bloodily.

All the new alien content is available for mapmakers, too, so expect to see the Steam Workshop filled with Scott and Cameron-inspired levels shortly.

The Alien Infestation update’s already live on Steam so just boot it up to download the new campaign.