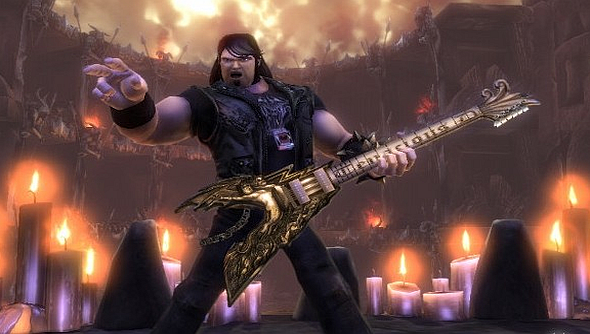 Tim Schafer’s beloved Brutal Legend has been spotted as a new addition to the Steam database. Brutal Legend was an action strategy game released back in 2009 for the Xbox 360 and PS3 and it was pretty good. And it starred Jack Black as a roadie/rocker/hero named Eddie Riggs.

If you poke around the excellent Bronasarium, ID number 19259 will display the results for Brutal Legend in the Steam database.
The game was highly praised by critics for its engaging story and believable vocal performances. Fans of the game have been poking and prodding at Tim and his team for a PC release ever since it graced the consoles.
DoubleFine’s fans have been clamouring for a Brutal Legend PC release for years. The hold up was explained recently by Nathan Martz, studio director from Double Fine who took to the Steam forums to explain the limitations of in game engine, the same one they used for Psychonauts. However he remained positive that they would improve their PC capabilities.
Now it finally looks like some of that positive attitude has paid off.
Also spotted in the database is a “Double Fine Bundle 2013” which contains games such as Psychonauts, Costume Quest, Stacking and the newly discovered Brutal Legend. Keep your eye out as it’s a bundle you’re not going to want to miss out on.