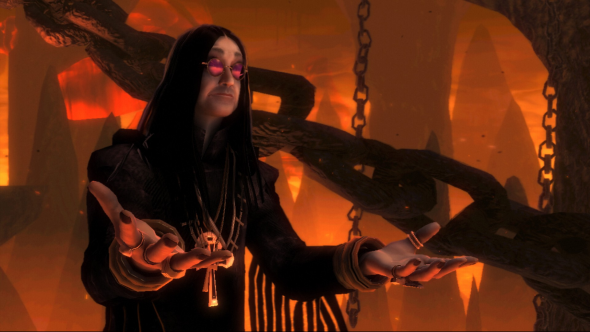 Double Fine haven’t traditionally worked on many sequels – partly out of a surplus of ideas, you imagine, and partly because they couldn’t get publisher approval on them. But they’re finally returning to their biggest hitters, first with another Psychonauts, and, eventually, heading back to Brutal Legend.

Brutal Legend was a strange old sandbox. Here are some of the best.

An E3 panel titled ‘Jack Black in Conversation with Tim Schafer’ understandably led to speculation, and when the pair opened the floor to questions an unseen figure in the audience screamed:

Schafer apologised for giving the impression that Brutal Legend 2 might be announced this week – the panel was simply a public chat between old friends. But he did provide new hope for a sequel.

“Someday we’ll make that game,” he told the crowd, adding that it would be an “expensive” production. It’s hard to argue: the original cost Double Fine and EA $25 million to make, and that was in 2009, when triple-A team sizes were smaller.

That said, Schafer had always warned that Psychonauts 2 would be expensive too, and that game has now entered full production.

Brutal Legend was an ode to heavy metal and real-time strategy all wrapped up in an open-world strategy game. It confused some people, but remains Double Fine’s best-selling game to date.