Bulletstorm’s forthcoming special edition is a way to gauge ongoing interest in the franchise for a possible sequel, but just because it’ll also include DLC that puts Duke Nukem in the campaign, don’t get your hopes up for the King to get another game of his own.

What do we make of the Bulletstorm remaster? Jordan took a look for you.

Duke Nukem’s Bulletstorm Tour DLC, which is bundled free with pre-orders of Bulletstorm’s Full Clip edition, transplants the ‘90s gaming icon into Bulletstorm’s campaign. He gets voice lines and appears in cutscenes. 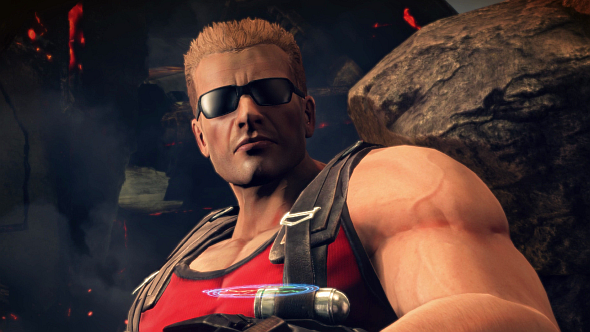 PlayStation fan site Dualshockers got the chance to chat with Gearbox’s Meredith Hershey and Vincent Slaven of Gearbox about all of this. They asked if there was “a way that Duke could also come back in a new game of his”, and whether his Bulletstorm tour was “a way for you guys to gauge interest in bringing him back”. Slaven’s answer:

“Not so much. It’s pretty much like Meredith said that we were trying to think of things we could add to give more value to the customer: Duke Nukem came about [in Bulletstorm] because they were so similar.

“But, kind of in relation to your question, this Full Clip Edition is more or less a way to do that – because People Can Fly own the rights to the franchise fully – and they want to do more with it. And so they are kind of like – because game development is so expensive – they want to put this out to see like “do people still want Bulletstorm?” Is there like a different climate now that would be more receptive? And if it is, there is definitely, probably gonna be an option for a Bulletstorm 2 following this.

This tallies with what we learned when Jordan spoke with Gearbox’s Elliot Hamilton, who said“In theory, People Can Fly would love to do a sequel… but that’s a pretty expensive venture. So this is sort of to test the waters and see if there is interest in a full sequel.”

Bulletstorm: Full Clip edition is on Steam here and will release on April 7, just in time for the weekend. There’s a 15% pre-purchase discount on its £29.99 ($49.99) launch price, and pre-purchases also get the Duke Nukem campaign free.