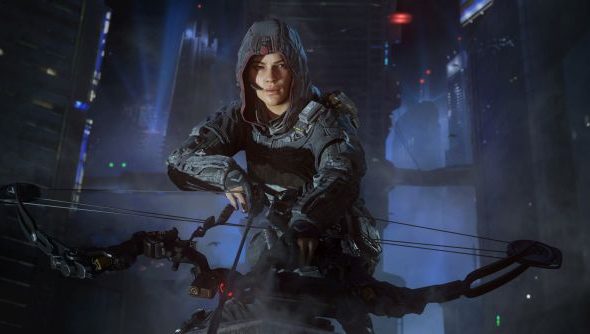 CoD campaigns are odd beasts. As you may have summised from the text lodged at the bottom of that video, this edition’s entry isn’t even playable on the last generation of consoles. For many players it may as well not be there at all, an unused menu option of no consequence. Personally they’re a yearly source of six hours of slightly disappointing entertainment, though several I’ve now not bothered with since it all started going downhill after Modern Warfare 2.

They certainly seem to be getting more sophisticated in recent years, with more cinematic character moments, but that only makes their ridiculous world-ending plots look sillier. The insertion of real-world actor-faces into this year’s is a logical move for what has always been gaming’s closest attempt at Hollywood, but we’ve seen the perils of casting names rather than talented voices for these roles before.

As for Blops 3 itself, it’s looking as ludicrous as the rest of the series and I’m sure I’ll blast my way through it for the good set pieces and a giggle at the plot. Having spent a few minutes with the multiplayer beta earlier in the month, I could get into a bit of that too. Then again, anything that isn’t Titanfall 2 in this style is just a stop-gap, as far as I’m concerned. What will be your relationship with CoD this year?