[Update] The Call Of Duty Twitter account also changed its appearance to mirror a news site, ‘Current Events Aggregate,’ while posting tweets about a fictional terror attack, which may have knock-on effects as to its ‘verified status on Twitter. 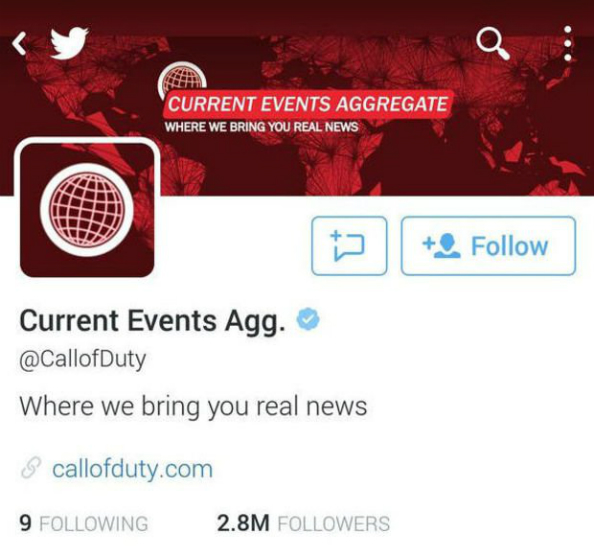 The official Call Of Duty Twitter account sent out a series of tweets to its 2.88 million followers reporting on a fictional terror attack on a densely populated area of Singapore, all in the name of promoting Black Ops III’s story. The tweets are all still live, and no apology has been issued.

“That was a glimpse into the future fiction of #BlackOps3,” reads the final tweet, as if those words would justify the string of preceding tweets claiming that martial law had been declared in Singapore, and that citizens should stay indoors with their doors and windows closed.

“A 30-mile quarantine zone has been established to contain the area until more information is known." pic.twitter.com/0vMKXaxlbA

Now obviously by reporting on this I’m doing exactly what Activision and Treyarch intended. I’m giving exposure to their game, and furthering the message that their game begins with a terror attack on Singapore. Brilliant PR, everyone. Well done. You win.

Pictures from one of these drones show the Coalescence Corporation complex, where clouds of smoke continue to rise. pic.twitter.com/U6mUNYwDjn

But the fact is, somebody actually wrote out these tweets and decided it would be a good idea to send them out to 2.88 million people to promote a videogame. That person first undoubtedly had to check with a group of other people that it would be okay, and those people all agreed that yes, this is a perfectly acceptable way to promote an entertainment product. Then, someone hit the send button. Twenty times.

Authorities have implemented a no-fly order in response to the apparent crash of relief VTOLs heading to the scene of the explosion.

Perhaps the most unsettling aspect of this stunt is found in the replies to those twenty tweets. “Modern Warfare 2 on next gen,” reads one. There’s a picture of a Spongebob meme below another. These aren’t the responses of people scandalised to their very core – they’re replies from people so used to tacky PR stunts that they don’t even break stride in trying to get their favourite game remade.

I suppose the most effective shutdown of this beyond-questionable PR campaign would be to completely ignore it. But instead, can we all just be human beings and privately, silently agree that this type of behaviour is irrensonsible and amoral? That Call Of Duty will still sell millions of copies worldwide without it? And that the world will be a much better place? Cool. Thanks.