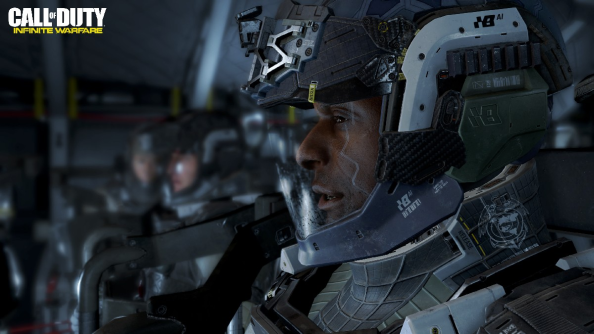 CoD’s latest subtitle, Infinite Warfare, turned out to refer to the infinite – finally plonking players in the spacey void the series has flirted with over recent years.

Why not play some space games in the meantime, since that’s what CoD seems to be now?

It’s a place where ageing consoles can’t find us. A place where nobody has to tiptoe around real-life geopolitics. A place where players can – and I quote – “fly up through the atmosphere, engage in a dogfight over the orbit of earth, finish that dogfight, land on the deck of the carrier, go up to the bridge, and order your ship to go to the next mission”.

That’s Infinity Ward design director Jacob Minkoff, describing the inter-planetary conceit his studio have come up with. Players will upgrade and customise a persistent fighter jet, the Jackal.

“It’s kind of the Top Gun fantasy,” he told IGN. “You get to walk along the flight deck and have the flight crew preparing it for you and saluting you, and you get into it and you fly out into these crazy missions that you chose to go to.”

This is the future, and in the future space is no boundary for fighter jets. The Jackal moves from atmospheric flight to zero-g without trouble, and the same is apparently true for the game – seamlessly switching between earthbound sequences and interstellar dogfights without recourse to loading screens.

It sounds made up, but this is Call of Duty now. A Call of Duty seemingly unrestricted by the older consoles – Infinity Wardhave also confirmed there’ll be no PS3 version.

@samadelo5 no, it will not.

Think you’ll buy it on PC?