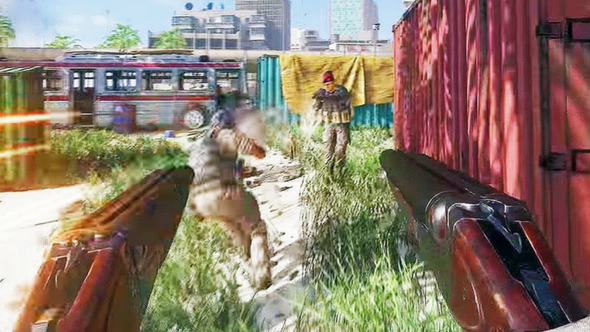 The Call of Duty Days of Summer event may be one of the most ridiculous-looking things Activision have done, but it’s netting Infinite Warfare players a free map, along with a whole swath of other summer-themed content.

Here is everything we know about Call of Duty: WW2.

As the ridiculous surfer guy in the trailer explains, there’s plenty of summer-related regalia to deck both your weapons and soldiers out in, like one with sunscreen on his nose. Check that out.

Interestingly, Call of Duty: Modern Warfare Remastered has its map Bog transformed into Beach Bog, with brightly-colored pool floats, beach balls, and a sandy beach to storm. Infinite Warfare players get an additional map in the form of Turista, and all players get two free gifts coming when you log hours in-game on Wednesdays and Fridays.

The event is live now, and it’s running all the way through August 1. So if you’re itching to get back into Call of Duty: Infinite Warfare – which is seemingly what Activision are desperately hoping for – you get a free map for your time, as well as double XP and a lot of other goodies too.

If you were feeling burned over the physical edition of Modern Warfare Remastered costing a pretty penny, consider this as Activision possibly trying to deflect all that emotion and get you ready to play again.