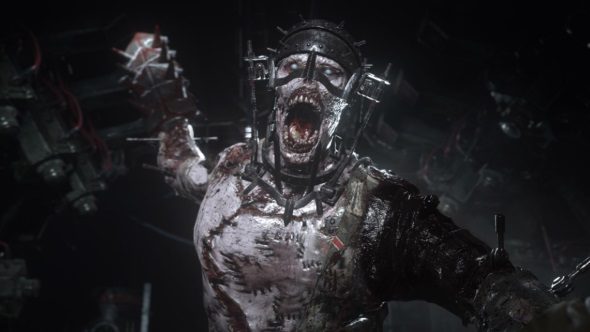 One of the stranger quirks of the Call of Duty franchise’s mega-success is the parallel rise of the zombie survival co-op playmode. Once a gimmicky little bonus where you defended a single building from waves of mindless undead, it’s become almost a parallel series, packed dense with its own lore, easter eggs and new gameplay mechanics.

It’s no surprise, then, that the series’ return to World War 2 also heralded a return to the roots of its undead-bothering side-story. An overrun town, four wisecracking heroes, a mad scientist with dreams of world domination. It was almost comforting, and it’s continuing again next month as part of the upcoming Resistance DLC bundle.

Personally, I’ve acquired a taste for disassembling robots in games over the past few years, but if you’re hankering to chop up some zombie meat, then we’ve got the list of your undead-hating dreams.

The new zombie adventure – The Darkest Shore – sees our fearless heroes continue their pursuit of the mustache-twirlingly evil mad scientist Doktor Straub to an island off the German shore. It seems that he’s been using this remote chunk of land as a storehouse for his undead hordes, and has brought in some (presumably not-zombie) reinforcements to protect them, as you’ll have to be dealing with some Stuka dive-bombers along with the usual selection of brain-eaters.

Personally, I’m of the opinion that both Call of Duty as a whole and the zombie stuff peaked with Black Ops 3, which offered not only a shockingly smart cyberpunk adventure for its main campaign, but two supernatural side-stories; one undead-filled remix of the original campaign thick with brooding narration, and a 1920s Lovecraft-inspired prequel story with tongue more firmly in cheek. Black Ops 3 on PC now comes bundled wtih the Zombies Chronicles expansion, a remastering of the combined zombie story arc following on from Black Ops 3’s Origins campaign.

The Darkest Shore (along with the usual bundle of four multiplayer maps) will be launching on January 30th as part of the Resistance DLC pack on PS4, with the PC version coming approximately a month later, so presumably around the end of February.