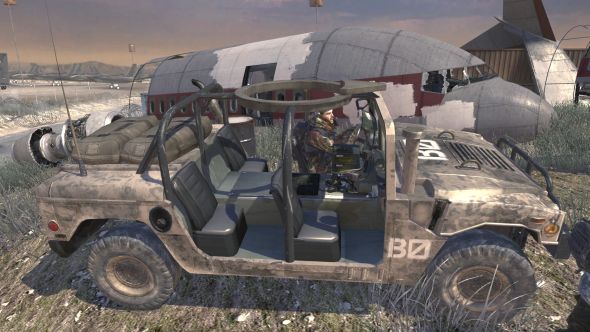 Activision are being sued for their use of Humvee military vehicles. Humvee maker AM General filed a lawsuit against the publisher yesterday.

Check out our Call of Duty: WW2 PC review.

The lawsuit claims that Activision Blizzard, who own the Call of Duty series, have unlawfully used the Humvee trademark throughout the series, as well as in related content such as toys and books.

The introduction of the 54-page lawsuit says Activision “have used and continue to use AM General’s trademarks and trade dress in advertising and promotion of their Call of Duty video game franchise.” That’s a fair assessmennt, as you don’t have to look far to see evidence of the vehicles, particularly in their Modern Warfare series.

But the complaint escalates from there – AM General claim Activision “have caused and continue to cause the manufacture and sale of collateral toys and books to further derive wrongful profits from AM General’s intellectual property.” It even goes on to suggest that the Call of Duty franchise, which has been running for more than a decade with a total revenue of more than $15 billion, “have been successful, but only at expense of AM General and consumers who are deceived into believing that AM General licenses the games or is somehow connected with or involved in the creation of the games.”

Both companies have been discussing the issue behind the scenes for a while, but those conversations have clearly come to nothing. A spokesperson for Activision Blizzard says the company does not comment on ongoing legal disputes.