When triple-A developers make historical shooters like Call of Duty: WWII, the research convoy mobilises. The team visit small French villages and take reconnaissance photos. They interview consultants at length about their experiences. They shoot period weaponry and record the sound of their shells hitting sand. They read letters written from the front to loved ones.

Funny coincidence, though: often, a set-piece in the finished game will bear an uncanny resemblance to a scene from a contemporary war film instead. Let’s explore this extraordinary and mystifying phenomenon through four glaring examples. 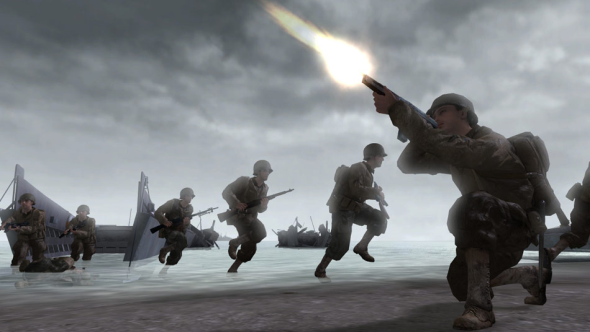 The storming of Normandy’s beaches constitute one of the most famous events of the 20th century – a symbol of the liberation that would eventually come to mainland Europe during World War II. Make no mistake: these events happened. But the way in which Call of Duty 2 chooses to frame one of D-Day’s battles, Pointe du Hoc, is familiar for another reason.

Lest we forget: the best World War 2 games on PC

In fact, this was not even the first time the team at Infinity Ward had tackled this particular set-piece. Previously, they had made Medal of Honor: Allied Assault, which placed us right on Omaha Beach, pressing up against the same Czech hedgehogs Spielberg opened his traumatic scene with.

Call of Duty / Enemy at the Gates 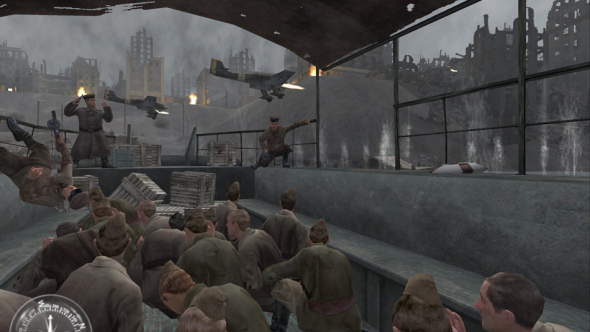 Have you seen 2001’s French-American take on the Battle of Stalingrad, Enemy at the Gates? Infinity Ward have.

Call of Duty 1 had us cross the Volga by boat, effectively inhabiting the body of Jude Law in the early moments of Jean-Jacques Annaud’s movie. In both scenes, a propagandist pep talk by megaphone is interrupted by the whistle of falling bombs and the boom of exploding ferries nearby. It is only once the planes start dive bombing that panic sets in, though, and a rush for the relative safety of the water begins, culminating in a sobering reminder of what Order No. 227 – ‘Not one step back’ – meant for deserters in 1942.

The gut punch comes back on dry land, where you pass down the line to receive not a rifle like the man in front, but a clip of ammo. “The man with the rifle shoots,” an officer explains. “The man without the rifle follows him.” In Enemy at the Gates, the wording is almost identical.

At the cinema, it was a powerful depiction of war in the USSR, where casualties numbered over 20 million. In a shooter, it was also a statement of intent: Call of Duty meant to make you feel vulnerable.

It proved so grimly effective that the series returned to Enemy at the Gates for inspiration in World at War. In their first ever COD, Treyarch mimicked the harrowing scene in which Law’s Vasily Zaytsev plays dead to avoid detection by Nazi troops. Zaytsev fights back from the cover of a ruined fountain – firing only when the boom of nearby bombs is sufficiently loud to mask his shots. 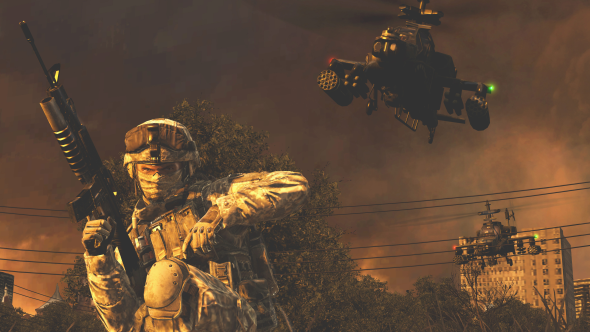 As the series has grown in age and popularity, Call of Duty has become marginally more subtle about its tributes to cinema. But Infinity Ward’s fondness for ‘80s and ‘90s war films has still been very much apparent, as veterans of the Modern Warfare trilogy might be able to tell you. In ‘Wolverines!’, the sixth mission of Modern Warfare 2, Russia launches a surprise invasion of the United States, and you are sent to defend the front yards and garages of quintessential American suburbia from foreign paratroopers.

The premise is highly reminiscent of Red Dawn, the 1984 alternative history flick directed by Apocalypse Now’s John Milius. There, the Soviet Union invade the US with the help of their Cuban and Nicaraguan allies, and the film follows the resistance of a group of high school students. The kids name their guerilla outfit after the school’s mascot, which happens to be – guess what? – a wolverine.

Infinity Ward /almost/ manage to let the reference land quietly. Until, that is, the achievement pops up afterward: ‘Red Dawn’. I think we got it, guys. You like Hollywood.

The latest Call of Duty marks the series’ return to historical shooting after a decade -long break – which means, once again, that Saving Private Ryan is prime fodder. If the studio name Sledgehammer does not inspire confidence on the matter of movie-sampling subtlety, I am not sure what would.

It really is ‘blink and you’ll miss it’, but eagle-eyed players might notice this nod to Spielberg’s infamous scene as they stumble through WWII’s unflinching recreation of the Normandy beach social space.

Here is the original scene from the movie:

A loot box falls from the sky, just as it did in the 1998 flick, and crashes onto the sand. Then, as shellshocked troops begin to recover, they witness the chest pop open, and three authentically-realised upgrade cards spring magically into the air. The trademark mise-en-scene of Spielberg is unmistakable – as is the respect and sensitivity of Sledgehammer for the history that came before them.