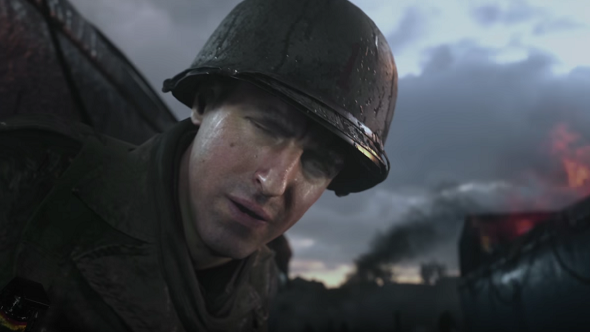 Activision really want you to know that COD: WW2 puts players’ boots back on the ground. Throughout the game’s reveal livestream, the phrase “boots on the ground” was said so much that it barely even means anything to me anymore. Soldiers didn’t wall-run in WW2. We get it.

For more historical conflicts in videogame form, check our list of the best WW2 games.

COD: WW2 will take players across the European theatre, featuring the Normandy landings and other famous battles from across the conflict. France, Belgium, and Germany have all been confirmed.

The story will be about brotherhood, following the 1st Infantry Division as they struggle between skirmishes. Developers Sledgehammer say they want players to have an emotional reaction, presumably before having a different kind of emotional reaction in online multiplayer or in the confirmed co-op Zombies mode.

“More than two and a-half years ago we made the decision to return this franchise to its roots, and Call of Duty: WW2 does so in epic fashion,” said Eric Hirshberg, Activision CEO. “The team at Sledgehammer Games is delivering an authentic, gritty, cinematic experience that honours both the epic scale, and the human struggle of the greatest war the world has ever known. This game will let longtime fans experience WW2 like never before, and will introduce this historic conflict to a whole new generation of gamers in the process.”

During the livestream reveal, Activision got four of the game’s actors on stage where they spoke about their characters and the game’s diverse personalities. All of the actors were white dudes, but Activision promise a “cast of global and diverse characters”, so perhaps we’ll see a little more human variety in the actual game.

Over in multiplayer, Divisions are this COD’s take on create-a-class, letting players enlist in specific units. There’s also War, a new narrative-backed game mode – the full reveal of that is coming at a later date. Last up, there’s Headquarters, a fresh social hub where players can meet up and show off their character – presumably this means there will be cosmetics to unlock, and therefore loot boxes of some kind.