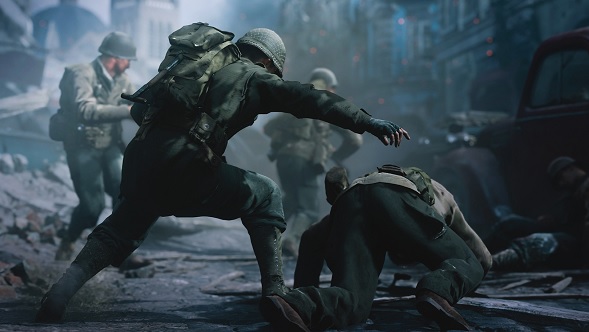 Call of Duty: WWII’s early sales suggested it was on the way to being one the series’ biggest sellers in quite some time, and that success has continued through the end of the year. In fact, it’s been so strong that WWII managed to end 2017 still on top of the UK sales charts.

Find out why we think Call of Duty: WWII is one of the best games of 2017.

That’s according to GfK Chart-Track, who recently published UK game sales for the last week of 2017, showing a continued #1 spot for the latest Call of Duty. Here are the top 10 sellers:

This is a chart of retail sales, so it’s predominantly weighted toward console games. But checking stats on SteamSpy paints a similarly impressive picture. Call of Duty: WWII has over 800,000 owners just two months after release, compared with Infinite Warfare’s 500,000 owners a year later. There’s still plenty of room for WWII to grow compared to the franchise’s biggest games, however, with owners of the early Black Ops games pushing past 3 million, and Modern Warfare 2 over 5 million.

GfK Chart-Track, a UK statistics group tracking physical sales, have announcedthat week one sales of WWII are 57% higher in units and 21% higher in revenue than the equivalent a year ago. This displaces Assassin’s Creed Origins at the top of the UK top ten, with FIFA 18 at number three.

On ResetEra, Kenzodielocke gives a little context, with launch numbers for all other titles in the series back to Modern Warfare. Infinite Warfare moved around 328,000 units – a 57% increase on that would put WW2 at roughly 515,000. If you ignore Infinite Warfare, that’s still lower than any COD since World at War, but digital sales – not captured by GfK – are much higher as a proportion of the total now.

Plenty of caveats to apply to these figures, then, but the early news is positive for Activision.