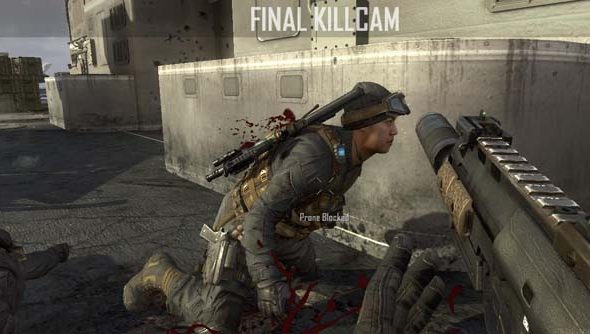 Xbox Live players have been inhaling the meaty delights of ham camo for two weeks now thanks to new Black Ops 2 ‘micro items’ – optional purchases that variously yield themed calling cards, extra create-a-class slots and some very silly aesthetic weapon upgrades. In another two, we’ll be able to join them.

An in-game store will feature nine themed packs at launch, currently found on Xbox for 160 Microsoft points / about £1.36 each. Every Personalisation Pack will include a calling card, three uniquely-shaped reticles, and a new weapon skin. One will plaster your chosen weapon in “the most delicious cured meat known to man”.

Elsewhere, an Extra Slots Pack (160 MS points) offers players another 10 create-a-class slots beyond the usual 10 allowed at Prestige Master rank, and increases media storage capacity – though screenshot space is hardly an issue on our fair platform. Flags of the World Packs (80 MS points), meanwhile, bring together the calling cards of your favourite continent or arbitrarily-grouped geographical region.

Perhaps more pertinently for the majority, the formerly pre-order only Nuketown 2025 will be unlocked for all come April, and Nuketown Zombies will be available for purchase for the equivalent of 400 MS points.

Whatever your pleasure, be prepared for “PLEASED TO MEAT YOU,” to become the trash talk of choice in the very near future. Are you happy to see Black Ops 2 get a Rise-of-the-Triad-style tonal downgrade?