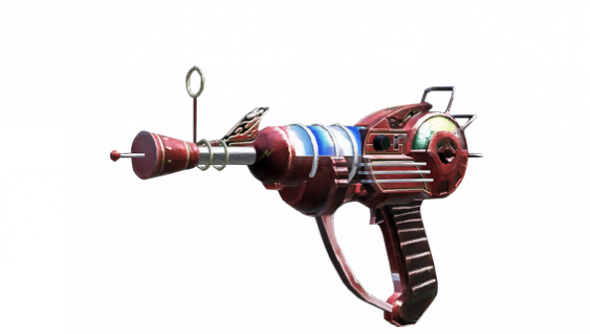 Black Ops 2’s upcoming Vengeance map pack is many things: a tonic to the game’s tired map rotation, an enabler for frontier-meets-undead fantasies, and the vehicle to return the Ray Gun, implausible firearm and veteran of two other Call of Dutys. It’s at least a month away on PC.

However! Unwilling to be sidelined by the lure of the Old West, the Ray Gun took advantage of yesterday’s console patch to take players for a quick spin around the existing zombie maps. It was promptly pinned down by Treyarch and packed back into its box, but not before everyone and their SCAR-H-toting mums got a good look at it.

Take your pick of the two fast-talking YouTube demonstrations below:

The new Ray Gun appears to be an automatic weapon that emits globules of plasma, reducing zombies to dust in a couple of shots.

“This is an evolution of the fan favourite,” said the developers in a DLC trailer the other day. “It is a true laser gun. It is going to go through entire trains of zombies.”

A train of zombies? Is that the correct collective noun?