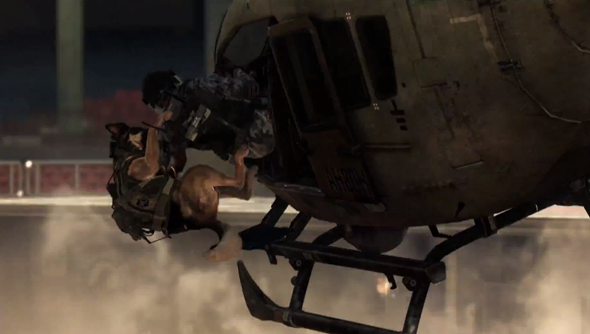 Each Call of Duty has to outdo the previous outing’s singleplayer campaign in terms of bombast. So it is writ, so it is done. If the latest campaign trailer from Infinity Ward is anything to go by then Call of Duty: Ghosts has done just that. Though, with its shootout in space and dog attacking a helicopter antics it may have moved quite deeply into the realm of the preposterous.

Still, you never played the singleplayer for realism did you?

What we can glean from the trailer is that in the (near and totally believable) future America will have surrounded itself in space with giant laser satellites. This foolproof defence method is taken over and used against its makers, and there’s nothing the legion of space suit-wearing soldiers can do about it. America now in ruins and defenceless is invaded from the south by some meanies. All that stands between America and this cabal of foreigners is you, a man with a balaclava, a gun, and a dog.

Oh, and your dad was a soldier once, too. That seems to be important somehow. I’m sure it will be a touching relationship where the son realises his dad is proud of him and loves him very much despite all those birthdays dad missed because he was out protecting patriotism.

You’ll be able to dive into this gripping tale from 5 November.