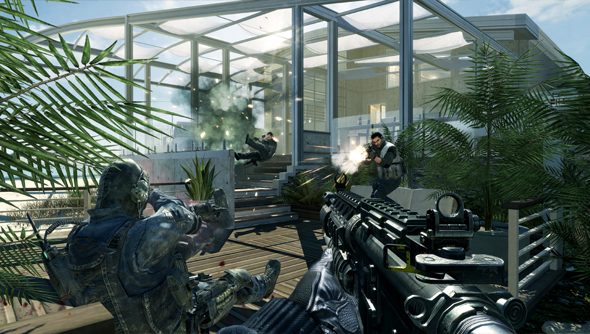 Even though they were set up as rivals, both by marketing and the press, Call of Duty: Modern Warfare 3 and Battlefield 3 couldn’t have been more different while still occupying the same genre. Where Battlefield was wide open spaces that lent itself to moments of drama and action amid a sea of tension, Modern Warfare 3 was always about the moment to moment, frantic gunfights of close quarters. Collection 2, the second major DLC for MW3, understands this at its core, and presents you with a way to get up close and personal with the minimum of fuss. Building on the success of MW3’s freely released Face Off maps, Collection 2 comes with an additional pair. Getaway, taking place among the sprawl of a beach-side villa, is resplendent with open plan kitchen, swimming pool and aquarium. And while the glass of the latter cannot be shattered, and the fish cannot flounder amongst their puddling supply of oxygen, the up-market surroundings elevate what is already an interesting map into somewhere you might rather spend a few weeks reclining rather than riddling it with bullet holes.

But that’s what you’re there to do, and do it you must. The Face Off mode pits two, four, or six players against one another in teams, focusing far more on blindingly fast respawns and constant action rather than the more organic lull and rise of the average CoD game. It’s not as though you even have a moment to consider whether this feels artificial or not, as you are constantly in the action, and constantly killing or being killed. The random respawns work against the game to an extent, in such close quarters, as getting shot in the back becomes far more common when there is only a hundred square feet or so to spawn into. It’s also coming with a compliment of two Spec Ops missions, focusing on the asymmetry of two roles, with the first, Dead Sight placing one player in a sniper nest covering the other as they move towards an enemy stronghold with eyes on triggering an EMP. It’s tense, and forces cooperation and communication almost immediately with both Riot Shielded enemies and Juggernaughts, who would decimate a single player, but with teamwork you can constantly juggle the aggro between one another. There’s even a Reaper Drone section thrown in, because everyone loves explosions. The second is a little more of a power fantasy. Iron Clad puts one player in a tank, and the other providing infantry support. As the Tank progresses, suicide bombers and tank traps impede its progress, necessitating the guy on the ground to deal with the majority. There are also intermittent enemy armour and helicopters, which the main tank cannon makes short work of. The idea is to struggle not to get overwhelmed, but as it was the major threat was running over your teammate due to an inability to look down sufficiently from the tank commander’s position. Which, granted, is understandable enough. You do have a few tonnes of armour between you and the ground. Unfortunately the part of the DLC most will care about was illest suited to three against three. Of the trio of new multiplayer maps, only Sanctuary, a sprawling Eastern European Monastery town, was available to play, and the winding streets and wide open bridges made it simultaneously a haven for snipers and the bane for anyone who didn’t know its geography in and out. Played in a full game, it feels like it would come alive, and all of those tight quarters would work in its favour rather than making it just frustrating to navigate. Instead of getting lost you’d just get dead, or help someone else on their way. You don’t need to care about your bearings when you’ve got death around every corner. Collection 2 is shaping up to be one of the most comprehensive DLCs that the Call of Duty series has been graced with to date, equalling half of Modern Warfare 2’s output in a single blow. The contents themselves are accomplished and confident, and more importantly provide something for everyone. Even the Spec Ops missions can be played single player, meaning even those left cold by CoD’s extensive MP offering have something to enjoy.