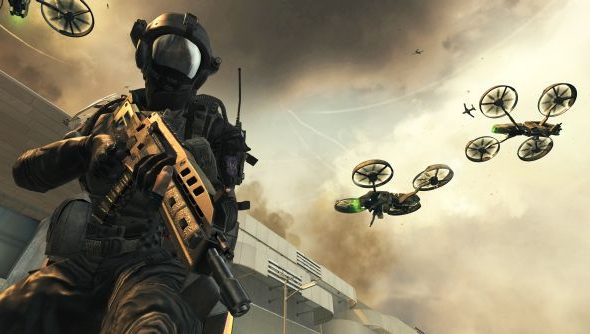 Call of Duty: Black Ops 2 marks the franchise’s first venture into the future of warfare, complete with an entirely new approach to playing the game. We’ve rummaged through the interwebs and contacted our deep-throated sources for information and compiled it all in this handy guide. Read on for everything we know about Black Ops 2.

Written by The Dark Knight and Blade scribe David S Goyer, Black Ops 2’s story is set in 2025. Unmanned aerial vehicles, armoured robots and satellites are at the frontline of modern warfare. Rare earth minerals are the new oil. Naughty person Raul Menendez has somehow infiltrated the US’s own defences, and is using them to attack home turf and start a war between the US and China.

If it’s set in the future, why are there horses? Surely everyone will have electrohorses by then?

Black Ops 2 will switch back and forth between 2025 and the original’s setting of the 1980s. The 80s action will foreshadow the near-future levels, explaining why Menendez is so angry and how the war started.

Where is it set?

We know for certain that LA and Yemen will feature in the game, with the former providing the backdrop for some dystopic urban warfare. The folks over at G4TV transcribed dates and co-ordinates from the trailer, and came up with the following places and dates:

Will anyone from Black Ops return?

In the 1980s sections the player protagonist will be Alex Mason, and the whole thing’s narrated by the original’s presumed-dead badass Sergeant Frank Woods. Alex Mason’s son, David, is the player character in the near-future bits.

Who will be talking as the character’s lips move?

James C Burns is the only confirmed voice actor at the moment, returning to lend his vocal chords to Frank Woods. The presence of Alex Mason suggests that Sam Worthington is likely to return, but we don’t know who’ll be voicing his son. The mysterious Viktor Reznov also appears, making another trip for Gary Oldman to the recording booth a likelihood.

Who will I be shooting?

It’s unknown at the moment – a Youtube videoenigmatically suggests that “The enemy could be anywhere, and it could be anyone”. Thanks for that. We’d guess at Chinese forces, as well as good ol’ non-nation-specific terrorists. The retro sequences will take place in the real-life proxy wars of the Cold War, where other countries fought over US and Soviet ideologies.

Can I shoot at least one zombie?

Yes! You can shoot many zombies. The official Facebook page hosts an image of a woman (A woman!? In a manshoot!?) holding a zombie skull. Treyarch studio head Mark Lamia told One of Swords, “If you like zombies, you’re going to be really happy with what we’re doing with Black Ops 2. It’s our biggest, most ambitious zombies effort ever”. In a separate interview with Official PlayStation Magazine, Lamia also said that there would be twice as many zombies as before, and twice as many co-op players. That’s right, eight players!

With what shall I be shooting them?

People who know an impressive amountabout this kind of thing over on Call of Duty’s community site spent hoursporing over the trailer. They came up with the following list of real-world and sci-fi weaponry:

As well as more traditional lead-projectors, Black Ops 2 will feature state-of-the-art near-future unmanned drones and vehicles. It’s unknown as to whether or not these will be available in the zombie or multiplayer modes, but they’re a big part of the single player game. We also don’t know if an unmanned vehicle can become a zombie unmanned vehicle.

What is this non-linear gameplay thing?

Black Ops isn’t just the Call of Duty franchise’s first venture into the future – it’s also the first time it’s experimenting with branching, multiple story lines. These are known as “Strike Force missions”, accessible during the single-player campaign, and each one will impact on how the story plays out. You won’t be able to play all of them in one sitting, and if you die during one the game will carry on to the next mission.
The Strike Force missions will also alter the way you play the game. Rather than sticking to the FPS perspective, you’ll switch to an RTS top-down perspective. From here, you’ll be able to dip in and out of other characters, aerial attack drones and quadrupedal robo-tanks known as CLAWS. “These are great levels, because you’re going to be able to go back and play them, you can play them on different difficulty levels,” Mark Lamia told The Verge“If you’re playing the campaign, and you’re moving through, you can go back later to play the other levels to try them out.”

The multiplayer levels are going to be set entirely in 2025. Two levels have been glimpsed so far: a village in Yemen, and a ruined version of downtown LA, also known as “just downtown LA”. Create-a-class and killstreaks will be reigned in, with Treyarch aiming to make the multiplayer feel more intimate. They also want the experience to be more tailored for E-Sports.

Black Ops and World at War developers Treyarch are behind the new title, and it’s running on the same IW 3.0 engine that powered Black Ops and, um, Quantum of Solace.