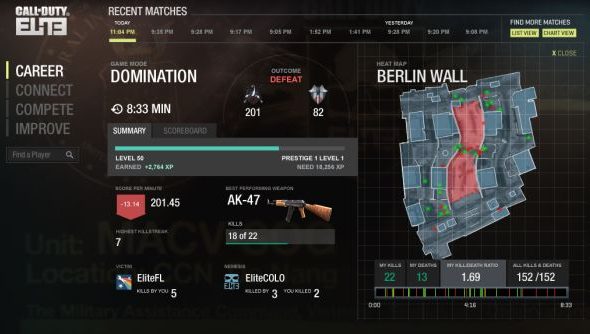 Console gamers have had access to Call of Duty’s feature-packed Elite service for the past few months, and Activision are continually promising its arrival on the PC. But how will a premium, paid-for service ever work with the notoriously fickle PC gaming community?

Call of Duty: Elite was launched last year alongside Call of Duty: Modern Warfare 3 on the Xbox 360 and PlayStation 3. It’s a service that allows access to exclusive maps, content and statistics for the multiplayer campaign of Call of Duties Modern Warfare 3 and Black Ops. So far, it’s attracted seven million members, 1.5 million of whom pay for a premium membership.
Elite comes in two tiers: free and premium. Free includes stats, performance analysation, load out customisation, clan management and access to Elite via web browsers, mobile phones and consoles. The premium offering costs $49.99 (£31) a year and includes all downloadable content, a daily competitive program guide, early access to new features, exclusive videos and clan benefits.
Despite Activision’s announcement of the project for the PC, it completely failed to materialise when Modern Warfare 3 was released. Elite developers Beachhead cited the PC’s vulnerabilities as a platform for its lack of presence.
“The issue here is that the PC is an insecure platform,” Beachhead’s studio head Chacko Sonny told One of Swords [http://oneofswords.com/2011/10/call-of-duty-elite-october-2011-update/] last year. “Without a central, trusted resource for stats, a lot of our competition features become unfair. We can’t give away prizes when people can easily cheat their stats. Leaderboards are less fun when a lot of the users are there unfairly.”
With the announcement of Black Ops 2, interest in a PC version of Elite has been piqued again – but there’s no clear answer as to whether or not we’ll ever receive the service. In an interview with PC Gamer [http://www.pcgamer.com/2012/05/02/hard-questions-black-ops-2-multiplayer-cheats-dedicated-servers-lan-support/], developers Treyarch’s studio head Mark Lamia said: “We haven’t announced exactly what we’re doing with Elite for the next game. It’s more of an Elite question that’s going to be answered for people later.”
The official Elite FAQ [http://www.callofduty.com/elite/toolbar/faq] casts about as much light on the issue as a failing Maglite on the dark side of the moon. “There is not currently a Call of Duty ELITE offering on the PC,” it says. “But we will continue to update the community with more information in 2012. We are working hard to provide our PC fans the best Call of Duty experience they have had to date.”
Elite’s had problems since day one. When it launched, gamers found that they couldn’t even log in to the service. There’s also the issue that Activision is making gamers pay a premium on top of something they already own. This is partially justified by access to unlimited multiplayer map packs, which generally cost $15 each, but it still seems a little cheeky.
Where the waters get muddied is with the PC version of Elite. $50 for all you can eat DLC may sound like a great deal, but as soon as a Steam sale comes around you’ll probably start crying. As for things like clans and stats, they’ve been a part of PC gaming since the Xbox was little more than a figment of Bill Gates’ imagination.
If Elite does actually arrive on the PC, it’s going to have to be a very different beast to the one currently nesting on consoles. We can’t imagine any PC gamers wanting to splash out $50 a year on something other games – especially CoD’s competitors – already offer for free. We’ve grown used to an increasing number of MMOs and FPSs becoming free-to-play, too, so any kind of additional annual charge is likely to be laughed at. Hard.
Our best guess is that Elite won’t come to the PC at all. Instead, its features will be seamlessly and invisibly integrated into Black Ops 2, and possibly retrofitted into Black Ops and Modern Warfare 3. Rather than buying an Elite subscription, PC gamers will be able to spend a bit of dosh on an unlimited map pack, akin to Rockstar’s Pass for LA Noire and Max Payne 3.