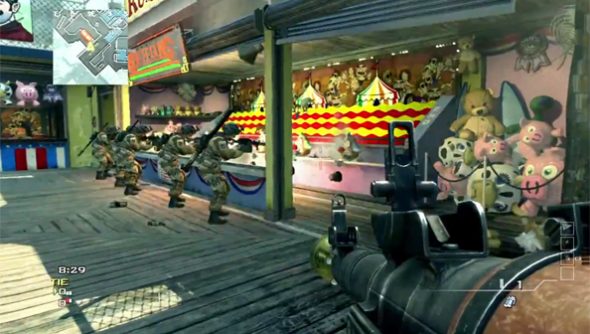 We’ve known about Final Assault’s five new maps for some time, but until now to imagine them we’ve had to rely on brief developer descriptions, artists’ impressions, or completely fabricated personal headscapes based on their five titles – ‘Gulch’, ‘Boardwalk’, ‘Parish’, ‘Off Shore’ and ‘Decommission’. I don’t know about you, but in my head Gulch looks absolutely disgusting. Thankfully, there are five screenshots and a trailer below the jump. ‘Off Shore’ isn’t exactly thematically new ground for Modern Warfare, but intriguingly necessitates manoeuvring between not one but three oil rigs, via precarious scaffolding bridges. ‘Gulch’ isn’t half as slimy as I expected, playing out in an abandoned mining town amid TF2-hued rocky outcrops. ‘Boardwalk’ – to which the mental freeze frame above belongs – looks like a near-future Blackpool. This final MW3 content pack is due early September on Xbox, but all’s frustratingly quiet for PC thus far. You can see all five maps traversed in motion below:-