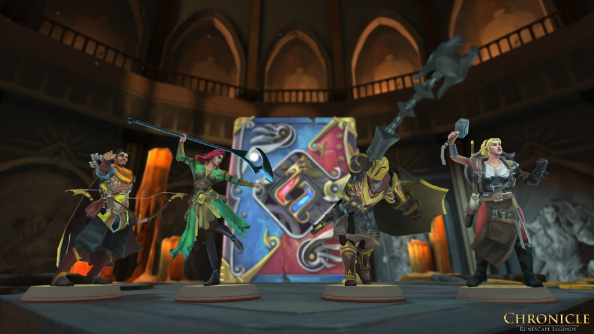 Chronicle: Runescape Legends has an image problem – it’s an online card game set in the universe of a popular and long-running MMO. As such it’s bound to draw parallels with Blizzard’s own behemoth deck-builder, Hearthstone – a game it actually has very little in common with.

Looking for games like Hearthstone? We’ve got your back

It’s a shame Chronicle will draw those assumptions, because it’s actually a clever subversion of the traditional card game. Don’t take my word for it, though – you can play the game right now on Steam. 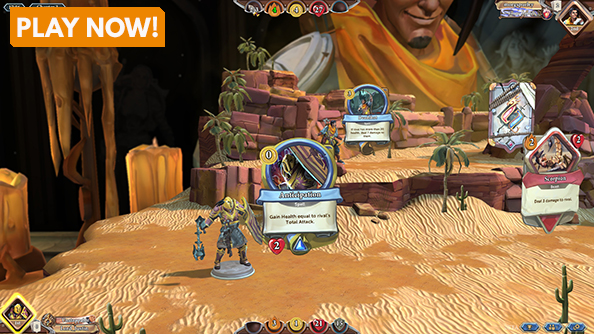 Subversive how? Rather than playing cards against your opponent, you lay them for your own character, or Legend, to face. I know: try to gather up your recently exploded grey matter though, there’s more to cover.

The grand concept of Chronicle is that Legends from the Runescape universe are duelling each other via a magical storybook on which each match takes place. It’s cosy like a fire lit log cabin full of St Bernards, each one carrying a more luxurious brandy on its collar than the next. Characters all have the appearance of tabletop models, and their animations are endearingly evocative of an unseen hand picking them up and bashing them into each other.

In fact, the game started as a physical prototype. Its developers built actual decks and played around with the rules for a long time before arriving on the 3D, storybook concept. This also lends itself easily to VR implementation, too – there’s already an Oculus build up and running. It’s currently wrestling some UI challenges, but there’s obvious potential in a VR game that doesn’t feel compelled to take you on a rollercoaster ride of some sort. 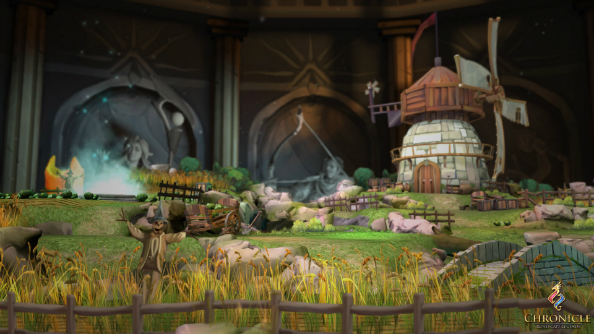 Each match takes place over a maximum of five ‘chapters,’ set in iconic Runescape landscapes, during which each player has the opportunity to play up to four cards, as I mentioned, on their own Legend.

Rather than chipping away at your opponent’s stats, you’re instead trying to buff your own: health, damage, weapon damage, armour, and gold. Play a monster card for your own Legend to face and you might lose some health as the two battle, but gain damage, gold, or both. That increased damage will allow you to slay the next monster without taking a health hit. Or the gold might let you play an expensive card next round that deals damage to your opponent equal to one of your stats. 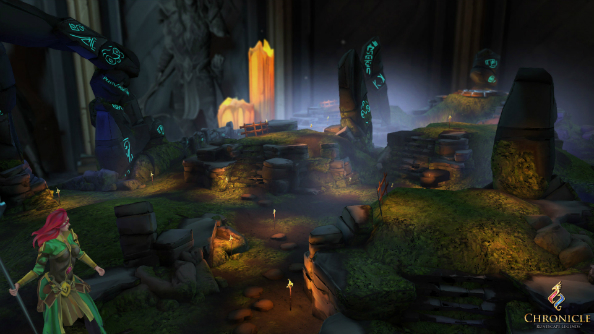 Yeah, you can totally mess with your opposite number’s cards. You might have carefully calculated that you’ll just about have enough health to take down that monster in three cards time by gaining health from the preceding cards, and will thus earn a massive damage boost heading into the final chapter.

However – and this is particularly likely if the other player is using Ariane the mage – your opponent might have played a card that buffed the damage or health of one of your enemies, and just like that you’re out of health – cooked. The risk/reward is strong with this one.

Once you get your head around the different card types – enemies, allies, modifiers and utility cards that might, for example, let you take a health hit and redraw two more – your attention soon turns to laying them down in a sequence that will lead to a combo.

Manage your temporary and permanent buffs well enough, and you’ll head into the final chapter’s Legend-on-Legend duel with a massive advantage and take apart your foe in a couple of hits. Anticipate the flow of the game incorrectly, and you’ll be lucky to even make it as far as that duel. 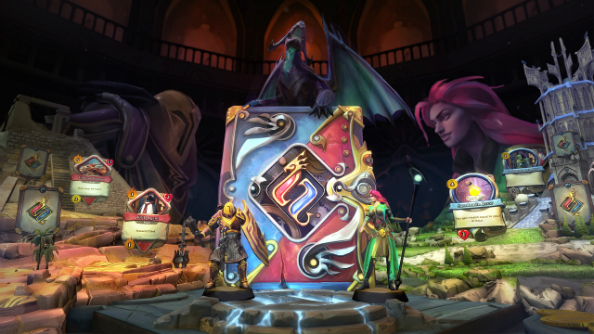 It’s the wildly opposing strategies playing out at once that makes Chronicle such an interesting set of rules and variables. The Raptor, for example, is all about building up armour and damage, and his cards are tailored as such. Ariane’s magical abilities let you constantly mess with the other player, however. Ozan’s cards are geared towards accruing – and outright stealing – gold. Linza the blacksmith might be the most interesting, and most challenging – her success depends on building up weapon damage, which requires expert timing, but is incredibly satisfying to pull off.

There’s a lot to Chronicle I haven’t sampled yet – the deck-building metagame, the offline ‘Gauntlet’ mode, and many new cards and Legends who haven’t made it into the pre-release version yet. However, I’ve seen the gang of instant hardcore players who took root in the Chronicle room at the last Runefest, and I’ve played enough to see the long-game appeal.