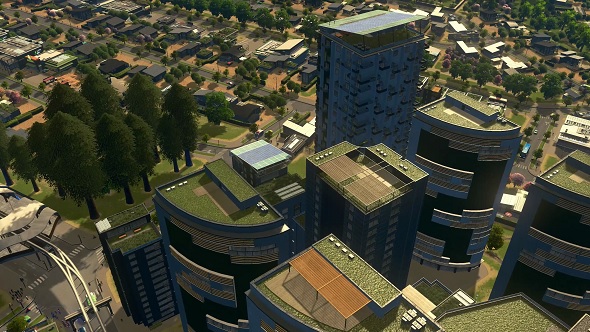 Last week, Cities: Skylines’ makers Colossal Order revealed the game’s next expansion would be focused on clean living, giving you the tools to turn your cities green. We’ve spoken to the developers and played the Green Cities expansion to find out exactly what’s coming – from floating restaurants to tools that end the perpetual problem of poop.

The expansion brings with it hundreds of new building designs, giving a much greater variety to your city. This is most evident in the three new zones. Place the new eco-friendly residential zones and you’ll see stylish houses fitted with glistening solar panels pop up in the suburbs, shimmering in the sun as you slide the camera around your city. Make your high-rise homes green and you’ll see tower blocks outfitted with vertical farms, adding a fetching stroke of colour to walls that are otherwise overwhelmingly grey.

The new residential areas have the benefit of using significantly less energy than traditional homes, as they generate much of their own. The downside of all that tree hugging is that your tax revenues will take a hit – the residents just don’t need to buy your coal-fired electricity any more. 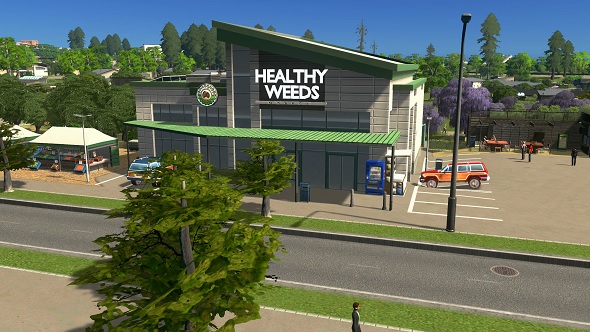 The new eco-friendly commercial zones will see shops selling soy and local produce pop up in your city, too. Again, this will have a dual effect. Because the goods are locally sourced, they require less shipping and reduce the number of trucks travelling your streets, reducing air and noise pollution and congestion. However, the food is more expensive, so it won’t be to everyone’s tastes.

The final new zone is the IT cluster; a new kind of office district. The buildings are high-tech constructions of the future that run on half the usual number of staff. Considering offices only hire highly-educated employees – a commodity that can often be in short supply – and produce a lot of cash, this low-staff building can see your city bring in a lot of money. The downside is that the buildings draw a lot of power to function, putting a drain on your resources. Thank goodness you can make all your residential zones produce much of their own.

Electric cars for all

As with its other expansions, Colossal Order are releasing a free update in tandem with the expansion that adds new features to the vanilla game. The big new thing in this instance is electric cars. These quiet, clean-fuel machines will start appearing all over the city. Again, it’s not just an aesthetic change, it’s the mark of a redesign of how Cities handles noise pollution. Originally, the scale of a road and its congestion level determined how much noise pollution was created, with Green Cities and the free update, the game will determine sound levels from the size and type of each car on the road. So, if you have more electric cars on the roads, even if they’re clogging up the city, they will be producing less noise than the combustion engine equivalent.

You can enforce ecology with an iron fist 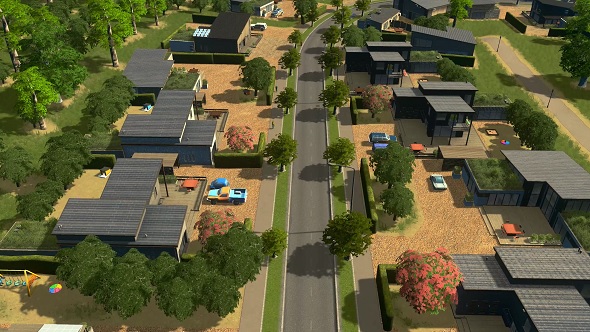 If you really want to drive the ecology home, there are new policies being added to the game that will let you force a district to behave greenly. One forces all residents in an area to switch to electric cars and another lets you ban combustion engine vehicles from commercial and office districts. Both policies will do wonders for your citizens’ health, but, again, tax revenues will take a hit.

Outside of the new buildings in zones – which you don’t have much control over as they’re built and expanded by your citizens and not you directly – are a slew of special buildings for you to sprinkle over the city. Among them are wellness buildings like gyms and yoga centres. Placing those makes your populace happier, but it also makes them healthier and reduces their need for medical facilities. And there are new parks and monuments – like the Ziggurat, a building the size and shape of an Aztec pyramid, completely overgrown with luscious plant life. The new recycling centre does a much better job than the traditional landfill to collect your city’s rubbish, leaving much less of a pollution footprint. There are also new floating buildings, ranging from rubbish collectors to lovely little restaurants.

Since it was first revealed at Gamescom back in 2014, Cities Skylines has had a constant companion: poop. As your city grows so, too, does its effluent. Your people can make great rivers run brown, staining them all the way out to sea, like a kind of chunky oil spill. 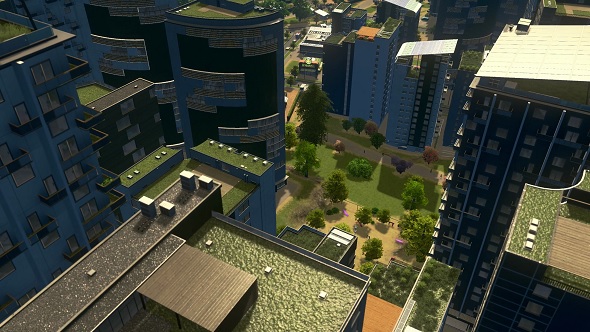 Now, after three years of living with this blemish, Colossal order is giving players the tools to wipe away the pollution their populace produces. Cities: Skylines – Green Cities will fill your toolbox with new districts, policies, service buildings, and, most importantly, a waste treatment facility that you have run off into rivers instead of a sewer outlet. Not a drop of dirty water runs from the facility into the sea.

The effect of the new service is immediate: as soon as you place the building, a patch of clean water will appear in the mulch and begin to flow out, pushing out the brown.

As you might expect, the building doesn’t come cheap, and maintaining it costs a pretty penny, too. So unless you have deep pockets, you may need to plump for the cheaper option – a filtered outlet pipe. It’s a step up from the starter pipe but it doesn’t catch all the mess that is making its way to the ocean. Oh crap.