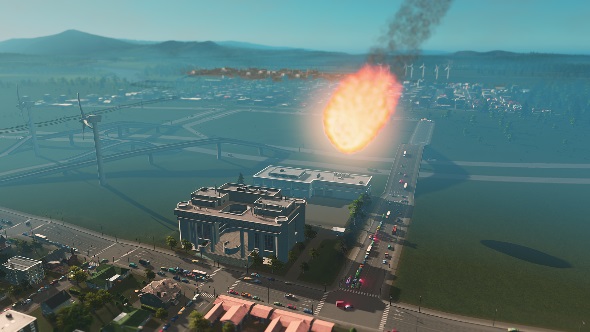 As Armageddon taught us, if you close your eyes or fall asleep, you’re likely to miss a thing. And that’s true of Cities: Skyline’s next expansion, where the ‘thing’ in question is a bloody big meteor that will turn your city to dust.

Looking for other kinds of freeform gaming? Try one of the greatest PC sandbox games.

Cities: Skylines – Natural Disasters tells you almost everything you need to know in the title, but we’ll handily explain here the things you won’t able to infer. So, aside from the key back-of-the-box features of Death, Destruction, and Despair, the expansion will also add:

“Cities: Skylines – Natural Disasters is all about destroying your city,” says Mariina Hallikainen, CEO of Colossal Order. “After you’ve been building it for so long and taking care of it, it’s kinda nice to just call upon a meteor strike.”

A city disaster is split into three phases: preparation, disaster, and aftermath.

“It’s going to bring a lot more to the game,” says Hallikainen. “You’re gonna have to be preparing for possible disasters, then seeing the destruction happening, and then figuring out how you rebuild your city from that.”

Hallikainen only talks in vague terms about preparing for disasters, but it’s clear that this will likely revolve around making sure that specialised city services are present, and logically thinking about the design of your city. Do you really want to cluster together vital constructions when they could be wiped out in a single, swift strike?

There will also be a warning system in place that will alert you ahead of time, allowing you to put your city in the brace position before the inevitable crash. 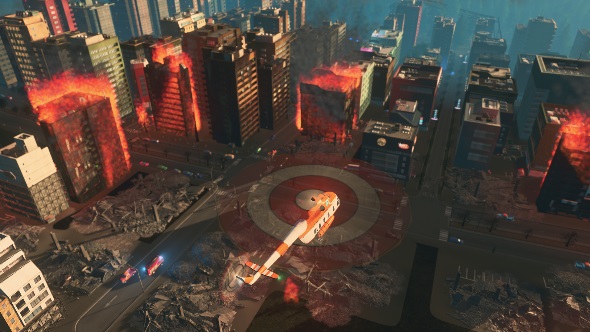 With your city prepared, next comes the disaster itself. Colossal Order have only shown off a single event so far – the fiery and cataclysmic meteor strike – but the expansion seems to promise a variety of emergencies that each come with unique, spectacular destruction. Meteors will crash through skyscrapers and blast holes in the terrain, leaving wreckage, ruined roads, and blazes tearing through the neighbourhood. It’s an event that’s exciting to behold, but no doubt stressful to respond to, especially if your preparation was lacking.

With the city in chaos, it’s now time to respond. “There’s a special new city service called the Disaster Response Unit, and these guys are there to make sure that the survivors in the rubble are saved,” details Hallikainen. “So we may have some people stuck in or under collapsed buildings, and if they are still alive they need getting to a hospital. So you’ll have to clear all these collapsed buildings before you can rebuild.”

The Disaster Response Unit will be able to act in a different manner to other emergency groups we’ve seen before. “We’ve added quite a few things for the city services, so for example helicopters will be helping out areas that have no road access anymore,” Hallikainen explains.

With the fires put out, survivors saved, and rubble bulldozed away, you’ll then be able to begin recovering. Road networks can be reconnected, craters re-turfed, and buildings replaced. And then it’s back to city management as usual. At least until the next natural disaster. 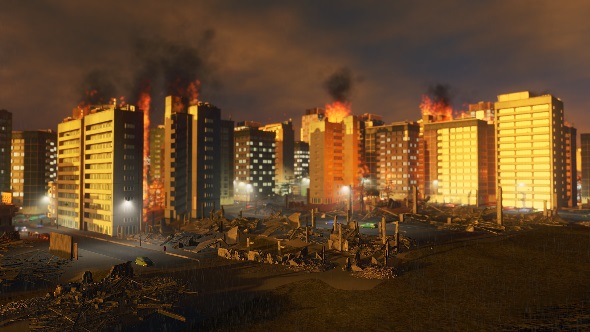 Natural Disasters isn’t the only thing Colossal Order will be adding to Cities: Skylines. As with other Paradox-published games, Cities is receiving a huge patch that will add free new features for existing players. The focus of it is the scenario editor, which places an interesting new tool in players’ hands.

“The editor is about setting the winning and losing conditions, and what you can do with the expansion pack is set the times for disasters to make a crazy scenario,” she explains.

The editor consists of a variety of drop-down menus that allow you to tailor a scenario with various win states in the vein of reach a certain size, or lose when your city is bankrupt. There are also more granular levels of rules, such as dictating how much area of a city can be dedicated to industry. It’s the kind of system that seems to promise challenging scenarios that task players with creating successful cities without relying on typical methods of growth. 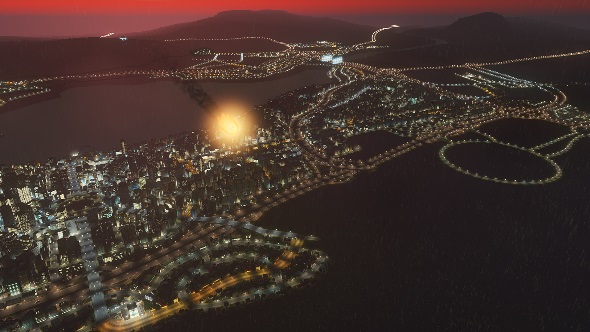 For those playing scenarios with the Natural Disasters expansion pack installed, the scenario editor will include menus to add catastrophic events. You’ll be able to decide on the scale of a meteor strike, how many meteors land, and with what frequency.

“We’re really hoping that a lot of people will be making their own scenarios and sharing those. It’s going to be very exciting to see how it’s used!” enthuses Hallikanen.

Cities: Skylines – Natural Disasters will be available winter 2016, so now is the perfect time to start researching disaster-proof city designs.