Created by Colossal Order, a Finnish studio initially employing only nine people, Cities:Skylines development started with one simple goal: to create a fun, modern take on the classic city builder. As it turned out, they weren’t the only ones pining for a return to the genre, as in just over a year and half Cities Skylines has managed to sell a jaw dropping two million units.“The reaction was crazy!” gushes Colossal Order’s CEO, Mariina Hallikainen. “It was really overwhelming – just everything that a game developer could hope to achieve with their game.”

Yet things weren’t always looking quite so peachy. Mere months after starting development, this small studio from Finland found themselves going head to head with the very series that inspired them: Sim City. “When they announced [Sim City 2013] we thought, ‘Well, that’s it – there’s going to be no room for competition,’” admits Mariina with a shrug.“We were sure that they would hold their throne.”

Luckily for Colossal Order though, EA turned out to be their own worst enemy. Demanding that players play online at all times, a wave of server problems at launch saw thousands of angry players unable to even login to Sim City 2013. Worse still, many of the players that did manage to get in and start building soon found their cloud save data had been completely wiped from the server. With public outcry and terrible reviews flooding the internet, EA refused to refund players, desperately, but ultimately unsuccessfully, attempting to patch the game back to health. 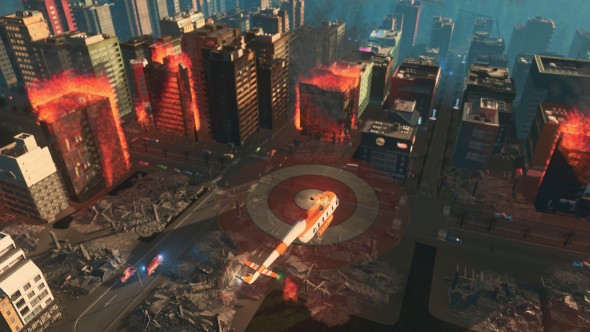 After the failure of Sim City 2013, there was a sizeable building-sim shaped gap in the market that Colossal Order were all too happy to fill. “We were very fortunate there,” reflects Hallikainen. “I have to say it did play a factor in our success.” Yet while their success was partly down to being in the right place at the right time, Colossal Order ultimately succeeded because they chose to embrace their community. Making their game work entirely offline and opening it up to modders, Colossal Order listened to what gamers wanted and worked tirelessly to make sure the community could be a part of the process.“Because we are still a small team, it was important to us that there were tools there so that people could create their own fun and share it with others,” explains Mariina.

Judging by the response so far, it’s a strategy that’s paid off. Browsing through the game’s Steam Workshop, you’ll find just shy of 100,000 different pieces of user submitted content. “We’re very happy to see how engaged the community is,” beams Mariina. “There’s definitely a mutual respect in terms of our team and the really active people in the community.” Yet for all the fun that the community have been having with the game so far, it’s the latest expansion, Natural Disasters, where Colossal Order are adding the most new content we’ve seen to Cities yet. “Our focus as a studio is on implementing things that only we can do for the game, adding new features that modders can’t,” explains Mariina.

As you’d expect from the title, Natural Disasters introduces mother nature’s vengeful side to your lovingly crafted cities. Not content with just letting you juggle rising expenses with your moaning citizens, now you will have to survive tornadoes, tsunamis, earthquakes, thunder storms, forest fires and even meteor strikes. 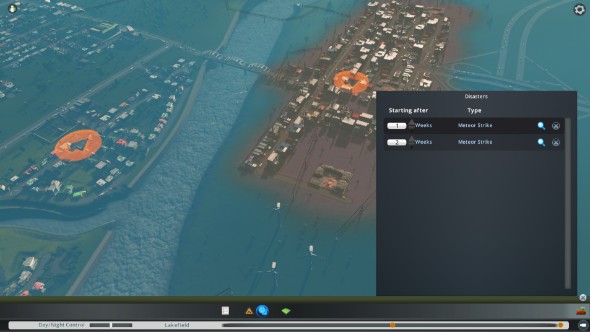 The first of these that we get to see firsthand is perhaps the most outlandish: the meteor strike. Each disaster has a severity level ranging from one to 10, and at full blast the meteor strike is a thing of brutal beauty. Without warning a flaming meteor the size of a small moon comes hurtling down from the sky, instantly taking a slew of offices with it. Where a booming business district once stood there now sits a gaping crater, with a fire viciously making it’s way across the surrounding streets.

While the others largely function as you would expect, the tsunami is probably the most impressive. Seeing that wave rise up and drown your entire city, floating cars, drifting sewage and all: it’s truly a sight to behold. Um, a horrific one, obviously.

Thankfully, you aren’t completely defenseless against mother nature’s fury, with a wealth of new tools at your disposal. You can install emergency radio broadcasts to help evacuate people, use satellites to track meteors, repair roads damaged by earthquakes, and even build emergency services centres which send out little helicopters and rescue dogs to help seek out survivors. 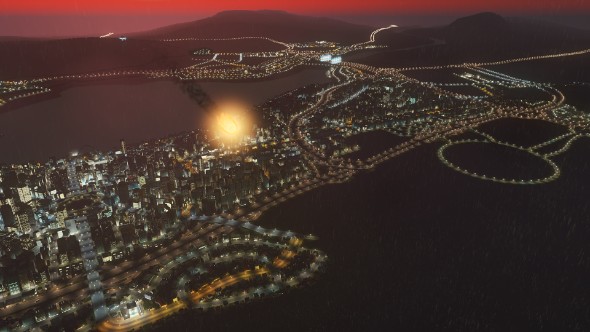 These disasters are implemented into the game in two ways, either through an option to randomly generate them during freeplay or through the game’s other major new addition: the scenario editor. Scenarios are exactly what they sound like, adding the genre staple of win and lose conditions to the game. Shipping with five developer-made scenarios, Colossal Order will challenge you with saving your city from impending disaster under five very different set conditions. Yet while this is the closest they’ve come to a true ‘campaign’, these five scenarios serve as more of a template for the community to follow than anything.

This scenario editor will be a free update to everyone who owns the base game, allowing you to create your own sets of win or lose conditions that you can share with the world. If you want to stay true to the genre you can choose to play a scenario where dropping your population to a certain point results in a loss. If you’re feeling a bit more sadistic, you can set a scenario where a tsunami is unleashed on your magnificent metropolis once your bank balance hits a certain figure. There are a wide range of possibilities and combinations available to play with, meaning that the community will be churning out even more great content for a long while to come.

It’s this unique approach to development that ensures that Cities:Skylines will outlive many of its peers. While every developer waxes lyrical about how integral the community are to their game’s success, at Colossal Order, the relationship is truly symbiotic. When asked what she’s most proud about her work on Cities: Skylines Mariina smiles. “It’s the community we’ve created and our communication with them. It’s not all about us making a game for the community but also the community developing the game with us as we go forward. Together – with the community -we can create something great.”