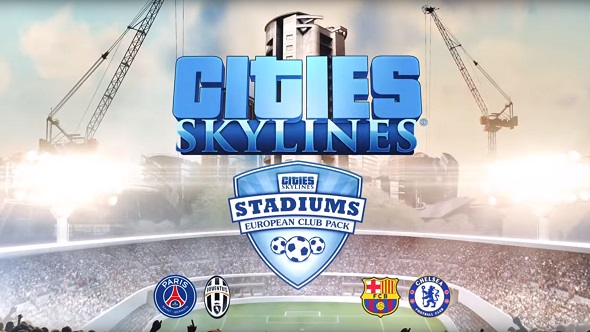 Virtual city planners will soon be able to set their football teams up in real-world stadiums, thanks to the latest DLC for Cities: Skylines. Titled “Stadiums: European Club Pack”, the new content adds the stadiums, colours, and logos of Chelsea, Juventus, Paris Saint-Germain and Barcelona (so Paradox Interactive are one up on FIFA 17, there).

Thirsty for more long-term planning? Check out our list of the best strategy games on PC.

The European Club Pack bolts on to the Match Day expansion, which launched for free in June and enabled players to build sports venues for the first time. As well as taking a cut of the ticket sales for match day crowds, the expansion challenges players to manage the infrastructure demands – such as additional traffic – of a major event.

Unlike the Match Day expansion, however, the European Club Pack will cost money: £4.79 UK or $5.99 US. This has drawn a mixed response on Reddit, with plenty of comments pointing out that the game’s vibrant modding community has already made similar assets (for example, here’s Barcelona’s Camp Nou)and judging the new DLC as “not worth it”. Football licensing deals are almost always expensive, however, and as the contents of this pack are entirely cosmetic, no one is missing out on gameplay features.

As an aside, this once again raises the question of how far mods on Steam can take “inspiration” from real-world brands and IPs. According to the Steam Subscriber Agreement, the theoretical answer is “not at all”, yet there are thousands of free-to-download mods for hundreds of games which are explicitly based on such properties. Charging money for officially licensed cosmetic features when modders can make assets that just as good and free to download is a difficult proposition.

The European Club Pack is available on Steam today.