At midnight on November 30th, 2012, after months of petitions and protests, the lights turned out in City of Heroes. It was a decision many in the superhero MMO’s community found difficult to accept – and, in fact, half a decade on, a few still have not.

“We looked around and said, ‘Well, we’ve been playing this game for seven years’,” Chris ‘Warcabbit’ Hare remembers. “‘We’ve grown up. We’ve got a lawyer, a couple of graphic artists and 3D people, a whole bunch of coders. Screw this, we’re making our own game’.”

Today, Hare is design lead on City of Titans – an attempt to rebuild what the City of Heroes community lost, using Unreal Engine 4 and plenty of spandex.

The character creator is an important factor in any MMO, and that is doubly true in the world of superheroes – the costume forming the larger part of your avatar’s identity.

“The character, the person you are, is the most important thing and the most difficult of them all,” Hare notes. “I’m not saying the combat engine’s easy, I’m just saying, oh good lord, you have no idea how much effort has been put in.” 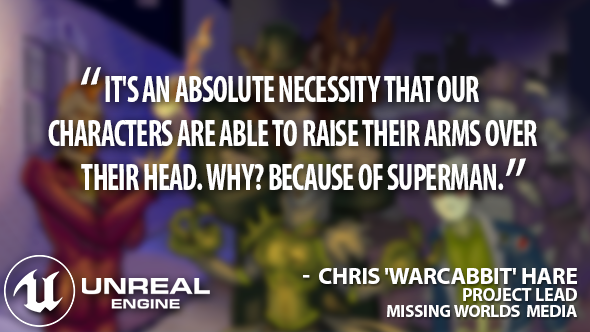 The trickiest part of freeform character creation has been, unexpectedly, posing. Like any object mesh in a game, 3D character models must begin in a default pose. You will recognise the t-pose from bugs – legs together, arms outstretched – and it is this convention that developers often stick to for ease of animation. In City of Titans, however, it has been far from easy.

“Our game does something that most games don’t have to do,” Hare explains. “It’s an absolute necessity that our characters are able to raise their arms over their head. Why? Because of Superman.”

The classic flight pose presents a problem. When Superman lifts his arm, he rearranges large portions of his pectoral and back regions too. If he were a work-in-progress City of Titans character, he would find huge, unnerving divots in his body as a result.

“It was just a matter of spending time to get the weighting absolutely correct, but it was definitely an area we did not anticipate,” Hare says. “That was our last major challenge, getting it absolutely perfect, so when the arm moves the rest of the body does not end up looking like an absolute horror show.”

If you hear Missing Worlds Media say they are taking City of Titans all the way to the bank, do not mistake it for metaphor. Titan City’s centrepiece is an enormous, marble-heavy building in the style of New York’s most imposing examples.

“New York in general has a lot of very distinctive banks of the appropriate era, thanks to [American founding father] Alexander Hamilton,” Hare points out.

Environment artist Thomas Djalloul embraced the challenge, first blocking out the bank to tackle its scale. “You have to fill this entire place with props,” he says, “and if you don’t have enough or don’t place them correctly it seems really empty.” 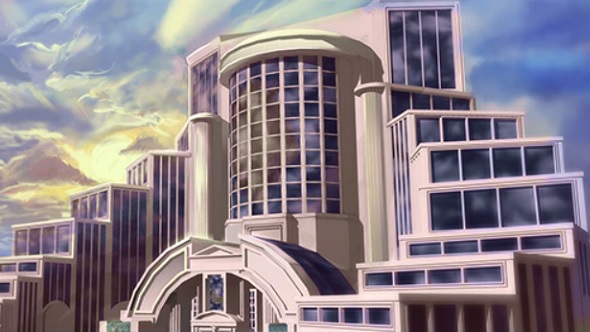 The finished building is defined by dramatic arches and reflective surfaces, as well as its natural light. Djalloul created stained glass windows, and a dome modelled after the Cattedrale di Santa Maria del Fiore in Florence.

“As an environment artist, you have to think about the modelling, the texturing, and also the lighting and composition,” Djalloul explains. “I played City of Heroes as well, and it’s about the atmosphere. You know you’re not in 2018 – it’s another age and another world.”

“I know how easy it is for an internet project to vanish, but we’re still making meaningful updates and moving forward and getting closer in a very real way,” Hare says. “People have lost jobs, got six-figure jobs, gotten married, divorced, and married again, had babies and horrible car accidents, and they’re still with us. We’ve all come together and it’s made this a wonderful thing.”

City of Titansis scheduled for a 2018 release.Unreal Engine 4 is now free.