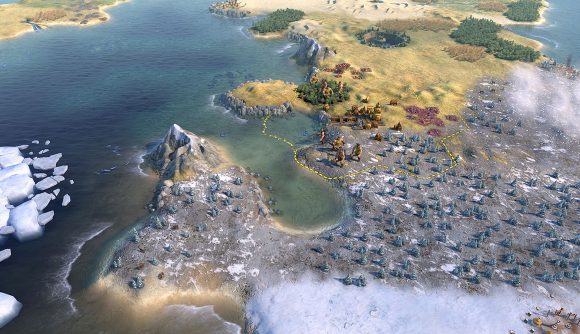 Busatti was challenged by his colleagues at Civ developer Firaxis to “create an example environment skin using only the tools and off-the-shelf modelling software” – so, no internal dev tools. He came up with a total environment conversion, and a clear demonstration of just what’s possible with Civ VI’s basic SDK and other readily available tech. Details, and more gorgeous screenshots, are on this thread at CivFanatics.

This is a pretty big deal given how limited Civ V’s SDK was when it came to graphical modding. Ahead of Civ VI’s release, we spoke with some of the community’s best modders, and this area was universally agreed to be a weakness with the previous game. In this respect then, Civ VI has been a clear improvement. You can sample the results for yourself at Environment Skin: Sid Meier’s Civilization V on the Steam Workshop. It’s compatible with every version of the game, up to and including Gathering Storm.

Busatti has done a great job recreating the look of Civ V, through a more muted colour key and modifications to all terrain textures. He’s even adjusted the density of water (modders have some godlike powers these days) and the base colour of the ocean floor “to match [the] lighter sand of Civ V.”

For more cunning plans: check out the best strategy games on PC

Personally I found the new look a little jarring at first, but I’ve adjusted to it since and I really enjoy its warmth. Many players haven’t been able to get to that point, though, so it’s great that a mod now exists to help them enjoy Civ VI.

If you’d like a rundown of other great ways to modify your game, we’ve a list of the best Civ 6 mods for you to look at. If we’re honest it could do with an update, but everything there is still worthwhile.