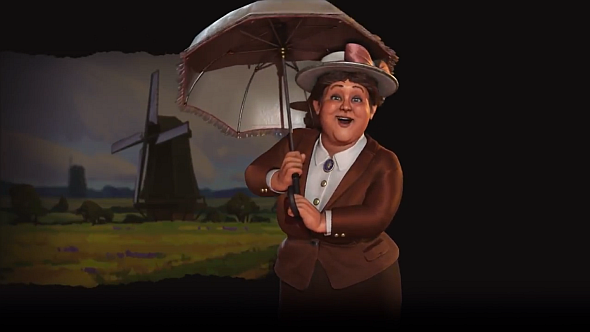 As was leaked yesterday, the Dutch get polders as a unique tile improvement, and Wilhelmena’s unique ability is themed after her Radio Oranje wartime broadcasts. This ability grants culture for every incoming or outgoing foreign trade route, and bolsters the loyalty of any city that sends an internal one.

Here’s everything we know about Civilization VI: Rise and Fall.

The Netherlands’ unique unit isDe Zeven Provincien, a class of warship that fought in the Anglo-Dutch wars. It gets bonus range and combat strength, and further combat strength when bombarding defensible city districts.

Here’s the announcement on Civilization.com.

The Dutch will be led by Queen Wilhemena, who ruled the Netherlands between her ascension in 1890 and her abdication in 1948. Wilhemena ruled the country over both World Wars, and is particularly remembered for her assistance in organising and encouraging Dutch civilians and resistance fighters during WW2. She did this remotely, from London, using Radio Oranje, a daily transmission to the Dutch people that Queen Wilhemena delivered 34 times.

A Reddit thread documenting the reveal of the Dutch civ suggests that Radio Oranje will be the name of Wilhemena’s unique ability. While no information has been announced yet, some speculation suggests that it could be linked to Dutch city loyalty, or provide increased penalties to civs that occupy Dutch settlements.

The civ’s unique upgrade will be the Polder. It seems to be a farmland tile that can be built on water, and provides +2 food, +1 production, and 0.5 housing. It also seems to come with one of The Netherlands’ iconic windmills.