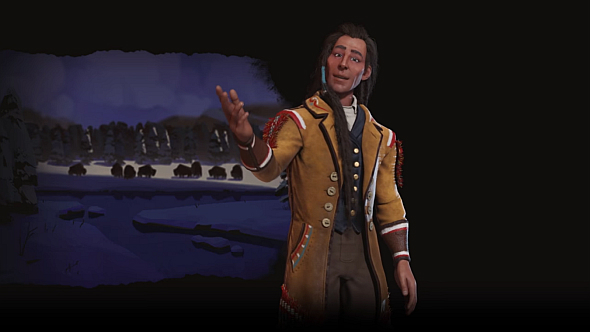 We had to wait a while for Civ VI’s first expansion – so long that we’ve lost count of how many turns it has been now since the base game released. But Rise and Fall is here now, bringing with it all manner of strategic wrinkles to poke at.

Poundmaker, leader of the Cree, is one of the new leaders you will gravitate towards first because he offers a radically different approach to the age-old empire-grabbing Civ leaders. But how do you get Poundmaker to make the most pounds? Which decrees should the Cree decree? Here’s a guide to explain all that. 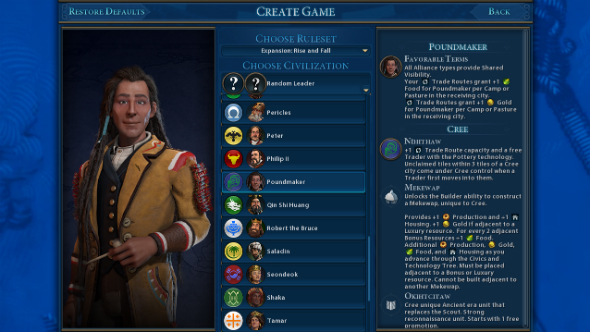 In addition to having demonstrably the best name in the game and the heartbreaking good looks of a noble leader dedicated to both peace with the Canadian government and the preservation of his people’s tradition, Poundmaker also comes with clear mechanical benefits.

This leader ability defines much of your approach when in charge of the Cree, and as you may have deciphered, it is heavily swayed towards early-game busy-makin’, so it is vital to make the most of your early-game advantage by getting the first 25 to 50 turns just right.

As leader of the Cree your chief objective is forging Alliances, creating trade routes, and generating gold. That gold haul will buy you freedom in the later game to pursue Science or Culture victories, and it will ensure you always have a little spare in your wallet to panic-buy a military unit or two if you are ambushed by Barbarians or warlike civs.

Favorable terms also makes it easier to grow cities quickly, which is a double-edged sword with Rise and Fall’s new loyalty system, but can certainly be turned to your advantage.

As discussed, Poundmaker’s very much about making love (and pounds) rather than war. The Cree have only one combat bonus and it comes at the very start of the game with their unique unit, the Okihtcitaw (more on him later). This, combined with the hardwired tendency to make Alliances, means you really shouldn’t be going for a Domination victory with the Cree. 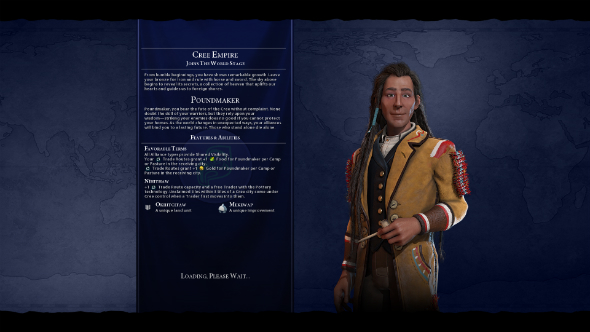 Thank god we are writing this rather than trying to say it aloud. The Okihtcitaw replaces the Scout, at a higher production cost of 40 (as opposed to 30 for a regular store-brand Scout). However, his combat strength is up from ten to 20, matching the basic Warrior you begin the game with. They also begin with one promotion, although they are Scout-based promotions rather than Warrior-based, so you can’t buff up that 20 combat strength off the bat.

This is huge in the first few turns. It means you don’t have to decide whether to build a Warrior or a Scout, because the Okihtcitaw is both. And because of that emphasis on trade and alliances, you want to explore as much of the map as possible, as early as possible, in order to find some friends. This unique unit lets you go scouting without vulnerability to Barbarians. Also they look incredible in combat, so… 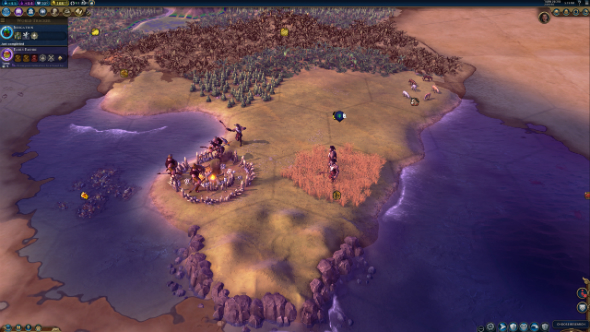 Description: Gains +1 Trade Route capacity and a free Trader upon researching the Pottery technology. Unclaimed tiles within three tiles of a Cree city come under Cree control when a Trader first moves into them.

Here is another incredibly powerful early-game buff for the Cree. It makes your first technology research a bit of a no-brainer – in the vast majority of games it should be your first pick, the only exception being those games where you haven’t met anyone or built more than one city yet. And in that case, well, whathaveyou been doing?

Once pottery is researched and you get your Trader, send them out to the nearest city owned by another civ (not counting city-states). The extra tiles you gain by forging that path will come in handy later on should that other civ try to muscle in on your territory, or test your city’s loyalty. 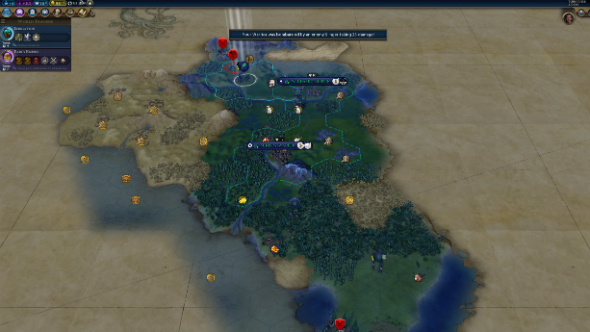 The nice thing about Poundmaker and the Cree is that they allow you three different victory routes, but at the same time the civ’s set up such that it is clear what to pursue. Clearest of all: do not go for a Domination victory.

Nothing about the Cree’s unique abilities or units will help you along the way to this, and in fact, you’d be actively flouting them. Declaring war on civs tends to limit the number of Alliances you can create, as if that needed to be said, likewise with trade routes. Who wants to build endless traders and watch them get savaged by enemy Slingers every time they get three tiles clear of their city?

Similarly, there is nothing about the Cree that earns you an advantage when pursuing a Religious victory. Some extra early and mid-game gold might speed up production towards Temples, but beyond that you are really up against it when contending with Spain and Khmer, who have natural advantages at spreading their religions. 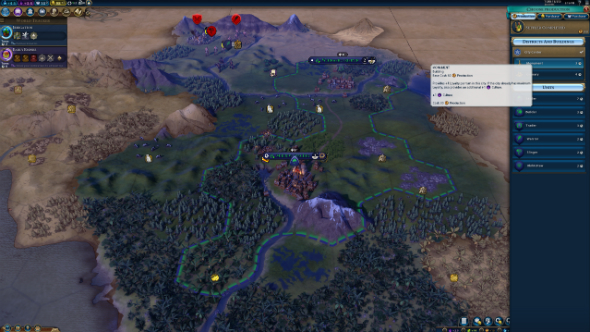 That leaves three distinct paths, all of which rely on a lot of gold production. Science victory can be achieved by setting up an efficient civ in the early game, generating lots of gold and then buying tiles and workers to speed up science production. Later on towards the end of the game, you can then use your Alliances to broker research agreements. This isn’t the best suited strategy for Poundmaker, but on lower difficulties or against weaker human opponents it is possible.

Next there’s the Culture victory. Since keeping denizens happy is of paramount importance in the Rise and Fall expansion, going for a Culture win is a good way to feel your way round those new loyalty and governor mechanics. And because you will be doing lots of trading and earning lots of gold, you will also be able to boost your culture by buying more great people and other civs’ great works in the late game. This victory condition depends on getting the right civics and the right government types early on in order to stretch your legs out, culturally speaking. It also bleeds over into a third approach, should all else fail: going for the Points victory.

A vast reserve of gold is incredibly handy in the last 50 to 100 turns when it is looking like the game will come down to whoever has amassed the highest score. You can buy an army and try to take a nearby city. You can hoover up great works from civs currently sitting on higher scores. You can buy spies and try to sabotage rivals’ plans, too. It is not as satisfying as launching impressive rockets onto foreign planets, but whatever gets the job done. Wonders help you in far-reaching ways depending on their buffs, but since Poundmaker has a few different approaches available there isn’t one particular batch of obvious wonders to target.

With that said: going for the Pyramids early doors can’t hurt. It generates +2 culture and bestows a free worker on you. The Colosseum brings a +2 culture bonus to all cities within six tiles of it too. Later down the line, Big Ben and the Casa de Contratación are well-suited to a trading civ. The former British landmark gives +6 gold per turn and +3 Great Merchant points along with one additional economic policy slot, but most importantly it doubles your current treasury reserves. Time that well after saving up for a few hundred years and you are well-positioned for a late-game surge. The Casa de Contratación gives +3 great merchant point per turn and three Governor promotions, along with buffs in gold, production, and faith for all cities outside your home continent. Consider Great Zimbabwe too: +1 trade route capacity, and your trade routes from this city get +2 gold for every bonus resource in this city’s territory. Oh, and +5 gold and +2 Great Merchant points per turn. Handy. 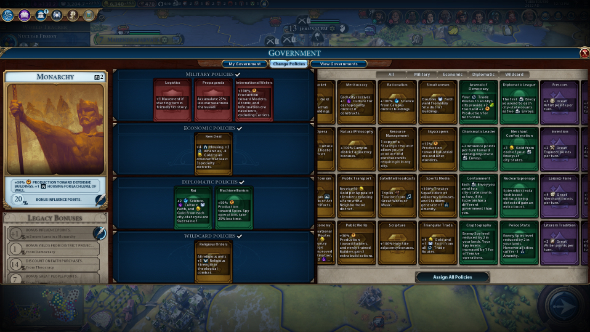 That means opting for Classical Republic initially, then moving onto Merchant Republic as quickly as possible. Do not rush forwards from Merchant Republic to Democracy just for the sake of it, though: the 15% discount on all gold purchases and +2 trade routes is worth holding onto until you are sure you can fill three economic policy slots with something better.