For the latest on the now-announced Civ VI expansion, check our post about Civilization VI: Rise and Fall.

Sid Meier’s Civilization VI turned one year old last month. It has been a busy year for Firaxis, who have added plenty of new civs to the game along with releasing a number of rebalancing patches. Lead designer Ed Beach was in a reflective mood when speaking to us about the game’s progress recently, but he also looked forward to the places it has yet to go, and how long that journey might last.

PCGN: How do you feel Civ VI’s first year has gone?

Ed Beach: It’s been going great; it’s the exact path that we’ve anticipated. I was on the Civ V development team when that launched, and I saw that through to beyond the Brave New World expansion at the end. We probably have a good half to two thirds of the team that had worked on previous Civ titles as well, so we knew what the trajectory of a big strategy title is like – it’s a big game, it’s complex, it doesn’t come out of the gate in perfect working order. We can get an awful lot in place when we ship, but the more time we spend with it, and the more time we spend listening to the fans, the stronger the product becomes. 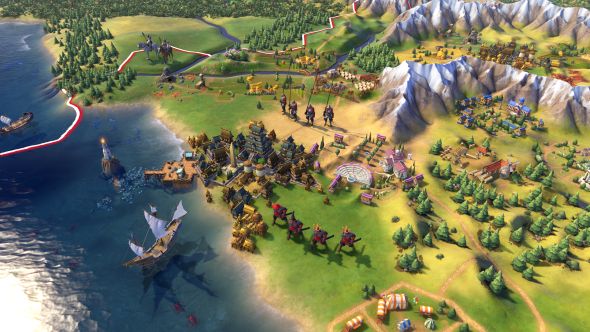 Where do you think it still needs improvement?

EB: I think it probably is the back half of Civ VI that could stand to have some more content. The game right now is strong in the beginning – there’s a lot of interactivity with having to fight off the barbarians and planning out your city – but just like in Civ V, where Brave New World really fleshed out the endgame, we’ve talked about systems like the World Congress, where all the leaders of the world took stock of the global situation and made decisions based on that. That’s an area we have not addressed fully in Civ VI, and we definitely would like to get back to it.

Does that mean we might see a diplomatic victory or a World Congress in a major expansion?

EB: I’m not sure whether they’re going to be in specifically the same form as in Civ V, so I’m not going to promise a diplomatic victory, but those types of global interactions between the leaders are things we would strongly consider as great new additions to the system. It’s the kind of thing you don’t add in the patches or the DLC packs that we put out this year, so yes, we would have to wait for a larger expansion to add significant new gameplay systems like that.

In a follow-up enquiry about timescales for such an expansion, Firaxis provided the following answer by email:

We felt that the three years of post-launch support we provided after Civilization V launched were very successful. So we definitely are looking at that time period as our model for how to continue to improve, expand, and refine Civilization VI. With that in mind, a number of things that we were able to add to Civilization V will be strongly considered for inclusion again this time. 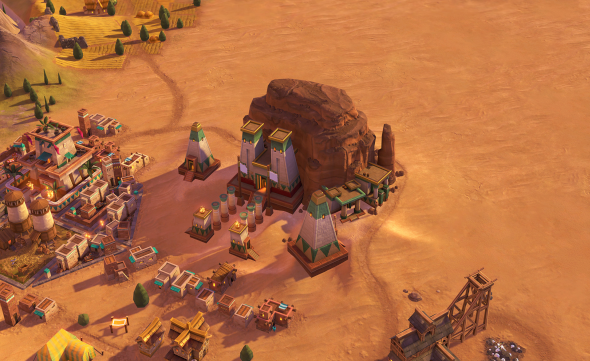 Civ VI launched with many of the series’s traditional systems in place. What challenges or opportunities does that pose for the future?

EB: It was very exciting for us to bring out a base game with most of the major systems that people expect to see in a Civilization title – religion was there, espionage was there – so as we get to rolling out large new systems, we’ll be able to take the game in directions it’s never been before. I can’t say exactly what we are cooking up, but we’re going to be layering on systems that are whole new takes on what major gameplay elements could be for the Civilization series, and that’s why people are going to want to stay tuned.

Could you give us any general, high-concept hints?

EB:The main thing we’re looking for in Civ VI is for the game world to be more dynamic, and right now you’re still seeing cases where, once the battle lines are drawn and the empires have carved out their place on a continent, there isn’t as much churn and turmoil as we’d like to see in a game that charts a full path through human history. So there’s definitely an opportunity to make the game more exciting and interesting by introducing elements that will spice that up, and make it so that once those battle lines are drawn, they’re gonna change and shift on people more than they are in the game right now.

Is that the thinking behind some of the new civs that can steal tiles from rival players?

EB: Yeah, that is part of it. Also Macedon, who don’t have any war weariness and can just keep going on a conquest spree as long as they want to, and Persia, who can declare surprise attacks without any additional penalty. There definitely was exactly that kind of thought put into some of the DLC civs. 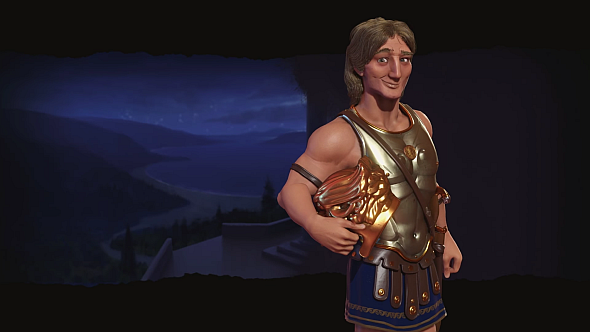 Civ VI reintroduces the ability to have multiple leaders per Civ. Will we see more of that from Firaxis this year?

EB: We definitely will lean into it more. It’s a system where we have encouraged the mod community to offer fresh takes on different civilisations by contributing additional leaders, so it’s not something that hasto be done by Firaxis, and by the time Civ VI is all fleshed out with the fan community, I think you’re going to see all sorts of civilisations with multiple leaders. But we have been thinking about which would be interesting civilisations for us to add a second leader to, and you’ll probably hear more about that.

What’s your impression of the content from the modding community in the last year, and do you feel they need more in terms of tools or support?

EB: We have been working on improving the support for the mod community – we put a lot of tools out earlier this year, so the modding community is getting up to speed with all that. It’s not always a simple process, so the more time they have with it the better the content, and the richer the catalogue, will be.

A key difference from Civ V is that you can now load mods, and ensure all players are up to date with them, in multiplayer games. So the different sites that organise multiplayer tournaments, or ladders, or whatever, have come up with the rule changes they like for a particular type of multiplayer match. So it’s really exciting to me that we can have established mods that are directly targeting the multiplayer communities. It was something we never got fully supported in Civ V – people had to come up with workarounds. 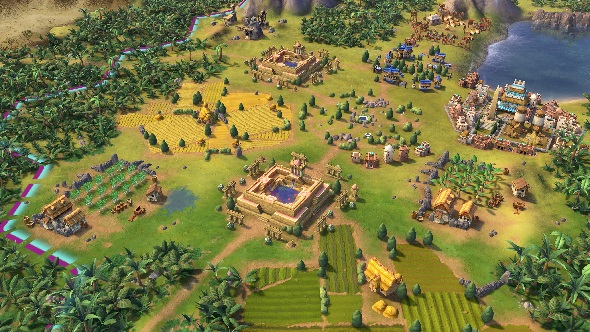 You’ve supported that yourselves by releasingnew rulesets in the DLC packs, too. Are you pleased with how they’ve been received?

EB: Yeah, absolutely. We have some contacts in that community, so if they need things or have feedback for us, we get word of that. There have been announcements that a Civ VI esports league is gonna be started. I’m not sure we’ve quite taken off to that level, so there’s definitely room for improvement there, but just the fact that it’s being talked about I think is exciting.

Do you have anything planned to continue that push?

EB: If you look at Civilization over the course of earlier titles in the franchise, there have been many different multiplayer modes and different ways for people to set up games, and that’s something we’re looking at: are we supporting all the different modes we need to? The other thing I think the community is interested in is inter-operability between the Mac and PC customer bases, so we’re working to make sure that gets brought online. 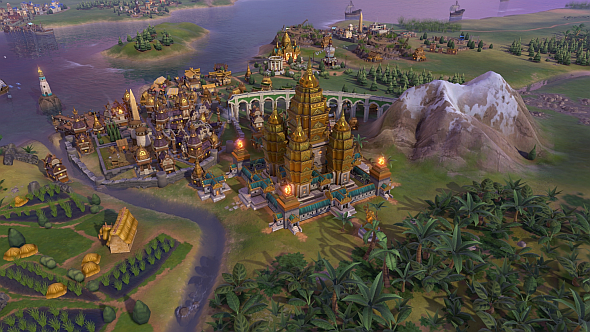 Internal balance is important in a multiplayer context – you’ve introduced several new civs over the last year, and my sense is that they’re all a bit stronger than the launch ones. Are you concerned about power creep?

EB: I do think the DLC civs are a little stronger than the base game civs were, and if you look at what we did with our summer update, we increased the power of some of the civilisations – Norway and Spain both got buffed, and England had been buffed earlier in the year.

Sometimes civs surprise you once they get in the hands of tens of thousands of players – they come up with ways to use them that you hadn’t anticipated. For instance, I saw people online posting that they were getting cities with populations over 50 with Indonesia, who just came out. I hadn’t been able to do that. So they’re taking advantage of these new capabilities in ways no-one on the team had anticipated. That said, there were definitely base game civs that were overpowered – Scythia, for instance.

I do think people are enjoying the feeling of power that they’re getting from some of the new capabilities, so I think we’re gonna draw a line – which may be more equivalent to where the DLC civs are – and try to bring all the civs up to that level rather than nerf everyone down. I think that’s the way to go.

Do you guys plan to allow source code access for DLL modding?

EB: I can’t say anything about that – it’s happened in the past, but no promises right now. 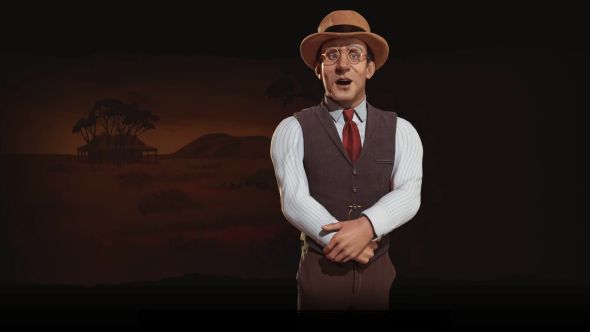 TBS has seen a big surge as a genre. Why is Civ still essential among this new crop of rivals?

EB: I think nobody focuses on the course of human history like we do. The great thing about that is we don’t have to provide the full backstory to all of our content, because a lot of people are familiar with our history: how there were different cradles of civilisation, and then the Western world fell into a Dark Age, then came out of that with a Renaissance. We just need to plug pieces of content in and bring out episodes of that history here and there. It’s a way to roll out a strategy experience that people immediately engage with.

I have a lot of respect for people who make a 4X strategy game in a fantasy or science fiction environment, because they have to create so much more of the story themselves. That’s a big challenge. But I think Civilization is always a story that we’re interested in, because it’s our own: it’s how we got to where we are right now. So I think it’s always going to have a significant place in that strategy environment.