Some don’t like to admit it, and claim to take the high ground by pursuing a cultural or scientific victory, but ultimately Civ 6 is all about domination. Whether you’re bringing artistic or scientific enlightenment to the world, you’re trying to beat someone else to it. And domination is hard, isn’t it?

Principled people, look away now. Here are some issues Firaxis overlooked, and which will undoubtedly get patched, but which for the time being, you can exploit to get a leg up over your enemies.

Aside from these exploits, is the game any good? Check out our Civilization VI review.

Most of the exploits we’ll talk about below stem from one root issue: units sell for way too much gold. In Civ 5, the compensation you’d get for disbanding a unit was pretty meagre, and even then you only earned it if the unit was inside your borders. In Civ 6, deleting a unit will return you gold equal to half its production cost, and you can do this even if it’s in foreign territory. Moreover, you can do this even if the unit is out of moves.

Say you’re fighting someone, it’s the end of your turn, and all your units have moved. It’s usually obvious which ones are faced with losing fights. Why do anything other than sell them? You’ll get back a fair amount of money in each case and deny the enemy a kill and possible promotion. 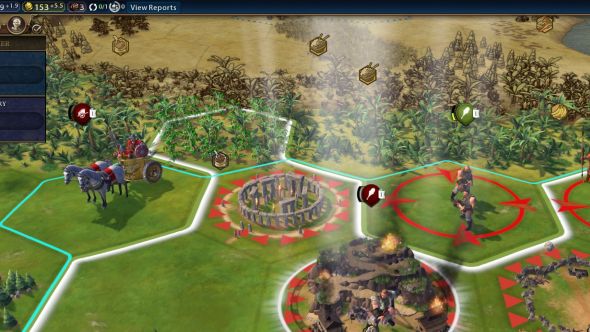 Armies and Armadas sell for more than they cost

Welcome to probably the biggest exploit in the game right now. Civ 6’s new multi-unit formations – armies and armadas – can be bought and then immediately sold for a profit as many times as you like in a single turn. Essentially, once you have the ability to purchase an army or armada, you have infinite gold.

Credits to Redditors RandomMagus, who discovered this, and Drogzar, who popularised it. RandomMagus reports buying a Battleship armada for about 3,500 gold, and selling it for 6,495, banking nearly 3,000 gold inonetransaction! Drogzar corroborates, having profited 3,300 out of a Destroyer armada. With such huge quantities of gold available so readily, there is almost nothing in the game you can’t do; you can instantly buy any unit or building, or bribe the AI to give away anything they own except their capital city.

The only reason we can see that this doesn’t totally ruin any game you play, is that the ability to form armies and armadas is only unlocked with the Mobilization tech, which is relatively late-game.

HighClassGuy on Reddit figured out how to take the high selling price of units and optimise it by stacking policies and Scythia’s unique ability on top. Units already sell for half their production cost, so if you add the Chivalry policy (unlocked by the Divine Right civic), which gives +100% Production toward cavalry units, you can convert production to gold at a 1:1 ratio by making and selling cavalry. This is pretty strong with any Civ, since the bonus production to cavalry means you can make money and use it to buy other stuff much faster than building that stuff the old-fashioned way.

With Scythia, though, this trick becomes genuinely game-breaking. Scythia’s UA gives you a free second copy of a light cavalry unit or Saka Horse Archer whenever you train one, so paired with Chivalry, you’re essentially making two cavalry units for half the cost of one. This makes both winning wars and earning huge amounts of money trivial. One Redditor, tmffaw, says he was churning out horse archers with five or six cities, and earning over a thousand gold per turn. Though he does say having to sell six to twelve units every turn “did make me want to stab myself in my eye”.

You can order your builders to chop down a forest for a production bonus to the nearest city (a favourite trick in multiplayer games of Civ 5 to get the Great Library first, incidentally).

In Civ 6, however, the production bump doesn’t scale with game pace, meaning that logging will far outstrip your cities’ natural production output on quick or online speeds, and there’s no penalty for doing it outside your borders. You can roam the map with Builders, rather than scouts, and chop down every tile of forest you can find, like a deranged Amazonian logging company. If your Builders are ever in danger, just sell them (see below).

Don’t wait for your Builders to disappear after using all three of their charges. Sell them after they use two. Because, as we’ve said before, you get fully half a unit’s production cost back in gold after you sell them, this means you can buy a third Builder unit outright after selling two, and you can buy it at any city. If you use all three of its charges, you get seven charges for the price of six.

Fortunately for poindexters who care about such trivia as ‘game balance’ and ‘fairness’ and ‘not completely ruining the experience for yourself’, each of these exploits has a simple fix. Reverting to a smaller sum for selling units, and none at all if this is done outside of your borders, would solve pretty much all these issues.

But until Firaxis puts out that inevitable patch, happy domination.