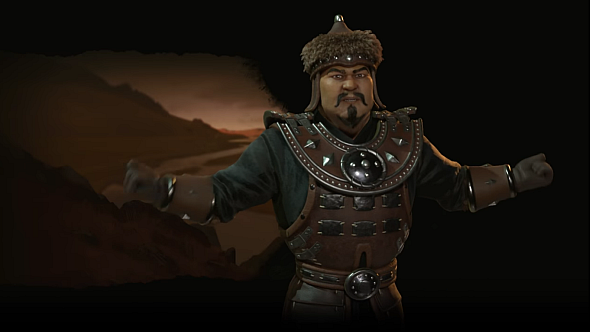 Mongolia are the third civ to be added in Rise and Fall, the expansion for Civilization VI. Inevitably, they’re led by Genghis Khan, and will have unquestionably the strongest cavalry in the game.

Here’s everyone else joining the party in Civilization 6: Rise and Fall.

The Mongolian unique ability isÖrtoo, named for a system of supply routes used by Genghis Khan and his successors. Starting a trade route will immediately establish a trading post in the destination city, and the Mongols receive a level of diplomatic visibility for having a trading post in any city of a civ. Further, all Mongolian units get a +3 combat bonus for each level of this visibility. So if you go to war with Genghis, plunder any trade routes he’s sending you!

The Keshig returns from Civ V as Mongolia’s unique unit. It’s a mobile horse archer that confers its movement speed to any unit in formation with it. No word on whether it can move after attacking, which was key to its amazing strength in Civ V.

Mongolia gets a unique building, theOrdu, which replaces the stable. Ordu translates to ‘palace tent’ – it was the centre of a Mongolian tribe, serving as a mobile headquarters. It grants a movement bonus to any cavalry units trained in a city with this building.

Genghis’s leader ability is Mongol Horde, which grants a +3 combat bonus to all cavalry units, and a chance to capture enemy cavalry when defeating them in battle. Between this, the Keshig and the Ordu, Mongolia will be able to field the game’s most powerful and mobile cavalry. The obvious play is to beeline cavalry techs and start killing as early as possible, because by the late-game when cavalry are redundant, most of Genghis’s advantages will have expired.