Update November 3, 2016: thanks to Take-Two’s quarterly earnings call yesterday, we have some new, official sales numbers for Civ 6.

Civilization VI is now the fastest-selling entry in Firaxis’s storied strategy franchise, having ‘sold-in’ over a million units in less than two weeks since its launch on October 21.

Wondering what all the fuss is about? Check out our Civilization VI review.

“Civilization VI is the fastest-selling title in the history of the series and is exceeding our expectations, with sell-in already surpassing 1 million units”, said Take-Two CEO Strauss Zelnick. Note that ‘sell-in’ refers to digital sales and numbers shipped to stores, it doesn’t necessarily mean units sold through to the end user. Nevertheless, SteamSpy confirms the number, estimating 1,039,474 people actually own a copy (within a margin of 26,233).

Zelnick also noted that the Civ franchise as a whole has sold in “over 37 [million] units worldwide.” That puts it ahead of Mortal Kombat, which has been going for just one year less than Civ, and just behind Street Fighter. (Lots of classic fighting franchises seem to have stalled in the high 30 millions. Odd.)

According to SteamSpy, the average Civ 6 owner has played for just over 23 hours since launch. Globally, SteamCharts says it has been played for 26,460,623 hours at time of writing, which is 3,020 years. That’s roughly three-fifths of all human recorded history.

Update October 25, 2016: Civ 6 remains in third place on the Steam chart by player count, with 730,000 purchases since release. With a weekend of play behind us, we take a deeper dive into the stats.

Sid Meier’s Civilization VI unlocked at the end of last week, and immediately drew enough players to storm into third place on the Steam charts. Not only has its position by player count strengthened after its opening weekend, but it’s already sucked up enough man-hours to build all the Wonders of the world several times over.

Civilization VI’s new record for peak concurrent players is 162,314, set on Saturday, October 22. Not only does this put Civ 6 comfortably at number three for most current players this week, it actually puts it at number six of all-time by current players, narrowly ahead of Left 4 Dead 2.

SteamSpy estimates that 735,891 people now own a copy of Civ 6 (within a margin of about 20,000 – note that SteamSpy isn’t perfectly accurate). If that were a country, it would be bigger than Macau.

The average play time among those is ten-and-a-half hours, which is a fair amount in only four days of release, but no surprise for a series so compulsively playable that “one more turn” is its official hashtag.

SteamCharts records a total of 11,885,428 hours played. That’s 1,357 years, which is enough time to build the Great Pyramid of Giza 68 times, or for the theorised Breakthrough Starshot project to make 34 round trips to Alpha Centauri.

Clearly, there’s been some heavy evening and weekend bingeing.

Original story October 21, 2016:Just as we’ve accepted that Justin Bieber is probably going to be around for a while and Ben Affleck was actually a pretty good Batman, so have we all accepted that Dota 2 and CS:GO will top the Steam most-played charts week in and week out.

But the positions below these two titans are much more fluid, and on its very first day of release, Sid Meier’s Civilization VI has staked a decisive claim on third place. The latest instalment in the storied 4X strategy series registered a peak so far of 92,289 concurrent players. 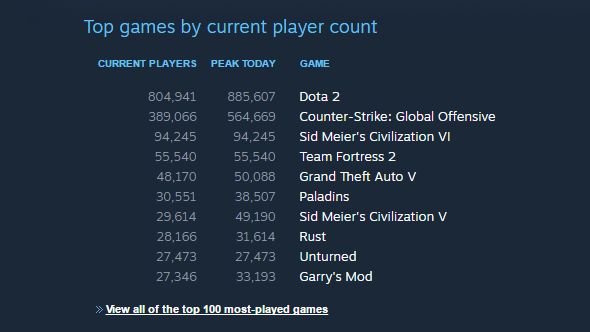 This means Civ 6’s nearest rival only has 58% of its peak players. Civ 5 isn’t far behind that, with 53% of the numbers of its successor. Firaxis now joins Facepunch studios, who made both Rust and Garry’s Mod, in being the only developer other than Valve to have more than one game in the Steam top ten.

If you’re wondering why the last Civ game is still in the top ten, six years after its initial release and more than three since its last major expansion, the answer is mods. Firaxis have clearly taken lessons from this, integrating mods in XCOM 2 and even more deeply into Civ 6, makingmods available in multiplayerfor the first time. So all the features are in place for Civ 6 to emulate its predecessor’s success.

It’s difficult to speculate on sales figures based on this launch-day performance, but games don’t break into the third spot on Steam – which is effectively the top spot, thanks to Dota 2 and CS:GO – without selling pretty well.

In a week’s time, when more data is available and figures are more consistent, we’ll have a look at SteamSpy and see how these numbers are holding up. If you’d like to do that yourself in the meantime, click herefor up-to-minute stats.