Update, February 6: The Zulu have been confirmed as the next civilisation to feature as part of Civilization VI: Rise and Fall.

The Zulu will feature in Civilization VI as one of the last civilisations to be confirmed as part of the upcoming Rise and Fall expansion. Lead by Shaka, the Zulu became one of the most feared military forces in the world.

Here’s everything we know about Civ 6: Rise and Fall so far.

The Zulu’s unique unit are the impi. These units, replacing pikemen, are cheaper than their counterparts of similar eras, earn XP faster, and receive a unique flanking bonus. The civ’s unique ability is Isibongo, granting bonus loyalty from conquered cities. If Shaka conquers the city with a unit (and had the proper Civics unlocked) the city will be upgraded into a Corps or Army. The Zulu’s unique district is the Ikanda, a replacement for the encampment provide additional housing, and allow for faster army creation.

The Zulu’s leader, Shaka, began his military life under the command of Mthethwa chief Dingiswayo, but when his father died in 1816, Shaka took control over the Zulu armies, leading them on a “march of conquest” across southern Africa. His unique ability is Amabutho, which also speeds up the creation of Corps and Armies, as well as providing both with additional base combat strength.

You can check out the Zulu is a first look video at the top of this article, and read more about Shaka and the Zulu here. Civilization VI: Rise and Fall releases on February 8.

Original story, January 25:There are still two civs to be officially revealed in Civilization VI’s coming Rise and Fall expansion, but after a couple of new leaks, one of them seems almost certain: the Zulus are returning.

The proof is a Civilopedia entry for the Ikanda, which will be “a district unique to Zulu” and replace the encampment. The source of the leak was Marbozir’s Twitch stream, with a screengrab taken and posted to Reddit here. We’ve checked our own preview build of Rise and Fall, and the entry is still there, though every other reference to forthcoming civs has been carefully scrubbed. Clearly, the Ikanda slipped through the net – either in a genuine accident, or because 2K are clever and know people will generate their own hype by digging through preview builds. 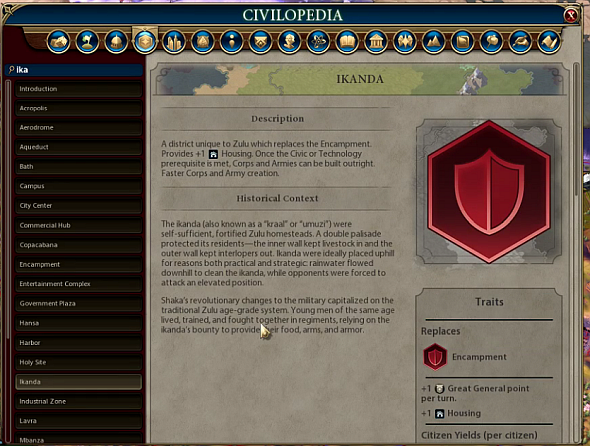 The fan-favourite Zulus are certainly a canny choice for exactly that purpose. That Reddit thread is already speculating about how Shaka and the Impi – the Zulus’ perennial leader and unique unit throughout their appearances in the Civilization series – will be implemented this time.

As for the Ikanda, it will provide +1 housing, and enable Zulu players to build Corps and Armies outright once the appropriate civic or tech has been researched.