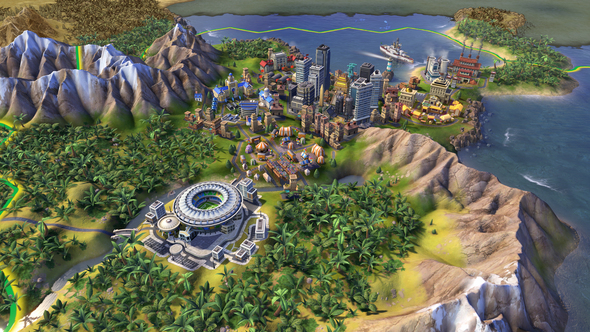 Civilization VI’s problem is that it’s following arguably the best and most complete game the series has ever seen. There isn’t much about Civilization V in its final, expansion-bolstered form that makes you long for a new game when you play it. And yet a new game cometh, just the same. A new game with new ideas and different mechanics, which forces you to change your approach to the time-honoured game.

But are Firaxis making changes in the right place? Are they improving on weaker elements, or throwing out the bits of Civ V that worked perfectly well in the first place? After a lengthy Civ VI hands-on session, I found a quiet corner with senior producer Dennis Shirk and asked him about the many changes Firaxis are ringing in.

Related: check out everything we know about Civilization VI.

PCGamesN: The first thing I noticed is that workers aren’t automated. Is that true regardless of options and setup?

Dennis Shirk: We wanted builders to build things instantly, so automating them didn’t really make sense anymore. And because the tile placement game is the way it is, I wanted there to be purposeful things that you want to build, so if you let them automate they might build over things that you might want for a district or a wonder later. And then the wonder has to destroy whatever you just made. Also they only get three charges, so you can build three things and then the builders expire, and you have to build more later. So we wanted it to be a more purposeful series of events. When I first started playing way back in the prototyping of Civ 6 I was one of those people who automated my workers. It’s something I felt I didn’t need to pay attention to. Now I couldn’t imagine having that in this system because every build is important. When you have something that you need to do or need to improve, every decision is important because they expire when they go away.

Correct, it’s about playing the map, which is really what we were going for. So depending on where you start – and how often you hit restart to get the map you want – it will determine how you play, because the Barbarian AI has changed a lot in this one. It’s a lot more aggressive. It’s not raging, but they are now smart enough to send out Scouts that report back to camp. So if you don’t kill those Scouts, depending on the type of camp, they’ll either send a mounted raiding party, land raiding party or naval raiding party and burn all your stuff down. So generally, building in early game is not a good idea because it’s hard to protect and hard to keep your improvements from being burned down. So you usually want to build a couple of military units early on, a Scout or maybe two scouts and then push back the fog a little back to make sure there are no camps – if camps are there you need to address them immediately because they’ll generate scouts to see who’s out there. That’s what I do before I settle in and do my builds, get the amenities up, things like that.

I think that explains the situation I got into, where I was just running my first Settler away from a mounted Barbarian unit.

Barbarians are very different. If you see them, kill them immediately – he’s either seen your city borders or he’ll spot your unit. And if he spots your unit, especially with a civilian like the settler, they’re going to try and set someone after it. 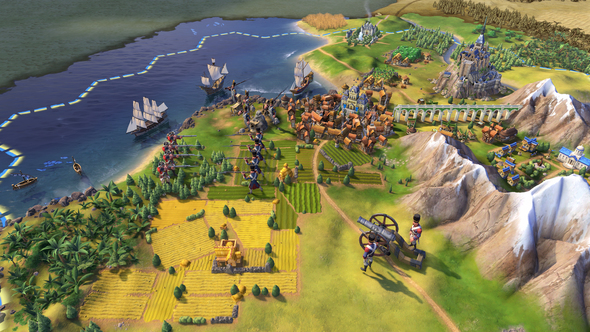 I was always a bit unclear on how Barbarians worked in Civ V – is this is a completely different system?

[Barbarians in] Civ V were more of a generic, ‘This is how you learn combat’ [experience]. They weren’t hard to kill, they were a nuisance. We wanted to make them the next player on the map, so until you meet another civ you’re playing against something. It’s not just the stress that a Barbarian might be sitting out there, it’s also the stress of having to defend your borders early. You can’t just run out and have fun – well, you can on the lower difficulty but we want there to be an early game stress. So you might end up on a map, like a guy we had yesterday [at a press event], who had three camps around him, and almost all his first 40 turns were [spent] beating back the Barbarians. When he got that done it was awesome and really satisfying because he controlled all the space. Sometimes you might get one, or no camps, because they’re elsewhere. We want avoid the thing where it’s always the same start, and it’s always played the same way.

When I met Pedro II, he demonstrated this objective he has to encourage great people towards his civilization through a little cutscene that I presumably triggered by not doing something within in a certain amount of turns. Why is it important for each Civ to vocalise their objectives, and how did you decide which personality to attribute to certain leaders?

The civilizations in Civ 5 were in a little more of a lump. They had weightings and scores based on the things they wanted to do. So if you spawned next to Genghis Khan he would want to take everything over, but he didn’t have an agenda or things that were driving him. Similar with Montezuma, players just knew they would invade often. You also knew that Gandhi would eventually use nukes because he was made to do that.

So one of the big changes we wanted to put in was that every civilization would have a historical agenda, meaning they played a certain way, and we wanted to vocalise that. So when you meet them, in their introduction line you get a sense of the kind of Civ they are. When they give you warning or kudos, we want to indicate [whether] they like you because of their agenda, and that affects the relationship. If you click on a portrait we have a lot more information on there now, [like] where your relationship is sitting, the different values that are attributed to each of the things that affect your relationship. There’s a lot more information, and one of the things that a lot of people asked for in Civ V is that they didn’t have a lot of information in the diplomacy screen. 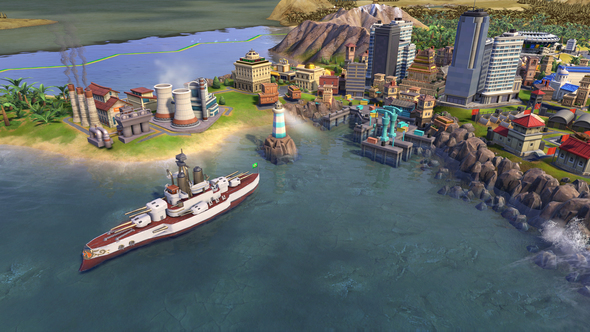 That’s one of the things that agendas allow us to do, give them that personality. But it’s not just that personality because if that was the case, then they would play that way every time. So we also have random agendas from a collection of different ones. You can’t see that until you get your diplomatic visibility higher, so you might have negative modifiers for some unknown reason. You might meet them and they don’t like you and you’re not sure [why], you might see minus ten for unknown reason. So maybe you send a trade route or open an embassy or send spies and suddenly you’ll see, ‘Oh they’re cultured, and you’re playing a military game and that’s why they don’t like you so you go and find someone who’s more military like Cleopatra. It makes for a more interesting game in gauging these AI personalities.

Teddy Roosevelt for example has a historic agenda, he likes peace on his continent, doesn’t like anybody causing trouble. So if I’m playing a culture game, which I usually do – it’s my favourite victory to get – I want his continent. Fine, but Qin of China wants all the wonders, so if you build more wonders than him he’s going to try and take them from you. So if I’m playing a culture game and want wonders, I might goad him into a war: I keep building wonders and eventually he might declare a war on me, which causes Teddy to declare war on him because he’s a troublemaker. I maybe go and take one of his cities with those wonders back and now I’ve used that system and [their] personalities to my benefit.

So it avoids that situation in Civ V where if you play in a combative way with Japan there would be this infinite loop of people denouncing you. Because one leader does, everyone else does too. If everyone has these different objectives, presumably some will want to be your friend if others denounce you?

Sure, there are now plenty of players who appreciate aggressive military. But the denouncements can still happen. There are two types of war, there’s surprise war and eventually if you keep playing you’ll see formal war, which is [when] someone gives you a reason to go to war with them [and] you have a ‘formal war’ option which gives much less of a warmonger penalty. If you declare a surprise war on somebody people will still think you’re a warmonger and you might get denounced for that, unless they’re a military civ. 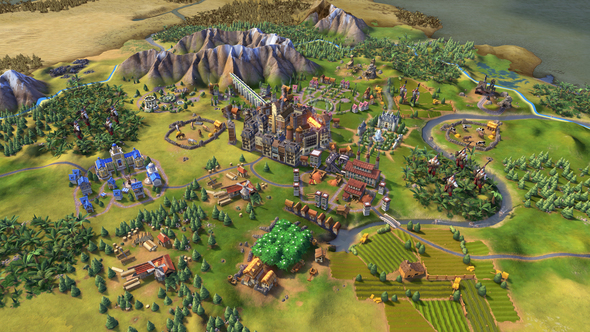 I was one click away from wiping out a Brazilian settler very early on, but I thought better of it.

It scales in the game, so early on warmongering doesn’t matter nearly as much or last as long in the game because it’s a harsh environment.

The team have already teased the potential for modding with this new engine. Can you talk about that in any more detail?

We are going to be talking in more detail about modding further down the road. We haven’t announced when we’re releasing our tools, it’ll probably be soon after release. A lot of the tools will be similar to what we had in Civ V. [Even] if you’re a highly skilled modder, it was extremely difficult to work on leaders, and our elite units in the game, so we’re paying special focus to that. We are bringing mods to multiplayer as well. As usual, a big emphasis on modding.

Do you think there might end up being a situation where you’re catering for a big player base in Civ VI and also a player base who is sticking to Civ V, because maybe they’ve bought all the expansions? Will the team feel the need to maintain both of those games in tandem?

We’re sneaky this time around. Unlike with Civ V’s base game, we brought out all the new systems from Civ V Brave New World with us. I think the only exception is war and congress. Whether it’s the great works system, religion, espionage, all those things have been tuned for Civ VI so they play differently, but we wanted to give Civilization V players the best reason to put up on the shelf and try something new. Because all the new systems in VI is definitely a far cry from where we were on Civ V’s base game. When we released the base game we were worried about the change to one unit per-tile, it’s a huge change and we didn’t want to overwhelm everybody with lots and lots of systems. The fans didn’t necessarily appreciate that when they came off Civ IV which had a lot of content.

Civilization Vi releases October 21. While you wait for that day to come, why not check out the best 4X gamesavailable now, or argue with us over how to rank all the Civilization games in order?