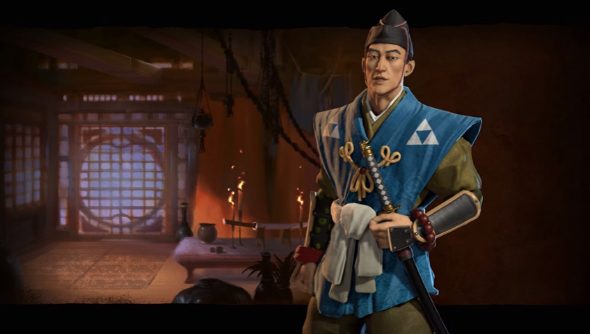 Japan’s great defender against the Mongol invasion, Hojo Tokimune, will be the nation’s chosen leader for October’s Civilization VI release.

Tokimune, known for preventing Kublai Khan’s attempted invasions of northern Kyushu during his thirteenth century rule, and championing the spread of both Zen Buddhism and the way of the Samurai, Bushido.

Of course, as a member of the Hojo clan, he is also recognisable for bearing the originating symbol of the “Triforce”, the Hojo clan’s Kamon “Mitsuuroko” or “three scales”.

Though never actually being appointed Emperor or other official title of ruler, Japan’s shogunate feudal system gave him de facto rule of the country during a period of intense military and naval importance for the tiny island nation against the might of an Asian continent under the Khan’s rule.

After a first failed invasion in 1274, Mongol emissaries continued to be sent to Tokimune asking for his surrender, until eventually after sending them away with no answer for several months, they refused to leave without an answer. So he cut their heads off.

As leader of Japan in Firaxis’ latest 4X grand strategy game, he’ll have a similarly iron fist rule, though no supernatural powers to summon kamikaze (divine winds) which destroyed the second Mongol invasion fleet in 1281.

Japan’s specialist unit will, of course, be the Bushi, or Samurai, who played a pivotal role in the defense of Japan from the Mongols. It’s not all about warfare, however, as Japan’s more recent de-militarised history has seen them rise as one of the world’s foremost economic powers.

As a result, the unique building Tokimune can construct is an Electronics Factory, as the first built by Sony in 1946 was the beginning of a new age in global development.

You can play as Tokimune and the kingdom of the rising sun on October 21, here’s another history lesson if all of that wasn’t enough to sate your appetite: