As the ship of your civilisation rides the ups and downs that are the waves of fortune and misfortune in Civilization VI: Rise and Fall, you may find yourself struggling to keep tabs on all the new features. After all, Civ VI already had a lot of buttons to press and knobs to turn before Rise and Fall added more into the mix. Luckily, we have put together this guide that breaks down all the new stuff and how best to use it to your advantage.

We cover the biggest and more complicated new features in this Civ 6 Rise and Fall guide. If you’re experiencing difficulty getting to grips with Loyalty, Dark Ages, Golden Ages, and your Era Score, we’ve got tips to help you out. We’ll also cover how to effectively install a Governor into a city, and the benefits each one provides.

Choose the right tactics and achieve swift victory in the best strategy games available on PC.

You’ll also probably need a helping hand on how to deal with Emergencies, and how to set up the perfect alliance. So before you start up your new campaign, be sure to peruse and absorb our notes to ensure yourself the best chance of a flawless victory. Well, a fine victory at least, we wouldn’t want to over-promise. 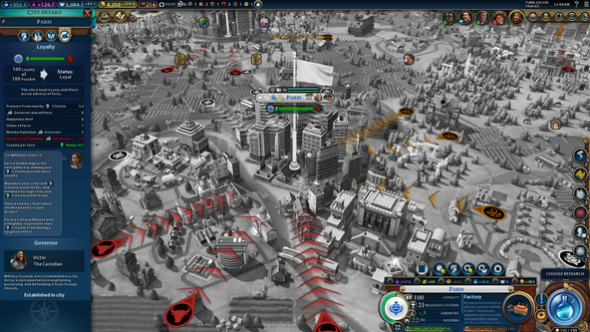 Loyalty is the most impactful new factor you will have to consider. At the worst of times, it can cause cities to break free from your clutches. At the best of times, it can allow you to take over enemy cities without ever firing a shot. Keep an eye on the status bar for all of your cities and nearby enemy cities. A green arrow next to your civ’s emblem means loyalty is rising per turn. A red arrow means it is falling per turn, and no arrow at all means it is stabilized. If a city is losing loyalty, you can see how many turns are left before a rebellion happens by hovering your cursor over the city name.

The best way to turn around a city with flagging loyalty is to station a governor there (more on them below). It also helps to found new cities within nine tiles of as many existing loyal cities as possible. Conversely, the more loyal cities of a rival civ there are within those nine tiles, the more disloyal your cities will be. When you have a settler selected, an overlay will show you which tiles would have negative loyalty per turn if you founded a city there. Best to avoid them if you can.

If a city becomes disloyal enough to break away as a Free City then you have a couple of options. It is possible to win it back by increasing loyalty pressure on it (such as by stationing Amani the Diplomat in a nearby city). But you also have the option to simply bring it back into the fold by conquering it with your military. Free Cities do not count as City-States, so, for instance, Teddy Roosevelt’s agenda makes him dislike those who conquer City-States on his continent will not cause him to get uppity about putting down rebellious Free Cities. 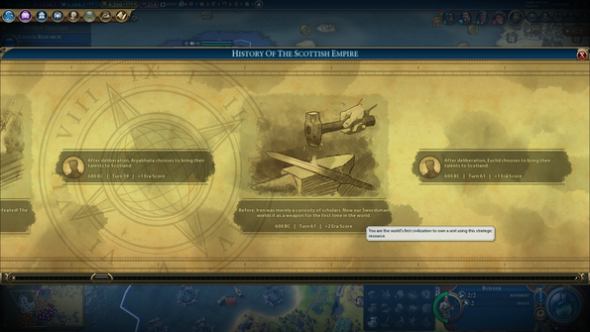 The flagship features of this expansion are Dark Ages and Golden Ages as they change how you play by causing your citizens to exert less or more loyalty pressure on nearby cities, respectively. A city that had no loyalty issues at all in a Normal or Golden Age might suddenly be on the brink of rebellion in a Dark Age – especially if you are bordering a civ in a Golden Age as their citizens will be exerting additional pressure.

Earning Era Score is not especially well spelled-out, unfortunately. And if you are about to fall into a Dark Age, it can be tricky to figure out what your options are to pull out of the nosedive. Generally, the first time your civilisation does something significant, you get Era Score. Being the first in the world to do it gives you even more.

Examples include the following:

Falling into a Dark Age is not all bad, though. You unlock Dark Age policy cards that offer some sort of trade-off, and can actually be among the strongest in the game. Isolationism, for example, gives you bonus gold and food for domestic trade routes – at the cost of not being able to found new cities. If you are playing more tall than wide, this is a fantastic card and you may even miss it when your Dark Age is over. Dark Age dedications also give you new ways to earn Era Score, making it much easier to avoid another Dark Age if you have just been through one.

Going into a Dark Age deliberately can be a perfectly valid strategy, too. Dark Age policy cards may benefit your immediate goals, and going directly from a Dark Age to a Golden Age results in a Heroic Age, granting you even more bonuses than a normal Golden Age. 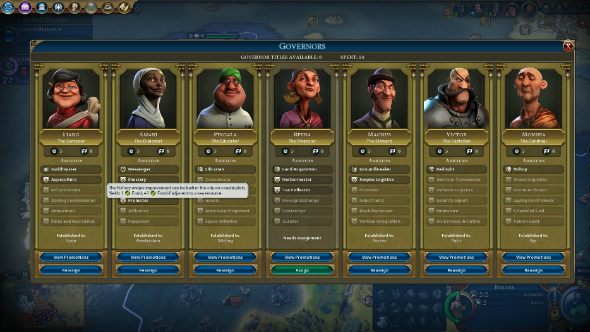 Used correctly, governors are absolutely game-changing and can open up totally new playstyles. Here are our favourite ways to use each of them:

Liang the Surveyor: Her Aquaculture promotion can be unlocked very early on, allowing you to spam Fisheries on any water tile and turn even the most isolated islands into booming metropolises. Fisheries do not give any benefit once you have maxed out the size of a city, so you will have to find something for all those citizens to do – such as constructing districts and buildings that grant citizen slots within their tiles. Liang can help with this too, as she grants a production bonus to all of the above.

Amani the Diplomat: Amani has one job more important than all the rest: city-flipping. Her Emissary promotion, combined with certain district projects and, later on, spy activity can be a great way to force enemy cities’ loyalty low enough to take them over bloodlessly. Her Prestige and Promoter abilities can also be used defensively to shore up loyalty on your own borders, making her very useful in a Dark Age.

Pingala the Educator: Pingala is all about supercharging your science and culture, up to and including being able to build nukes and spaceships faster. His Grants promotion can also be extremely powerful, allowing you to earn Great People twice as fast. Station him in a city with as many Great-Person-generating districts as possible to get the most out of the ability.

Reyna the Financier: You can put her to best use early on by simply placing her in an area where you need to grab a lot of tiles quickly, letting her Land Acquisition promotion do its work. Later on, she becomes all about earning you cash. And, as a bonus, she can also give you something to spend it all on with the Contractor promotion, unlocking the potent ability to purchase districts outright.

Magnus the Steward: Magnus is your go-to guy for growth and industry – especially if you enjoy a slash-and-burn style of urban development. He pairs really well with civs, wonders, and policy cards that grant additional charges to builders. But his biggest perk might be his Black Marketeer promotion, allowing you to build units that normally require a strategic resource in his city without the need for those resources. After all, we have all had those unlucky starts where there is no iron on our entire continent and nobody that has any wants to trade with us.

Victor the Castellan: If you have a border city that comes under attack a lot, Victor will make your enemies think twice. Particularly his Embrasure promotion – which allows his city to make two ranged attacks per turn – gives you the ability to defend against invasion with only a token force. Barbarians hate him!

Moksha the Cardinal: He will not do much for you if you are not going for a Religious Victory. But, if you are, Moksha is your secret weapon. Placing him closest to the frontlines in your current crusade will not only make his city incredibly difficult to convert, but also give your religious units pushing out from it excellent bonuses and a great place to fall back to if needed.

Generally, we like to hire all the available governors before we start handing out promotions – especially if we are expanding quickly. Seven governors means seven cities you will rarely have to worry about in terms of loyalty since they provide strong bonuses to it even at first level. And that is pretty valuable by itself, even taking their unique abilities off the table. 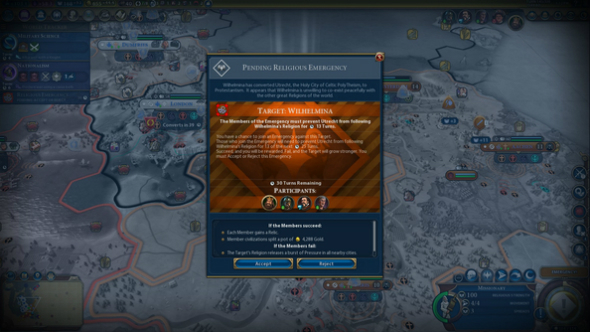 An Emergency triggers when you or some other civ has overstepped their bounds a bit. Triggers we have encountered include converting another religion’s Holy City to your religion and being the first person to drop a nuke. A number of civs will be given a choice to participate against the aggressor. If the coalition wins, each member will get a modest reward. If the aggressor holds off the coalition then they get a much larger reward. Because of this, it can sometimes make sense to trigger a emergency on purpose if you are confident you can weather the storm.

If you are the target of an emergency, you will most likely have to be defending a specific city for a certain amount of time. If it is a military emergency, deploying Victor to the target city is probably wise. If it is a religious emergency, Moksha is a great choice. We have seen it be pretty hit-or-miss when it comes to how much effort the coalition members put into stopping us, but it is generally better to be over-prepared than taken by surprise.

If you are on the coalition side, the same possibility of half-heartedness from the AI means you should treat it like a solo quest or choose not to participate at all. If you do get some help from your friends, all the better. But it does not happen enough to rely on it. Bring out all the big guns and do not sit around. Time is on the side of the civ who triggered the emergency as all they have to do is run out a timer without letting you accomplish the objective, so you have got to get in their face quickly or you might as well not attempt it at all. 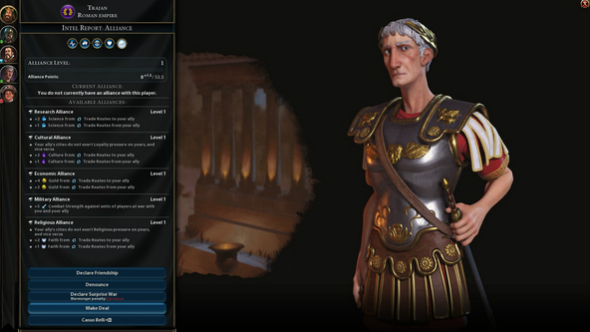 Since each alliance now has a theme (like religion or commerce), it is best to pick your most reliable friend and create an alliance with them based on the resource most important to your intended victory type. Since most alliance types also rely on trade routes between the allied civs to generate these resources, it is best to choose a strong ally who is close by, can trade with you, and does not have any agendas that would eventually cause you to step on their toes. If pure defense is your concern, the military alliance might be the best choice – but keep in mind that you only get its added benefits when fighting someone you and your ally are both at war with. When in doubt, economic alliances can benefit almost any victory type.

That should get you about up to speed on the new mechanics in Rise and Fall. Some things you will just have to figure out through trial and error – like which actions might start an Emergency with the target painted on you, or the tonnes of small things you can do to earn Era Score. Keep an eye on your loyalty and use your governors wisely, though, and you should be able to stand the test of time.