For me, a 4X is about conceiving and executing The Plan. These games offer many systems, which can be manipulated by a range of factions, all of which informs said Plan. Picking a faction is a statement of intent: to achieve a certain victory in a certain way. Civilization has always been very good at that bit, but is sometimes less good at challenging you during the execution. Sid Meier has said games should be a series of interesting choices, but in Civ, it can feel like the most interesting choice you make comes before the game even starts.

In Gathering Storm, this trend reaches its highest expression. The new civs are more intricate and distinctive than ever, and have kept me ‘one more turning’ as I see The Plan to completion. But the new systems don’t factor into The Plan all that much.

For the most part, natural disasters are pure irritation. They’ll miss your civilisation at first, traumatising vast tracts of empty land, but as you expand, they’re common enough to become a real nuisance. They can kill your citizens and damage your infrastructure, forcing you to put The Plan on hold while you repair districts or make builders, and they have an annoying habit of recurring in the same place. In Gathering Storm, lightning does strike twice.

You can protect yourself with dams and – much later – flood barriers, but there’s nothing you can do about droughts or storms. There are no interesting choices to be had here, and not much fun, either. Adjusting disaster intensity in the game setup is a welcome option, then, but it feels like an acknowledgement that one of this expansion’s main features isn’t for everyone.

The mechanic becomes more interesting when you get the chance to make matters worse. Your carbon emissions will exacerbate many disasters and create new ones, such as rising sea levels. These looming problems raise a new question – whether to burn coal – during industrialisation, and once you suffer a ‘crippling blizzard’ that kills 20 of your citizens and damages or outright removes dozens of improvements, you’ll take that question seriously.

But even if you opt out, it’s possible to get battered by apocalyptic hurricanes or swallowed by the sea because someone else is running a dozen coal plants. There’s an exciting sense of tense escalation to climate change, but also of inevitability – even when I tried to keep my own emissions down, some other civ would always fart them out.

This can be frustrating, and though there are solutions, none are perfect. You can kick off at your environmentally-unfriendly peers, of course. But having captured their polluting power plants, the option to decommission them doesn’t exist, as far as I can see – the best you can do is convert them to low-carbon nuclear power, which is only possible if you have the technology. 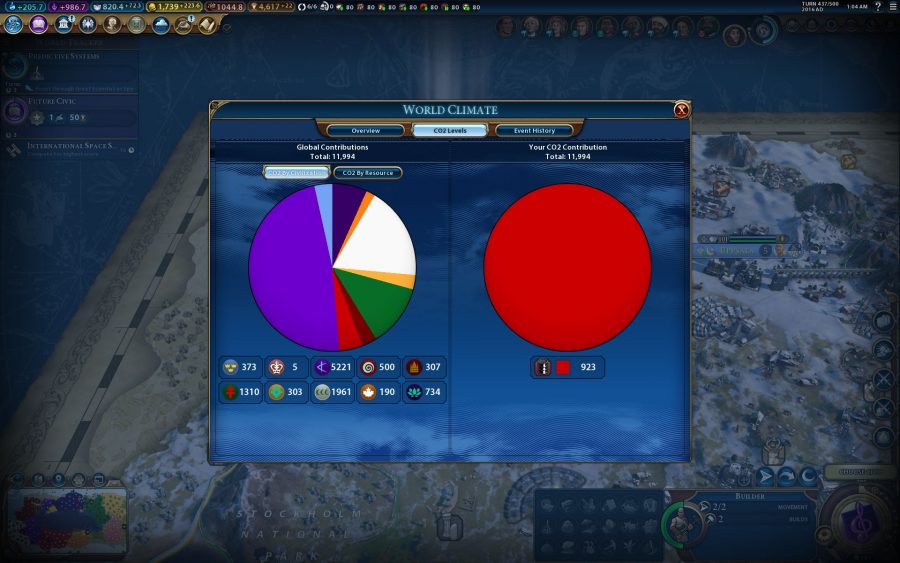 The returning World Congress can pass environmental treaties, but it can’t be relied upon. When it meets, you can vote on two proposals that’ll change the game until the next session. Each has a positive and negative outcome – a player could get another trade route, or suffer a total trade embargo – and you can specify who will be affected by it. Unlike in Civ V, however, there’s no way to become host of the Congress, or to otherwise set its agenda. You have more control over the outcome of the proposals that come before it, but none over what those proposals will be.

You can't factor the World Congress into the Plan, only seize opportunities ad hoc

This is a shame. I rarely felt so cunning in Civ V as I did when I chose a proposal that dovetailed with The Plan, or screwed over a rival, and got it passed. In Gathering Storm, such proposals will crop up, but they’ll do so at random. When it comes to environmental treaties, the AI will vote in its interest: one such vote ended with clean(ish) nuclear power getting banned because most civs hadn’t developed it yet.

The Congress is great when it works. As Eleanor of Aquitaine – a true Civ innovation, as the first leader to serve two civs – I had a belligerent Suleiman on my borders. A proposal offered the chance to increase a civ’s city growth rate but drop their city loyalty, and I cashed in a lot of diplomatic favour – the new currency of the World Congress – to ensure Suleiman won it. Together with Eleanor’s leader ability, the drop in loyalty led to a couple of his cities rebelling and joining me, which felt suitably Machiavellian (a feeling somewhat undermined when Suleiman’s AI, not realising the implications, voted for the proposal himself). It was a cool moment and made me wish I’d had some way to engineer it, but as it is, you can’t factor the World Congress into The Plan. You can only seize its opportunities ad hoc. 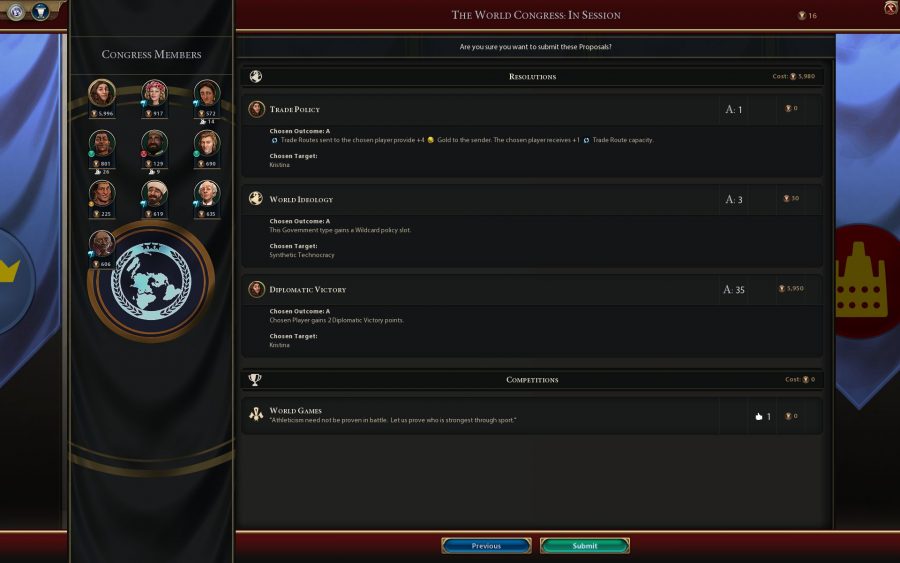 I’m unsure about the new diplomatic victory for similar reasons. You need ten victory points to claim it, with regular motions in the World Congress awarding two, and occasional competitions or emergencies (such as aid requests) awarding one. As Sweden, I was on the cusp of victory on two occasions, but was frustrated by the rest of the world pooling their favour to stop me. If you lose a vote, the favour you spent on it is refunded, so if you’re producing more than everyone else you should eventually overwhelm them – in theory.

In most games - all three of those that I saw to the Information Era or beyond - the AI will warm the planet no matter what you do. It's just a question of how quickly it happens, and how exposed you are when it does.

Trouble is, as you add more votes to a motion, the price to do so will rise, so while you can have more favour than the rest of the world combined, that doesn’t mean you have more votes. I won the diplomatic victory on my third chance, helped enormously by two very tempting proposals on the same agenda that split the favour of my opponents. Again, that’s a factor that was beyond my control.

The emergencies system has been folded into the World Congress, which is a sensible place for it, but if you like a fight, you probably won’t welcome the results. As Kupe I needed Suleiman’s land, and intended to play peacefully after I got it – honest – but the rest of the world made this difficult by passing military emergency motions against me twice, one of which punished a conquest I’d made before the Congress had even convened. In another game, Matthias of Hungary called an emergency on me for taking Calais dozens of turns after I’d not only already done so, but had taken France out entirely and moved on to Greece. 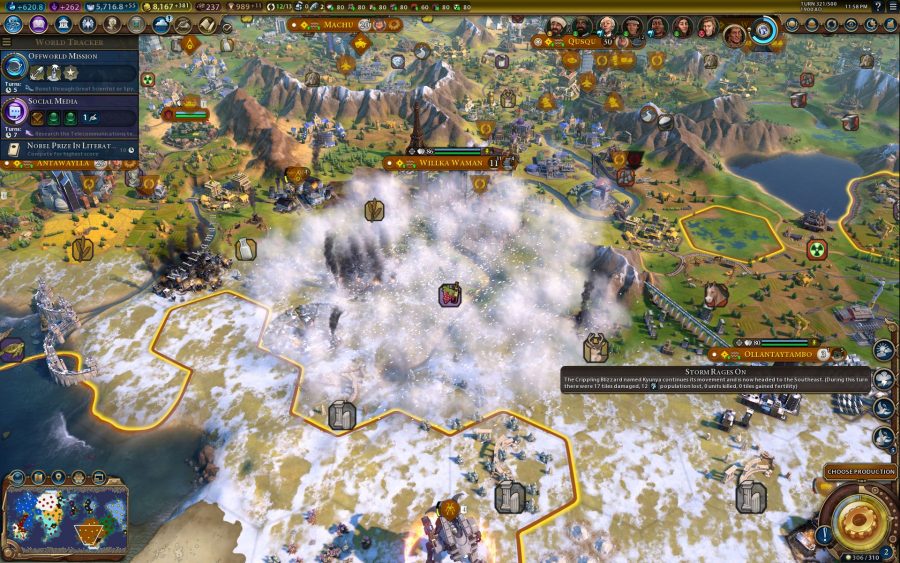 All this leads me to make an odd declaration: if you’re a warmonger, you have my sympathy. Gathering Storm will be a tough time for you. You’re essentially required to amass as much diplomatic favour as possible to vote these emergencies down, and sometimes you’ll manage it, but sometimes it’ll be impossible, as half the world will dump all their favour on you (it seems the size of your army is a deterrent). Other civs have a long and vengeful memory, even on behalf of third parties, and even if you only want to do a little bit of killing. It feels like every city capture can potentially trigger a global pile-on.

The new diplomatic victory requires a massive quantity of favour. The Future Civic and carbon recapture project give you new sources of this in the late-game, obliging aspiring diplomats to keep culture up and spam carbon recapture in all cities that are capable of it. Maintaining alliances and city-state suzerainties provides a regular trickle, but is subject to the machinations of others.

On the flipside, defensive wars feel much fairer. Diplomatic misbehaviour generates grievances, which are balanced between civs and thus give you credit to draw on if someone else catapulted the first boulder. After Matthias backstabbed me in my Inca game (seriously: Suleiman and Matthias are up there with Alexander for the ‘Civ’s biggest dickhead’ award), I was able to capture and keep one of his cities with my reputation intact. He still tried to declare an emergency on me – ages later – but the rest of the world was able to recognise I’d done nothing wrong.

And yet it seems Gathering Storm has done little else to address one of the Civ community’s perennial complaints. The AI still issues odd attack orders in warfare, and attaches odd value to commodities in diplomacy. This has produced some frankly ridiculous requests: ‘Can I have all your Great Works, and, I dunno, a city so you can join me in a joint war against my neighbour? I’ll give you a luxury you already have and a bit of gold per turn when you’re already swimming in money’. 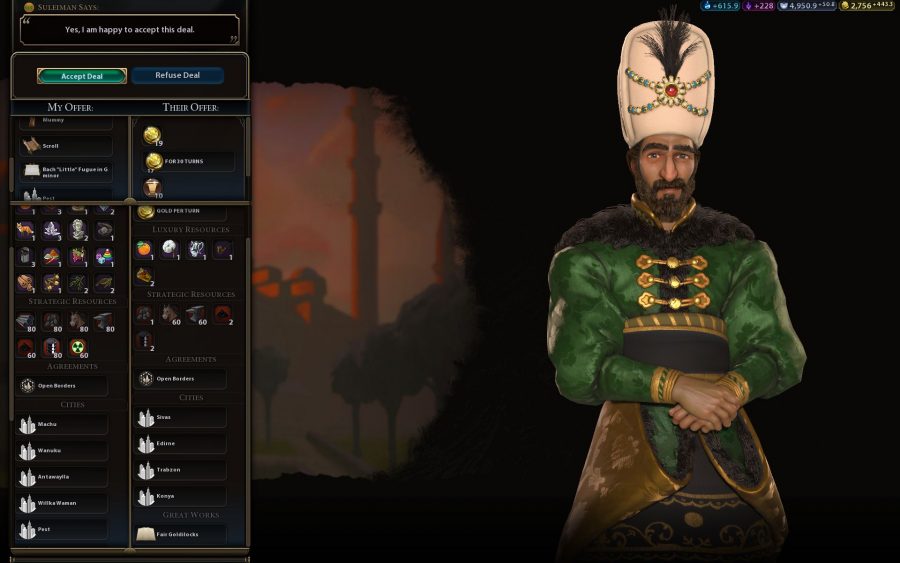 As in Civ V, the AI seems to value strategic resources equally, which is absurd when they wax and wane in value. I’ve got away with ridiculous counter-proposals, such as talking someone down from 20 Oil to 12 Iron. However, the new, more granular approach to strategic resources is an excellent background change that poses some interesting questions: Do you want to power your cities, or maintain a modern military? Will you try to do both through conquest or diplomacy, or can you afford to wait while you tech up to renewable power? It’s basic strategy game stuff, but it’s more compelling in many ways than the big headline features.

Kristina gives an unblinking Hard Stare when rejected in diplomacy

But where Gathering Storm really shines is in the new civs, which are brilliant. Firaxis has taken the rare step of weakening some in one way but strengthening them in another, defining their gameplay more sharply: Mali’s mines yield more gold but less production than anyone else’s, and their Suguba discounts gold and faith prices, so you’ll buy things rather than make them. The Maori can’t generate great writers and lose the amphitheatre’s Great Work slots, but get more culture, faith, and tourism from unimproved land – somehow, they’re conservationists in a genre part-named for exploitation. Dido can resurrect the old strategy of forward-settling, while Matthias turns a system that had been largely ignored – levying city-state troops – into a deadly weapon. I could go on. 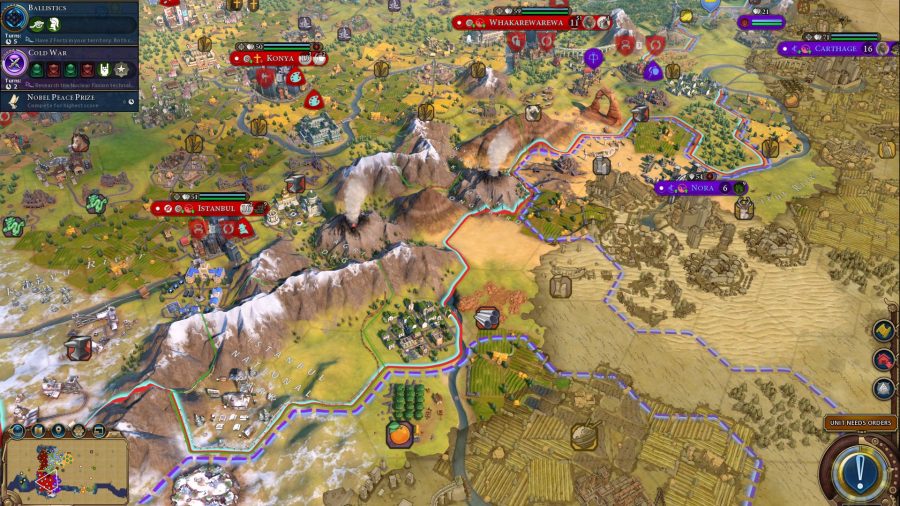 Aesthetic design is also outstanding. Reject a diplomatic proposal from Kristina, and she’ll give you an unblinking Hard Stare while huffily flipping a page of her book with her finger. Accept one from Mansa Musa and he’ll give a delicious sigh of deep contentment. I include the Maori in every game to enjoy one of their songs: a gentle tribal hymn as soothing as a zephyr blowing in from the sea.

Whenever such breezy metaphors don’t whip themselves up into unavoidable hurricanes that massacre my people, Gathering Storm can be great fun. The new civs breathe life into systems both new and old, adding greatly to Civ’s replayability. And while it’s nice to have the World Congress back, I hope that a patch tunes its hostility to Domination players, and lets us set its agenda somehow. Until then, while it and the natural disasters don’t actively detract from the experience, they don’t add as much as they could.

The World Congress and climate change mirror real-life in that they're partly beyond your control. This makes them hard to factor into your schemes, but the new civs are among the series' best and most novel.