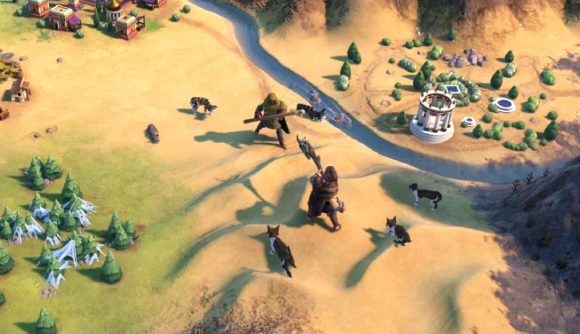 As excited as we are for all of the civ balance changes and new units introduced in yesterday’s Civ 6 patch, there’s one new feature that’s scratched a particular itch. We can now pet the dog in Civilization 6.

‘Which dog?!’ I hear you cry – an early game unit known as the scout has a canine companion that travels with him as he explores the map. Scouts are pretty weak in combat situations, but they’ve got high movement and sight range values. This makes them useful for exploring the map and discovering other Civ 6 civilisations and places to settle.

The April patch has now introduced a new ‘Pet the Dog’ button on the Scout’s unit ability bar, as illustrated by this video on Reddit. If you click it, a new animation will trigger where the human turns and pets his faithful doggo. But wait, it gets better! Or worse, depending on which side of the battle lines you sit – it turns out you’re not allowed to pet the cat.

‘Which Cat!?’ all you feline stans roar. Well, a while ago Firaxis ran a special promotion where, if you signed up for a 2K account, you could unlock a new unique skin for the scout unit that replaced the dog with several cats. Even though the new ‘pet’ button is still there, with the alternate skin it is disabled, as shown in this Reddit thread:

So there you go. You can pet the dog, but not the cats. If you ask me, all pets are rubbish anyway so this is all nonsense. The April balance patch was the final update released as part of the New Frontier season pass.

Currently, the developers have not confirmed what’s coming next for the 4X strategy game but we’re hoping to return next week with a more in-depth analysis as to what this patch has done for Civ 6’s health.