When we play co-op games, generally what we’re doing is the same thing in unison with another player in order to achieve the same goal together. We’re both shooting at the same boss, or both breaking into a bank to steal money. Clandestine, a stealth game from Logic Artists, defines its approach as collaborative rather than co-operative. It features two playable characters – a field agent spy and a hacker – and both are completely reliant on each other to progress.

Katya is the spy: a tough, red-haired agent fresh from the Black Widow mould, and playing as her is a traditional third-person stealth experience. It’s very much like the earlier Splinter Cell games, with slow and deliberate movements, and a snap-to cover system. She’s equipped with a variety of gadgets (all suitably ‘retro’ for the 1996 setting), a silenced pistol that can chamber lethal and non-lethal rounds, and her fists (in as much as anyone is ‘equipped’ with fists…) that are used for a very brutal set of bone-snapping takedown moves. As capable as Katya is, though, there’s a slight clunkiness to her: takedowns are slow and shooting is sluggish, so being spotted can lead to utter disaster. 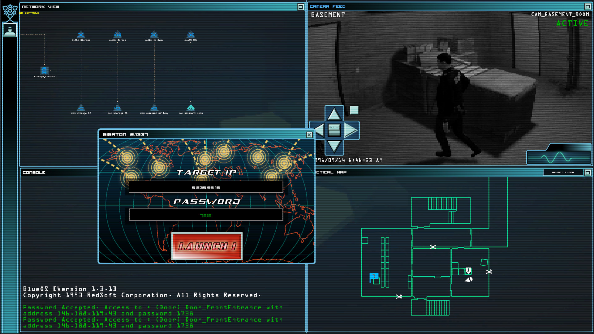 This isn’t as problematic as it might be, though, thanks to our other new pal Martin. He’s the hacker: the Q-like character sat in a van parked in a nearby alley, starting at flickering green screens and keeping the spy constantly updated on what to avoid. But since this is a co-op game, Martin isn’t just a scripted voiceover telling Katya where to go. He’s another player, who’s playing what is essentially an entirely different game. As the hacker, you have four different screens to monitor: a set of command prompts, a CCTV feed, a node map of the server you’re hacked into, and a map of Katya’s location. Using these tools, you can help Katya overcome her weaknesses, and guide her to victory.Or a bloody death followed by a set of expletive-laden recriminations.

Whilst playing as the spy is relatively simple if you’ve encountered a stealth game before, the hacker feels like a notably fresh experience. It’s mentally taxing, as you’re constantly looking from screen to screen, discovering where enemies are with CCTV cameras, tagging them so the spy can see their movements through walls, and retrieving data for them. With their surveillance of the whole map, Martin can alert Katya to how many guards are on the way: if there’s just one, they can signal the spy that it’s safe to do one of the lengthy takedown moves. If there’s more, it’s best to keep quiet and run the route that the hacker can see is guard-free. 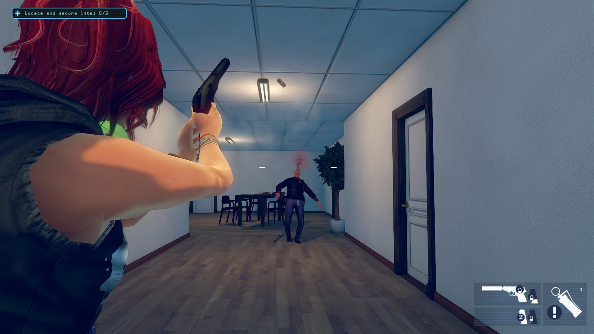 Not only does the hacker need to always be on call to aid the spy, but they need to be constantly monitoring the field agent’s progress and thinking ahead. If the player is controlling a CCTV camera the enemy security team cannot see its feed. This means every time Katya walks into a camera’s view, then Martin already needs to be controlling it to prevent alarms being raised. It makes playing the hacker as intensive and active as the spy, even though they’re not actively in harm’s way.

They do have their own quick-reaction responsibilities though. Should a spy need to retrieve something from an enemy network – a password perhaps – the hacker will need to work their way through a series of nodes, much like in Deus Ex: Human Revolution. As they navigate the net in search of the correct one, the enemy admin can be seen patrolling the nodes, leading to an almost Pac-man style game of avoiding a dot on a maze grid. And avoiding that admin is important: should you be discovered and kicked from the system, any door passwords you retrieved will be reset, meaning a quick exfiltration for Katya is now impossible since everything will require decrypting all over again.

Working in unison, the spy and the hacker are a force. As the spy approaches a locked door, the hacker should already be two moves ahead and have hacked the system and retrieved the password. When sneaking through heavily patrolled regions, the spy can throw a pager across the room and have the hacker call it to act as a distraction. Almost every element of the game requires both players to be engaging with each other; collaborating, rather than cooperating. It’s the sort of thing that demands both a headset and a friend. They’re not strictly mandatory – you can play public games and use text-chat to communicate – but by Logic’s own admission this is far more stressful. The idea is to play with a buddy, essentially roleplaying Ethan and Luther from Mission: Impossible. 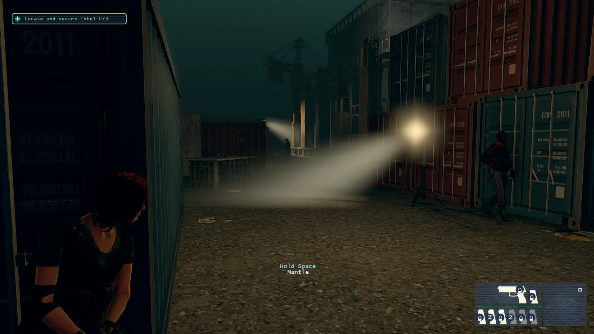 Clandestine is difficult and unforgiving; slip ups lead to disaster, and because of its hardcore stealth roots you can’t just shoot your way out of trouble. Raising alarms isn’t the end of the world though, and if you can work together to slip back into the shadows Clandestine won’t punish you for it at all. However, the bigger your ‘footprint’ (how many corpses, bullet cases, witnesses, and other general evidence you leave behind), the more chance that the enemy will beef up security for future missions and make your job increasingly challenging.

But overcoming that challenge is a genuine thrill, and despite areas of the game feeling like a decade-old Splinter Cell game, it is a brave and bold concept that simply works. It’s for a very specific type of player: one with intense patience for both the game’s stealth systems and another player’s actions. Should you be that person then Clandestine is absolutely something worth infiltrating. You can grab it on Steam Early Access right now, where you can play the prologue along with some challenge maps, or hang on for the narrative-heavy campaign – featuring RPG-like character-led sections between missions – when it launches this autumn.