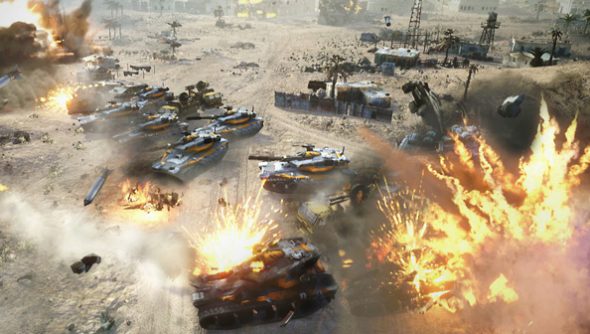 You might remember Samuel Bass as lead designer of Command & Conquer 4 – the last game set in the Tiberium universe. Back then, he was selling the merits of accessible, objective-based multiplayer, and a single player campaign driven by AI rather than scripting. C&C4 wasn’t particularly well received, however, and today Bass is in charge of rebooting the once-beloved series. And boy, has he changed his tune.

“When our community installs the game and they start to play it – the veterans, the people who’ve been with C&C since ‘95 – all I really want from them is to go, ‘Holy crap, this is Command and Conquer’,” Bass told Game Informer.

“The first thing we said was, we need to kind of wash the stain of C&C4 away. And to do that you really have to get back to your roots – get back to what it was that made your fans your fans in the first place.”

And what exactly was it that made fans fans? Senior technical game designer Jeremy Townsend thinks he knows:

“To me the roots of Command & Conquer are always about base-building that doesn’t feel like a chore, harvesting that doesn’t require your full attention, and a focus on fast action and lots of viable strategies in the actual combat,” he explained.

I actually remember Generals as a break from form for C&C – one that stripped back base-building in favour of Chinese hackers and the perpetual race for WMDs. It moved far too quickly for me to keep up.

You can sign up for the beta of the new Command & Conquer on the official site. Do you think you have an idea of what makes the series tick?