I last played a build of Company of Heroes 2 back at 2012’s Eurogamer Expo and only had a short period of time with a single, tightly-scripted skirmish. Now, I’ve had the opportunity to dive into the forthcoming Theater of War expansion — eighteen scenarios, plus a co-op mode alongside a range of tactical challenges — and can confirm that first, it’s a substantial expansion (and quite a lot to offer as a free pre-order bonus).

Second, I am still a mediocre tactician who cannot be trusted with flamethrowers.

Theatre of War is the first expansion to be announced for the game, and it’s already being offered as a bonus to those who pre-ordered. The game’s director, Quinn Duffy, describes it as eighteen more scenarios, with the possibility of co-op play. It also features challenges, he explains: “[Challenges are] an in-depth examination of tactics and mechanics, such as indirect fire challenges or an officer assassination challenge.”

In other words, Theatre of War isn’t just a few extra maps, it’s an opportunity for gamers to play Company of Heroes 2 in some new and very different ways.

Picking one of these challenges, I found myself fighting off ever larger waves of Nazis with just a handful of units and mere seconds to regroup between each wave. While this was just one of several scenarios I might have tried, Duffy explains that there is still much more to come. His vision of this sequel is of a game that is enormously expandable, a game with “a long tail” that justifies its lengthy development time and continues to deliver long after release.

And Duffy is all for taking time making a game if it’s going to pay off in the long run, rather than crunching before an ever-approaching release date, one eye on the clock: “I think that’s one of the problems with game development in general,” he says. “And it’s not actually about the publishers. I think it’s about Wall Street, the pressure they put on everybody. It’s short-term thinking and it’s harmful to the creative process to be focusing quarterly development.” Quality takes time, he says, reminding me that it’s been seven years since the last Company of Heroes, and it will pay off in the end. “We’re in it for the long haul.” 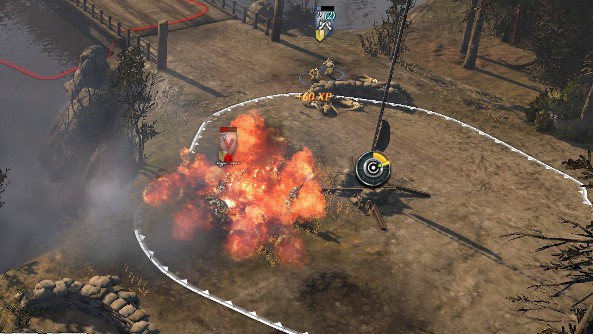 Designer Jason Lee reveals that this extended development was largely uninterrupted by the collapse of Relic’s publisher THQ at the end of last year. While it did throw them into the unknown, Lee says it wasn’t a difficult time and they knew someone would want to snap them up. “There was a general sense at Relic, more like an uncertainty, of wondering who was going to be our owner,” he says. “Maybe it was a confidence, as we knew we were going to be bought up by somebody, but we just didn’t know who and there were a lot of rumours: It was going to Warner Brothers, it was going to be EA.” But there was no fear that anybody was going to lose their fears or that the game would be abandoned.

A small change, a big impact

Having played more of Company of Heroes 2, I have to say that implementing a proper line-of-sight mechanic really changes everything. The first Company of Heroes was already a game of movement, of flanking tactics, of using one unit to suppress an enemy while another dashed forward. Now, with the inclusion of TrueSight there’s the possibility for hiding anti-tank guns just around corners, for using spotters to direct fire, even for turning a battle around with a smoke grenade. 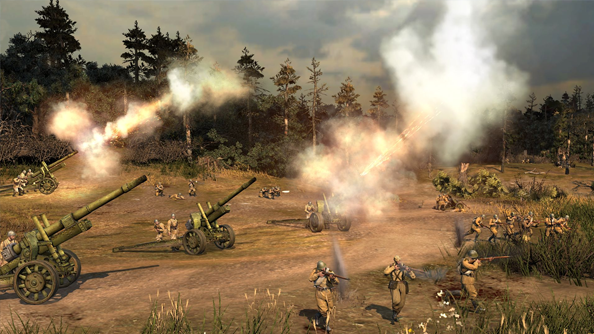 So you can’t hit what you can’t see, right? Wrong. It turns out that you can hit all sorts of things by tossing a grenade over a wall, by sweeping your flamethrower over the undergrowth, or by ordering artillery and mortar strikes on a unit’s last known position. TrueSight makes concealed positions viable, and it opens up possibilities for all sorts of ambushes, but it certainly won’t make you bulletproof. All this means the sequel further emphasizes battlefield tactics in ways that few other real-time strategy game have.

“This is what defines the series,” says Lee, who tells me that Relic’s games were always supposed to be about tactics, not build queues or resource management. “With, say, Starcraft, I would say 60%, 65% of the game revolves around managing your economy. Whereas with Company of Heroes, we didn’t want players to even think about the economy in that way.”

Company of Heroes 2 still keeps many of those mechanics that distinguished the original, such as making armoured units vulnerable from the rear and giving you the chance to upgrade squad weaponry or seize abandoned equipment, but Lee explains that Relic have been busy changing many of the game’s core systems. Armour and penetration are now calculated differently, while friendly fire is now a serious consideration. Those flamethrowers are dangerous weapons in close quarters, while an off-target mortar round could spell disaster. “Friendly fire’s something we’re keeping an eye on,” Lee says, “and we don’t want to ruin the experience.”

Those flamethrowers are also particularly effective against buildings, Lee adds, and can be a great way to shift enemy troops from inside them. Buildings keep burning and can quickly collapse upon those who don’t make a swift exit. 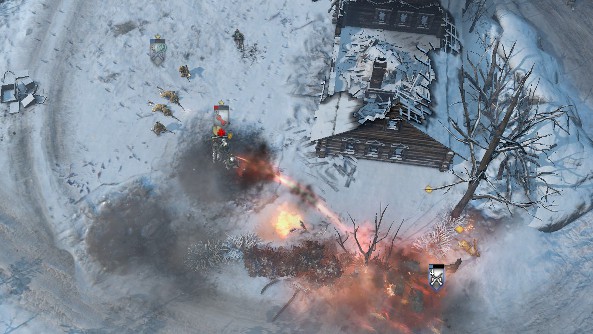 With less than two until release, Relic are very pleased with what they’ve produced. After building their TrueSight and ColdTech systems, they have a more dynamic battlefield and they have much more for their commanders to consider. They’re also pleased with the look of the game which, while still recognisably Company of Heroes, is sharper and often more spectacular.

The original stretched some PCs to their limits, but this time they believe the sequel should run quite comfortably on a mid or even low-end machine. “The renderer’s been redone,” Duffy says. “The models themselves are higher resolution, the textures are higher resolution, we’re putting out more polygons, but I think a lot of it is in the lighting engine and the rendering.”

Even the sound has been given a thorough going over. Lee takes a moment to tell me how Relic’s sound designer spent time not only recording the noise of weapons firing, but recording these noises from many different distances in order to give the combat a real sense of scale.

Company of Heroes 2 looks like a very promising sequel, one that will both retain everything that made the first such a success, but also build upon it with clever additions and smarter game mechanics. It could well be one of the most exciting releases of the year, so be sure to keep your scope trained on this one.