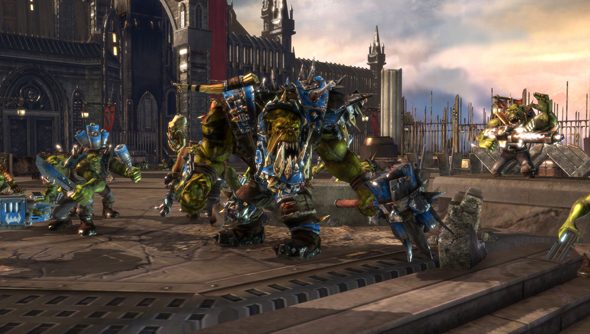 Long before the modern Relic strategy game was conceived, there were people like me trying to play every RTS like it was Company of Heroes – bundling troops into buildings; meandering in a fashion that StarCraft pros would balk at; treating each unit not as a disposable pawn but a character to be guided carefully through the map.

The latest Humble Weekly Bundle is a celebration of the games that finally allowed us to play that way: CoH, Dawn of War II and more for pennies.

You can pay whatever you like so long as it tops a dollar, and split the cash between Relic, Humble and their chosen charities – Arts Umbrella, War Child UK, SpecialEffect and WDC.

At minimum expense you’ll get Company of Heroes, the standalone Western Front Armies: Oberkommando West, and both Dawn of Wars – minus their expansions.

Pay above the average, which is currently a little over $6, and you’ll also get Company of Heroes 2, Western Front Armies: US Forces, Dawn of War II: Retribution, and Space Marine.

And for $15, you can get the brutal Company of Heroes 2: Ardennes Assault campaign with turn-based strategic map our Fraser reviewed very, very favourably back in November.

“As the three different US companies I controlled moved from battle to battle across Belgium, becoming smaller and smaller, I started to wonder if I could even win this war,” he wrote at the time. “It’s a campaign with weight and tension, and subsequently, it’s great.”

All the games are Windows-only and come as Steam keys. Think you’ll bag a bundle by Saturday, June 6th?