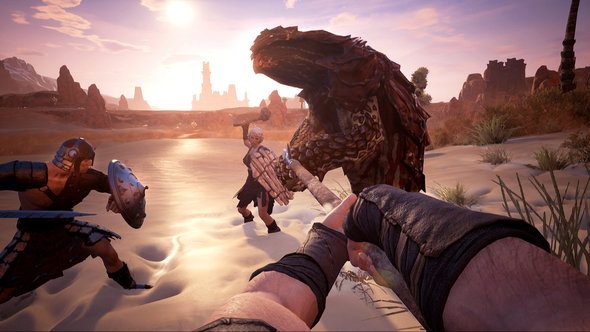 The latest game from German purveyors of fantasy adventures, Funcom, has just been patched. However, it isn’t all good news and many players are finding themselves broken on the wheel of pain in Conan Exiles. The game itself is something of a spiritual successor to the studio’s 2008 MMO ‘Age of Conan’ and marries the latter’s high-fantasy adventuring with the crafting and building of the modern open-world survival genre.

For a slightly more polished experience, check out our list of the best survival games on PC.

Unfortunately, despite fixing a whole host of known bugs, the patch has left players unable to refill their waterskin at nearby rivers. This creates a rather large problem, especially given the game’s focus on survival in the vast wastelands that make up the Conan setting. Having said that, it can still be filled from a well, so at least entire servers won’t face an extinction event. On top of that, there are a number of inventory issues with items disappearing from loot bags when players use the ‘loot all’ option and loot bags not being dropped at all when a player dismantles a crafting station in use. Graphical glitches have also been noted, mainly with foundations no longer having a visible preview in single player mode.

Fortunately, this latest patch has also fixed a very large number of known bugs and the full list can be seen on their official Steam community page.

Conan Exiles can be purchased through Steam for $29.99/£26.99 and is currently in early access.